A new poll by SolarCity shows that more Americans are going green by changing their lightbulbs to LEDs.

SolarCity ( SCTY.DL ) recently partnered on a nationwide poll of American homeowners to determine their thoughts on going green. The poll found that overall, 88% of respondents supported renewable energy. Even better, at least in terms of SolarCity's future business, was that 62% of respondents would be interested in adding solar to their homes. That represents a significant potential market for SolarCity, considering that there are 75 million owner-occupied housing units in the U.S., while just 500,000 solar systems have been installed nationwide.

Where the green dollars are being spent
That said, in the near term, most homeowners were planning smaller-scale clean-energy-related upgrades to their home over the next year. What was interesting was that the planned purchase that was most popular with homeowners was LED lightbulbs. Overall, 31% of respondents were planning to buy LED lightbulbs in the next year. Also popular were smart thermostats such as Google's ( GOOGL 0.62% ) Learning Thermostat, better insulated windows, hybrid cars, and a more efficient water heater. 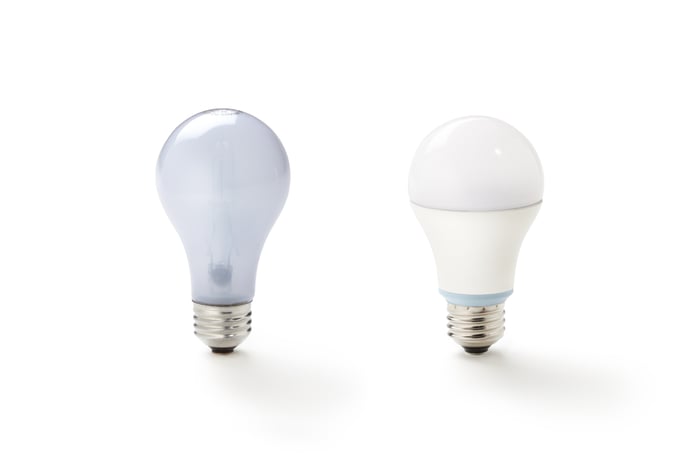 One of the reasons many consumers will be making the switch to LEDs is that they don't really have much choice. The Energy Independence and Security Act of 2007 mandates that all 60 W and 40 W light bulbs sold this year must be 25% more efficient, which effectively bans the production of traditional incandescent bulbs. Since these sizes happen to be the most popular ones in America, many Americans will be replacing them with either CFLs or LEDs. While LEDs cost more, the energy savings are substantial, making it the bulb of choice for many Americans.

General Electric ( GE 0.75% ) has a great energy savings calculator that shows just how much money can be saved by switching. For example, by replacing just one 60 W bulb with a GE energy smart LED 11 W bulb, an average consumer would save $5.90 per year in energy costs. That puts the payback period at less than three years. Add the fact that one GE LED bulb lasts 25,000 hours, or the life span of 25 incandescent bulbs, and the return on investment is pretty compelling.

Two other great options
Each of the other green options that homeowners are considering has a varying degree of financial payoff. For example, the 11% of homeowners who are planning to purchase a smart thermostat such as Google's $249 Learning Thermostat will save hundreds of dollars each year on their utility bills. Using the Learning Thermostat as an example, on average homeowners installing the Google thermostat will save 20% on their utility bills each year, or an average of about $173 per year. That makes for a less than two-year payback period. For a consumer who either doesn't have a programmable thermostat yet or just hasn't programmed it, the Google Learning Thermostat is a great green investment.

Another popular green option is an Energy Star-rated water heater, which 9% of those polled plan to have installed in their home this year. Given that the water heater is the second-largest energy expense for a homeowner, or 14%-18% of utility costs, consumers can gain substantial savings from this upgrade. In fact, homeowners can save anywhere from 7% on their utility bills to up to 50%, depending on which model is selected. In most cases, a homeowner can see a payback in just a few years by replacing the water heater.

Final thoughts
For a homeowner, going green can be a solid investment. An investment of a few hundred dollars will allow a homeowner to swap out incandescent lightbulbs with LED bulbs from a company like GE or buy a Google Learning Thermostat and earn a payback in as little as two years. Meanwhile, more intensive investments like a highly efficient water heater or even a solar system from SolarCity also have a pretty compelling return on investment. All told, it makes a lot of sense to invest in greener solutions, as it's better for our environment as well as for your wallet.