Sci fi becomes reality, and Boeing and Facebook see nothing but upside. 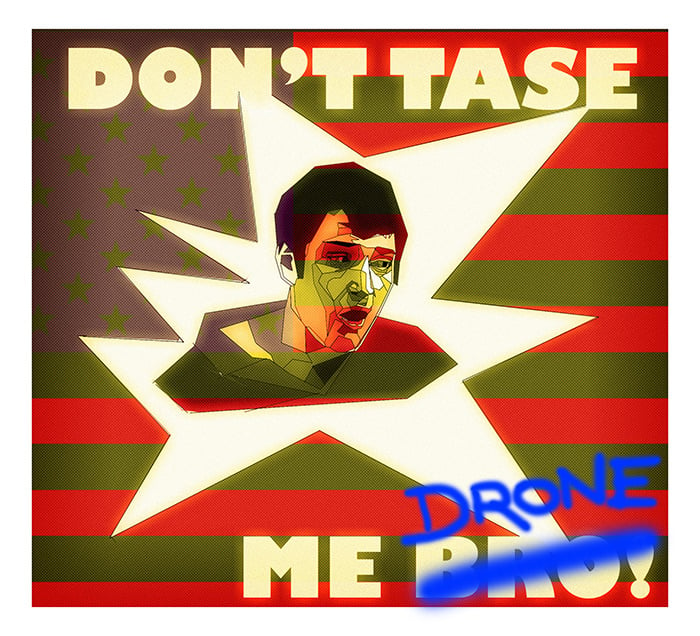 Drones are suddenly everywhere you look, like some science fiction movie come to life. Just a few days ago, we saw footage of a drone tasing a guy at the South by Southwest music festival, and another drone shot aerial footage of this week's tragic building collapse in Harlem. If things continue on their current trajectory, drones will soon be delivering your Amazon ( AMZN -0.14% ) packages and Domino's pizza. By turns creepy and exciting, drones are about to change our lives considerably, and Amazon won't be the only one driving that train.

You might think I'm exaggerating a bit, but all you have to do is follow the money. In 2013, some of the major drone manufacturers, including Boeing ( BA 6.86% ), collectively shelled out almost $26 million to a lobbying group called the Association for Unmanned Vehicle Systems International, which promotes further legalization and advancement of drones and robots. Boeing is practically salivating at the market potential, with good reason.

Drones have gotten plenty of bad press recently, and much of it is warranted. As a society, we need to consider the serious implications that arise from sending a machine to do our bidding, particularly in the context of war or conflict. However, let's also look at a few ways in which drones could help to solve some sticky problems of modern life.

If you've heard about drones in the civilian world at all, you've probably heard about them delivering packages, beer, or pizza. Amazon made a big splash when the company announced its desire to use drones to deliver customers' packages, although that dream won't become a reality anytime soon. Our government is still muddling through how to regulate drones, and until that framework is in place, companies can't just start using them at any sort of scale. Still, Amazon's Prime Air plan, which would use drones to put products in consumers' hands within 30 minutes of a purchase, sure has a dazzle factor. But that's just the tip of the iceberg...

Connecting 5 billion people to the world wide web
This month, we learned that Facebook ( FB -0.23% ) plans to buy a drone production company, with the goal of using solar-powered drones to provide access to the Internet in remote corners of the world. It's part of Mark Zuckerberg's aim for Facebook and other tech giants to bring the massive benefits of modern communication technology to the world's 5 billion people who currently lack connectivity. Because what could be more altruistic than giving poor kids the chance to look at pictures of your lunch on, well, Facebook?

My cynicism aside, increasing global access to modern communication can help make life better for a lot of people. It's just that if Facebook's drones provide that access, it's only the first step. Users don't benefit much if they don't have a connected device, or don't know how to use a browser, or don't have access to e-commerce (many of these folks are also unbanked). Heaven forbid, they might not know how to access Facebook.

Blasting China's Airpocalypse
China has hatched a fascinating and ambitious plan for drones to help mitigate one of the country's more pernicious problems. Many Chinese cities have been suffocating recently under what people are calling an "Airpocalypse": smog from coal-fired power plants and vehicles that blankets urban areas with toxic air. While the Chinese government is taking steps to prevent such smog in the first place, it recently announced plans to use drones to clean up the air.

Later this month, China will test out its new drones to see if they are effective in combatting smog. The drones will spray a chemical into the air that freezes pollutants and causes them to fall to the ground. Presumably, someone would clean up the smog-chunks all over the city afterwards. If successful, the Chinese government may get more drones and deploy them in multiple cities.

All of that other stuff is exciting, but the greatest commercial potential for drones may be in an agricultural setting. Drones are perfectly suited to monitor large farms, apply fertilizer and water at the lowest possible levels for optimal plant growth, pollinate trees, and plant and harvest crops. They have the potential to change the face of modern farming.

The implications are vast.

None of this is going to happen tomorrow, but it is just around the corner. The Federal Aviation Administration is supposed to put out some rules for commercial drone use in 2015. Amazon and Boeing are lobbying themselves blue in the face to make sure those rules work in their favor. As with so many technological developments, the brave new world of drones is full of risk and opportunity. I just hope they make one that does dishes.