While it did not even make the list at the U.S. box office, Beijing Love Story was No. 3 on the international charts during the third week of February 2014 according to Hollywood Reporter. A spin-off of a popular 2012 Chinese TV series by the same name, this sappy love story captivated Chinese viewers. The movie was hardly seen by viewers in North America, but its performance in China was still strong enough for it to earn a high place on the international box office charts.

Why should you, a Hollywood-loving movie-goer (and investor) care about this Chinese movie?
The films that reach the top of the U.S. box office results are generally the same films that reach the top of the international charts because Hollywood movies are popular around the world. MGM's The Hobbit: Desolation of Smaug was the number one movie during the same week when Beijing Love Story was number three. U.S. charts usually indicate the profitability of a movie; The Lego Movie made about $275 million for its production company Warner Bros. of Time Warner Co. (NYSE:TWX) by the end of its third weekend in theaters. Beijing Love Story fell far short of this result with about $37 million in cumulative profit over a period of the same length. So why should we care about this movie?

We should care because the position of this Chinese-produced movie on the international list shows the growing clout of Chinese viewers and the growing capacity of Chinese film production. The Chinese film industry is starting to gain international recognition as well. In February, the Chinese-produced film Black Coal, Thin Ice won the Golden Bear award for best film at the 64th Berlin Film Festival, along with the the best-actor award. The best cinematography award went to another Chinese film, Blind Massage. While the film industry in China may still be in its adolescence, it is growing quickly.

China's media is booming more than ever, but can Hollywood companies gain from this?
A film industry that can reach $500 million in one month, which outpaces the full-year revenue for the same region in 2007, could be a huge opportunity for Hollywood companies that look to extend their international roots into growth markets. Dreamworks Animation (NASDAQ:DWA) and Disney (NYSE:DIS) have already made large on-the-ground investments in China. Dreamworks and Disney have each partnered separately with the Shanghai Media Group, along with separate other local entertainment investment companies, to build local entertainment branches in the nation. Disney Studios president Alan Bergman said, "Disney's collaboration with SMG adds an exciting chapter of new stories for the next generation of global Disney fans."

Dreamworks Animation's Oriental Dreamworks, a joint venture that includes studios and attractions in Shanghai, is described by the company as a "Chinese content company." The company intends to involve itself in animated TV production, live action films, live action TV, and mobile and Internet content. Oriental DreamWorks is already developing four feature projects that will include Kung Fu Panda 3, one other U.S.-Chinese co-produced animated feature, and two live-action Chinese-language projects. 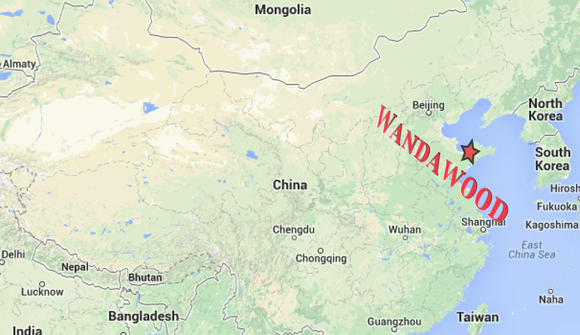 "Wandawood" is preparing to be the Hollywood of China, and soon maybe, the world.

The Hollywood of China
Beijing Love Story is interesting for another reason. The film was produced in part by Wanda Media Group. This is the largest land development company in China, which develops and runs shopping malls, department stores, hotels, and over 500 cinemas. Run by a person who recently became the wealthiest man in China, the Wanda group is now constructing the "Hollywood of China," a media-production complex that will prove to be the most impressive in the world.

The $8.2 billion project will include a 10,000 square-foot main studio, 19 smaller studios, a theme park, seven hotels, an IMAX (NYSE:IMAX) research center (the company has also inked a deal to place up to 120 IMAX screens in Chinese cinemas), a film museum, a waxworks center, and even a year-round automobile and yacht trading center. This "Oriental Movie Metropolis" is set to open in 2016. The CEO, Wang Jianlin, has said that China will have the world's largest film industry by 2018. He predicts that China will surpass the U.S. in box-office revenue by 2018 and double U.S. box-office sales by 2023.

Why U.S. entertainment investors should be excited about a booming Chinese film industry
The film industry is booming in China, and this is good for Chinese companies as well as the Hollywood companies which partner with them. Disney Studios president Alan Bergman said, "Disney's collaboration with [Shanghai Media Group] adds an exciting chapter of new stories for the next generation of global Disney fans." Entertainment companies can benefit from growth in their consumer base as hundreds of millions of Chinese consumers become regular movie audiences. Smart investors will keep watching to see which companies, such as Disney, Dreamworks, and IMAX, take advantage of this trend.