The wisdom of investing in stocks that pay dividends will never go out of style. For investors in the health care sector, however, dividends are rare, as most health care companies choose to use their cash to invest in their clinical pipelines, which is a capital intensive endeavor.

A clear exception to this trend is PDL BioPharma (NASDAQ:PDLI), the inventor and chief patent holder of humanized antibody technology. Instead of using their so-called Queen patents that cover this core technology to develop new drugs, the company has chosen to license out these patents in exchange for a stable revenue stream. To date, this strategy has worked well for both the company and investors alike, as the company has consistently paid one of the highest dividends in the health care sector for four years running. That said, the last of the Queen patents is set to expire at the end of this year, and it was considering ceasing operations.

Recent developments at PDL BioPharma, however, have changed the outlook of the company. As such, I believe Foolish investors would be wise to take a deeper look at this rare stock. With that in mind, here are my 5 reasons PDL BioPharma could be an excellent investment this year.

Reason No. 1
PDL offers the highest dividend in the health care sector at $0.60 a share, or 7.20% at current levels. Although the last of the Queen patents is set to expire at year's end, management has made it a priority to return equity to their shareholders via a large quarterly dividend, and there is good reason to believe PDL will have enough income to stave off a dividend reduction when the Queen patents finally expire (see below).

Reason No. 2
The three-year long suit with Genetech and its parent company Roche (OTC:RHHBY) is finally over, providing investors with clarity on future revenue. As a refresher, Roche disputed that it was infringing upon PDL's Queen patents on new and existing products like Avastin, Herceptin, Lucentis, Xolair, Perjeta, Kadcyla and Gazyva. Per the terms of the agreement, Genentech will pay a fixed royalty of 2.125% on worldwide sales of these products, compared to a blended royalty rate of 1.9% under the prior agreement. Most importantly, this deal allows PDL to recognize revenue from its Queen patents until 2016, which should help to soften the blow upon expiration.

Reason No. 3
PDL dramatically reduced its long-term debt from $180 million to $48 million via two recent financing deals. The net effect of these deals is to lessen the burden of future dilution on dividend payouts, helping the company to maintain the dividend at current, or near current levels.

Reason No. 4
As previously mentioned, PDL was considering closing its doors at the end of 2014 due to the expiration of the Queen patents. As a result, the stock has fallen well off of its previous highs in 2013, shown by the chart below. Now that management has provided clarity on continuing operations, I think the stock stands a good chance of moving higher from here. And indeed, shares of PDL rebounded nicely from their mid-February lows when the company was mired in uncertainty. 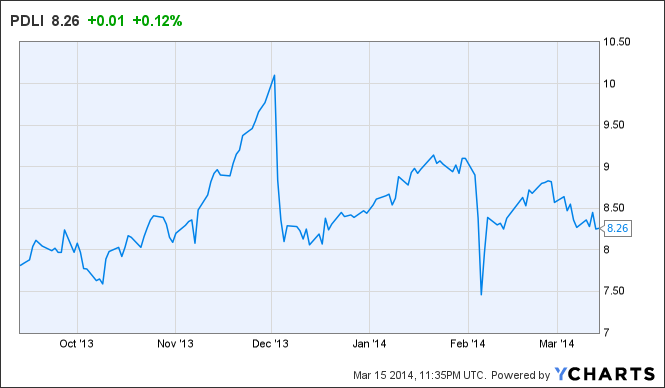 Reason No. 5
Perhaps the most compelling reason to invest in PDL is the impressive number of financing deals it has completed over the past two years. Specifically, PDL's management has now inked 10 financing deals worth a total of $546 million, with both public and private biotechs. In exchange for critical financing, PDL has gained the right to royalty and milestone payments from a plethora of biotechs in the coming years.

Some of the highlights include a $240.5 million financing deal with DepoMed (NASDAQ:ASRT) for its Type 2 diabetes products and a deal worth up to $70 million with Durata Therapeutics (NASDAQ: DRTX) for its novel antibiotic, dalbavancin indicated as a treatment for skin infections. Notably, the deal with DepoMed is already paying off, with PDL banking $11.2 million in royalty payments in the fourth quarter of 2013.

Looking ahead, Durata's dalbavancin will be reviewed by the U.S. Food and Drug Administration on May 26, where it is widely expected to gain approval based on the strength of its late-stage clinical trial results. Consequently, there is a good chance this deal will also bear fruit.

Foolish wrap up
PDL is presently rebounding from the uncertainty surrounding the expiration of the Queen patents, and the future looks bright. Although there will be some bumps along the way, the bevy of financing deals and the settlement with Roche should help the company transition into the next phase of its life cycle.