Please ensure Javascript is enabled for purposes of website accessibility
Free Article Join Over 1 Million Premium Members And Get More In-Depth Stock Guidance and Research
By Justin Loiseau - Mar 17, 2014 at 11:52AM

Overall industrial production expanded by a surprisingly large 0.6% for February, according to a Federal Reserve report (link opens as PDF) released today.

After production contracted a revised 0.2% for January, analysts had expected a subdued reversal to 0.3% growth.

By major market groups, final products made the most headway, up 0.9% month over month. The group saw its biggest boost from business equipment (+1.3%), but consumer goods also added a substantial 0.8%. The lowest performer was construction, increasing just 0.2% from January to February.

Breaking production down by industries, manufacturing made major moves. Analysts had expected just 0.3% growth, but the actual number came in at 0.8%. Mining managed 0.3% growth, while utilities were down 0.2% to register the only red number..

Looking back over the past 12 months, overall industrial production is up 2.8% comparing February 2014 to February 2013. Despite a tough February, utilities still managed to register the strongest growth at 8.3%. 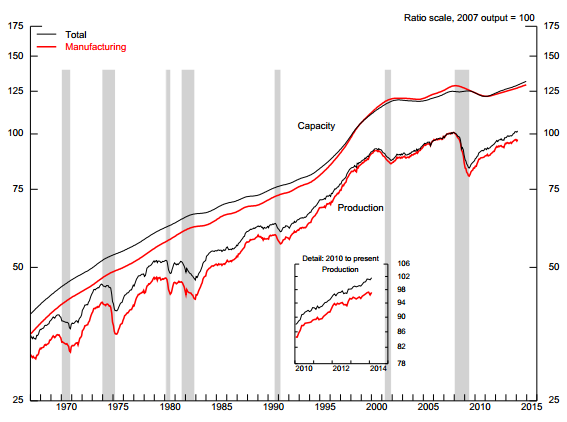