Tesaro's (NASDAQ: TSRO) CEO Lonnie Moulder is likely unfazed by the company's eye popping volatility over the past few months. Moulder has a long history of navigating the inherent booms and busts common in emerging biotech. Luckily for Moulder's investors, Moulder has often found himself on the winning side of that equation.

Prior to co-founding Tesaro in 2010, Moulder was the President and CEO of Abraxis Biosciences, the company that developed potential blockbuster cancer drug Abraxane, and was sold to Celgene for $3 billion in 2010. In addition to orchestrating Celgene's acquisition of Abraxis, Moulder also previously served as President and CEO of MGI Pharma, a company that developed oncology products that was sold to Japan's Eisai for nearly $4 billion in 2007.

At Tesaro, Moulder is trying to duplicate his prior successes by in-licensing oncology compounds, like Opko's (NASDAQ:OPK) rolapitant, and technology, such as his recent deal with AnaptysBio. 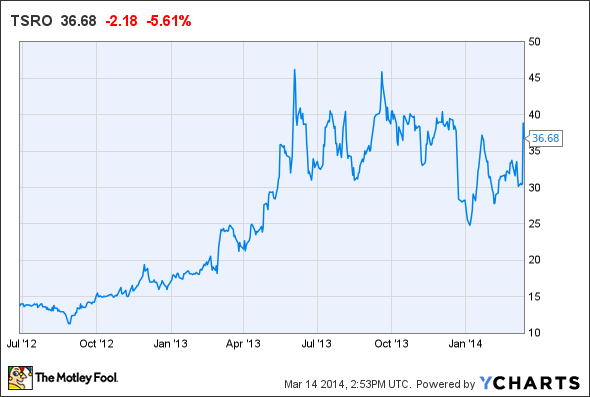 The deal gives Tesaro the right to further develop oncology antibody drugs developed using AnaptysBio's SHM-XEL platform. That platform mimics the process of creating antibodies in vitro, allowing for the rapid creation of antibodies that can be designed to alter the immune system.

Novartis is already exploring the use of SHM-XEL in oncology, and Celgene is using SHM-XEL to develop both cancer and inflammation therapies.

In Tesaro's case, the antibodies covered by the deal block cancer's ability to co-opt immune cell receptors including PD-1, TIM-3 and LAG-3, reducing the immune system's ability to find and destroy cancer cells. The companies think the SHM-XEL approach may be able to modulate signaling ligands to restore the body's ability to fight cancer.

In exchange for the use of AnaptysBio's technology, Tesaro is handing over $17 million up front and paying for all the development costs associated with potential candidates. Tesaro could also end up paying AnaptysBio up to $108 million in milestone payments per program, as well as single digit royalties if any of these candidates is ever commercialized. However, that could be years away given all the antibody candidates remain in the pre-clinical stage.

A good time to bulk up its pipeline
Tesaro's in-licensing announcement comes after its shares fell sharply following news in December that its most advanced clinical compound, rolapitant, failed to achieve secondary endpoints in a key phase 3 trial.

However, the anti-nausea compound did meet its primary endpoint for reducing vomiting, and Tesaro still expects to file for FDA approval this year.  If rolapitant wins FDA approval, Opko, which owns a 10% stake in Tesaro, stands to receive double-digit royalties on sales.

Those potential sales may be smaller due to failing the secondary endpoint given that disappointment may open the door for a competing anti-nausea therapy from Insys (NASDAQ:INSY). Insys is developing an oral version of its generic Marinol capsules, a compound that is derived from THC, the psychoactive compound found in marijuana. The capsules are currently marketed as treatments for both chemotherapy and HIV patients. Insys expects to file for approval of its oral formulation this year.

Fool-worthy final thoughts
The agreement with AnaptysBio reinvigorates speculators enthusiasm in Tesaro. It gives the company potential pre-clinical opportunities that could eventually help fill its clinical pipeline. Although Tesaro may end up with its first commercial product in 2015, it doesn't have any sales yet. That means it will have to pay to develop these antibodies out of cash.

Fortunately, Tesaro is debt free and exited last quarter with $130 million in cash on its books. It added another $94 million thanks to a secondary stock offering in February. However, since the company reported a $94 million loss in 2013, investors should approach this speculative play cautiously, at least until there's more insight into potential sales for rolapitant.