If you look at the industry as a whole, then it would be difficult to make a mistake from an investment perspective. On the other hand, you might want to consider some important numbers and facts if you're looking for the best long-term investment.

When three similar companies in an industry deliver positive underlying results, the smallest company will often see the most stock appreciation during bull markets. Investors want to maximize their opportunities during these times. On top of that, and perhaps more important in this case, is that Rite Aid's net income has skyrocketed over the past five years. When you look at the chart below, also notice that SG&A expenses have remained relatively flat -- a good sign: 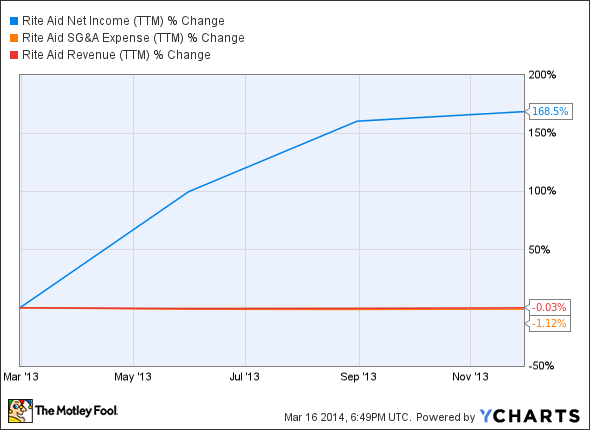 Rite Aid's turnaround on the bottom line has been impressive. On the other hand, revenue has declined 0.03% over this time frame. Comparatively, CVS and Walgreen have enjoyed revenue increases of 41.57% and 17.68%, respectively, over the past five years.

Rite Aid's February comps improved 1.5% year-over-year. Front-end sales slid 1.8%. According to Rite Aid, 0.5% of this decline was due to weakness in flu-related over-the-counter products. A weak flu season (fewer incidents than normal) affected the whole industry. In Rite Aid's case, even if you remove the 0.5% due to weakness for flu medicines, front-end sales still declined 1.3%. It's going to be difficult for the drug stores to compete with the likes of Wal-Mart's small-box stores (in expansion mode) and the dollar stores at the front end of the store going forward. Therefore, those performing best at the back end of the store should offer better odds of long-term success. With that in mind....

Not Wagging the dog
Walgreen's February was more impressive, with comps growing at 4.5%. Without the negative generics impact of 0.9%, comps still increased 3.6%.

Walgreen has another big long-term advantage. Along with Alliance Boots, Walgreen owns a stake in Amerisource Bergen Corp. (NYSE:ABC). By taking this stake, Walgreen has set itself up for success in the generic space, which is in-line with industry trends. By buying generics in bulk, Walgreen will be able to negotiate better prices, which should lead to higher margins and an improved bottom line.

I am very pleased with our fourth quarter results, which came in at the high end of our expectations and helped produce a record year. As expected, the quarter was somewhat atypical, largely due to the timing of Medicare Part D profits within the PBM and the timing of break-open generics across the enterprise. Overall, the year 2013 produced strong growth in revenues, gross margin, operating margin, and earnings across the enterprise.

Cash flow advantages
Over the past year, Rite Aid has generated operational cash flow of $728.27 million. It's good to see positive cash flow, but this is nothing compared to Walgreen and CVS, which have generated $3.83 billion and $5.78 billion in operational cash flow over the same time frame. Smaller companies can hold their own, and even thrive, when the world is bullish, but when the tide goes out, the most fiscally sound companies often outperform their peers.

An investment perspective
Rite Aid might be the hottest investment of the three right now, but if you're looking to invest in the strongest underlying business with the best odds of long-term success, then it's likely to be Walgreen or CVS, with Walgreen holding a slight edge thanks to its Amerisource Bergen deal. Walgreen also offers a dividend yield of 1.90%, whereas CVS yields 1.50%. Rite Aid doesn't pay a dividend. Please do your own research prior to making any investment decisions.