Weakness in consumer confidence in the U.S. has taken a toll on many companies. This is especially the case among the food companies which have had difficulty attracting customers. For example, Mondelez International (NASDAQ:MDLZ), a snack-food company, is facing problems with lower demand which are evident in its recently posted fourth-quarter results. The numbers could not meet the Street's expectations, so Mondelez' stock price fell.

A lackluster performance indeed
Total sales dropped by 0.1% over last year, affected by lower coffee prices and weakness in biscuit sales in China. Organic revenue, which excludes the effect of acquisitions and divestitures, grew 2.5% to $9.49 billion, helped by higher volumes. However, the company failed to meet the estimates, which called for revenue of $9.57 billion.

Although earnings jumped to $0.42 per share from $0.38 per share last year, the estimates had called for $0.44 per share. The increase in earnings was driven by lower coffee costs which increased Mondelez' profits.

Although Chinese demand for biscuits was disheartening, overall revenue from biscuits grew 7%. The Oreo category did well with double-digit growth, which pushed annual revenue to $2.5 billion. The chocolate category too grew by 6% and the company believes that these segments will continue to boost its revenue in the future.

Competitors' stories
Although Mondelez International's performance was not up to the mark, its competitors posted great numbers. For example, Hershey (NYSE:HSY), which competes with Mondelez in the chocolate category, registered great fourth-quarter numbers. Its revenue surged 11.7% over the year-ago quarter to $1.96 billion, which surpassed the estimates. Its growth was driven by increased demand for its products which led to higher volumes.

Hershey also increased its promotional efforts during the holiday season, which pushed sales north. The chocolate maker has undertaken a significant number of efforts to grow. For example, it acquired Brookside Foods in January 2012 in order to expand its product portfolio with chocolate-covered fruit juice items. It also expanded Hershey's geographical footprint.

Even snack maker J&J Snack Foods (NASDAQ:JJSF) delivered staggering first-quarter numbers which beat investors' expectations. Both the company's top line and bottom line jumped 6% and 22%, respectively. One of the key drivers for the increase was higher soft pretzel sales. The snack maker has been strengthening its presence in the pretzel market. Hence, it acquired Kim & Scott's Gourmet Pretzels in June 2012 and New York Pretzel in October 2013. The benefits of these acquisitions are evident from its recent quarterly numbers.

Both Hershey and J&J Snack Foods have outpaced Mondelez in terms of stock price appreciation in the last five years, which is shown in the chart below: 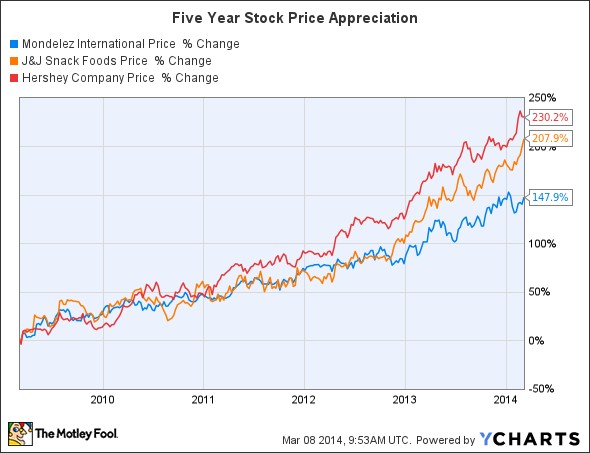 With returns of 230.2% and 207.9%, respectively, Hershey and J&J have provided much higher returns than that of Mondelez. Therefore, it is important for Mondelez to grow its revenue so it can outperform its industry peers.

Ray of hope
Despite posting a disheartening quarter, Mondelez provided a bright outlook on its current fiscal year. It expects its organic revenue to grow by 4% and the earnings estimates stand between $1.73 and $1.78 per share. This guidance exceeded the $1.71 expected by analysts.

Also, the company expects to continue its expansion in the emerging markets along with its initiatives to reduce costs and improve the product mix. Moreover, Mondelez International's innovative packaging of Oreos and its stronger marketing efforts should continue to drive its sales higher.

Final thoughts
Although the snack retailer's outlook gives reason to celebrate, the company's past performance and inability to outperform other players are matters of concern. Its inability to attract customers and live up to its estimates are reasons enough to stay away from Mondelez. If you still want to invest in the snack-making industry, Hershey and J&J Snack Foods are safer bets.