Please ensure Javascript is enabled for purposes of website accessibility
Free Article Join Over 1 Million Premium Members And Get More In-Depth Stock Guidance and Research
By Tyler Crowe - Mar 18, 2014 at 10:10AM

Three companies -- Fuel Cell Energy, Plug Power, and Ballard Power Systems -- have all seen their shares taken over by speculative traders. Do any of them make sense as real investments?

Watching the price of a stock change over a couple of months is normally a waste of time for investors, but when three companies that specialize in an energy technology that could revolutionize power usage surge more than 150% in a couple of weeks -- and one of them is still up more than almost 1,000% -- it's definitely worth looking into.

Price surges like this don't happen in a vacuum. I mean, we're not talking about Bitcoin here. Behind the curtain of wild stock prices and screaming pundits, there are actual businesses somewhere. So let's take a deeper look at these three fuel cell specialists -- Plug Power ( PLUG 0.49% ), Ballard Power Systems ( BLDP 1.12% ), and Fuel Cell Energy ( FCEL 0.80% )-- and see whether these these stock swings have anything tangible to them and whether they are truly worthwhile investments. 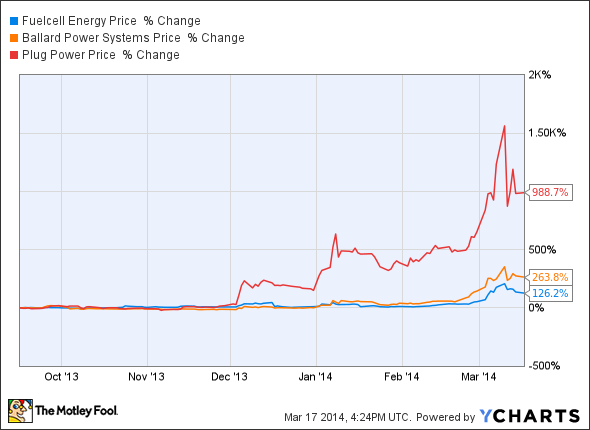 We didn't start the fire
Fuel cells have been a hope and a dream in the energy space for decades. It's not a perfect comparison, but a fuel cell works rather like a battery, but you can recharge it with pure hydrogen gas instead of electricity. Many hope that fuel cells could be the next evolution for larger-scale energy storage because they can charge much faster and, in theory, can store eight times more energy than a traditional battery of similar size. So the company that can perfect this technology and make it commercially viable stands to make a lot of money.

So if there is a string of good news surrounding one of these companies, you can see why it can instantly send the market into a frenzy.

This recent wild ride all started during Plug Power's conference call back in December, when CEO Andy Marsh stated that the company was on the verge of securing a major deal for its GenDrive fuel cell systems. This promise came to fruition when it announced that Wal-Mart had ordered 1,700 of these units, 44% more than all of the units it has sold to its four largest customers. Add a few contract renewals, a test program with FedEx to extend the range of electric delivery trucks, some bullish and bearish analyst reports, and an earnings release that showed the company was starting to show life and you get the recipe for a 1,500% surge.

So where does Ballard come into place? Interestingly, all of Plug Power's fuel cell systems use Ballard's fuel cell stacks. Yes, you heard that right. Plug Power does not actually manufacture fuel cells -- it builds "fuel cell systems." These systems are drop-in replacements for lead-acid battery found in forklifts and other material handling equipment you find in distribution centers and warehouses. So by default, any good news from Plug Power is good news for Ballard.

Fuel Cell Energy, on the other hand, has pretty much been along for the ride. Aside from the term "fuel cell," these companies have absolutely nothing in common. Fuel Cell Energy develops larger-scale fuel cells that convert natural gas to hydrogen gas, which then generates electricity without combustion. Plug Power's fuel cell systems -- which, remember, are actually Ballard's fuel cells -- use hydrogen gas directly and are used on smaller-scale power needs.

Both compete in completely separate markets and are more or less independent of each other, despite Wall Street's perception that fuel cell stocks are all the same. Ballard is pretty much the sole link between the two. It manufactures both hydrogen gas-fueled cell stacks for Plug Power and competes with Fuel Cell with its own natural gas-powered units.

Fuel Cell Energy did announce a few sizable orders and growing sales numbers at its most recent earnings release, but it also raised about $31 million from an equity issuance and reported yet another EBITDA loss. Not exactly a series of events that should result in a 150% uptick in share price.

The business behind the spectacle
Considering all the hype around them, you might assume these companies are fresh off IPOs or are penny stocks. They're not. All of these companies have been in business for more than 15 years and have market capitalizations above $600 million. Over that long history of being in business, each has incurred some heavy losses. That should be expected, though, because this is a technology that has taken decades to develop into a commercially viable product. And even though these companies have started to find some limited commercial success with their offerings, they all compete in very niche markets because of several technological and logistical limitations.

Example: Companies like Tesla Motors and Westport Innovations ( WPRT 1.66% ) may struggle with a lack of infrastructure for alternative fuel transportation, but it isn't even close to the weakness of hydrogen gas infrastructure. There are only 10 public hydrogen fueling stations in the entire United States. This makes it next to impossible for a hydrogen-powered fuel cell to exist beyond short route deliveries with a central hub for refueling.

Plug Power could very well dominate the material handling market, but the entire North American market is only valued at $800 million. The company is looking to expand into three more potential markets: refrigeration units for long-haul trucking trailers, ground support vehicles at airports, and battery replacements in electric hybrid package delivery trucks. These could drastically expand Plug Power's market, but it doesn't have any real offerings in these markets as of yet.

Fuel Cell Energy and Ballard Power systems don't exactly have a yellow brick road ahead of them, either. Their fuel cell power plants are looking to break into the remote power (places not connected to the electric grid), emergency backup power (hospitals, critical infrastructure), and combined heat and power (universities and corporate campuses) businesses. This space is becoming more and more competitive because of the efficiency gains on smaller-scale natural gas fired turbines. Capstone Turbine ( CPST 7.04% ), the most direct competitor in the small-scale distributed power market, has developed high-efficiency gas turbines that are on par with fuel cells in terms of efficency. But Capstone's turbines also are able to run on a wider range of fuels and have a lower cost of ownership.

Can fuel cells power a portfolio?
If you are looking to buy shares in a fuel cell company, you are probably looking at the future promise of the companies rather than past results. When potential comes into play, it's much harder to value a company. So let's compare these three companies with two others that are in a similar boat: natural gas engine designer Westport Innovations and natural gas turbine manufacturer Capstone Turbine. The two common threads between all of these companies is that they are all trying to fundamentally change the way we generate or use energy, and all are not yet profitable ventures. Without any net income to speak of, here are two metrics: price to average expected total revenue for the next 12 months based on analyst estimates and the compounded annual growth rate of sales over the past five years.

What really stands out about this is Plug Power, despite having close to the lowest sales growth numbers in the most niche market of all the players mentioned here, it is currently priced at a premium more than double anyone else's. So it's pretty safe to say that the price for Plug Power is wildly out of touch with the fundamentals of the business.

Based on the valuations, the estimated sales growth, and the constraints that fuel cells face over the next couple of years, it's awfully hard to see any of these businesses as sound investments today. If forced to make a choice, though, Ballard Power Systems is probably the best bet. It has more diverse product offerings and can compete in many more markets than the other two companies, and any success that Plug Power has in capturing market share in other realms will result in a win for Ballard.

What a Fool believes
It is impossible to predict what the stock price on any of these companies will be in the near future, and anyone who does is probably just darn lucky. Plug Power's announcement that it had secured orders from Wal-Mart and is testing the waters with FedEx are good news for the company -- and, by default, Ballard -- that deserves some love from Mr. Market, but it certainly was not enough to merit a jump of 1,500%, or 1,000%, or basically any value the market has assigned these shares in the past several weeks.

These fuel cell stocks are likely to continue their bumpy ride for quite some time. So anyone who wants to invest in these companies for the value of the business rather than share-price speculation should probably stay away while the trading hysteria continues.