IMAX (NYSE:IMAX) describes its entertainment experience as "so real you feel it in your bones." With 837 theaters, up 14% since 2012, in 57 countries and a plan to grow its presence by the hundreds in the coming few years, IMAX may be an investment opportunity as big as its screens.

With good 2013 year-end results, is there more growth ahead?
IMAX reported 2013 year-end results in February. The company posted a revenue increase of 1.8% year-over-year as revenue rose from $282.8 million to $287.9 million. This mainly occurred because fourth-quarter revenue jumped to $105 million from $77.4 million in the year-ago period.

In an interesting highlight of the 2013 release, joint revenue-sharing arrangements came in at $24.5 million, up from $17 million during 2012. These agreements have helped to drive growth for the company in 2014 as movie-making companies see the lucrative benefits of having their movies screened in IMAX theaters.

Growth led by better technology
The company prides itself on its industry-leading technology. For films that do not use IMAX-specific cameras, the company uses industry-leading digital remastering, or DMR, technology to make the films big-screen ready. The technology includes advanced lighting, sound, and other features. The James Bond film Skyfall received alterations in the post-production process which used this technology to prepare the movie for IMAX screens, and as a result audiences actually got to see 26% more of the originally captured images.

This technology has helped to give IMAX a competitive advantage. Gross box office from DMR titles reached $244.5 million in 2013, up from $152 million in the prior year. The average global DMR box office per-screen in the fourth quarter rose to $366,300 from $264,400 during the same period of 2012.

International growth led by China
During 2013, IMAX installed 112 new theater systems across 23 countries. Going forward, China will provide the largest growth market for the company. The Chinese movie industry has been ballooning, and expectations call for the industry to surpass that of the United States in three years and double that of the U.S. by 2025. 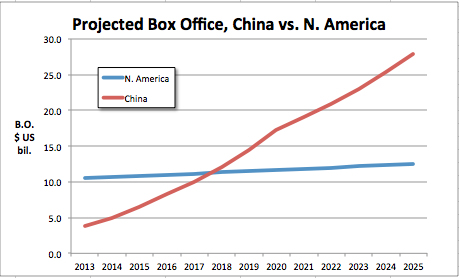 One Chinese company currently seeks to build the "Hollywood of China," and plans the impressive feat of opening the world's largest entertainment production facility in 2016. The USD $8.2 billion (about RMB 50 billion) investment by the real estate and entertainment company Dalian Wanda Group will include a 10,000 square-foot main studio, 19 smaller studios, a full theme park, and many other features. Importantly, the facility will house an entire IMAX research center just for researching and enhancing the technology and performance of IMAX.

IMAX has already benefited from the Wanda Group with a deal to build 210 large-format theaters in the country by 2021. Last year, IMAX signed a deal with a South Korean company to build 30 more IMAX movie screens in China and five in South Korea.

Competitors in the space: Certainly cheaper than IMAX, but in exchange for what growth prospects?
Two local competitors, Regal Entertainment (NYSE: RGC) and Cinemark Holdings (NYSE:CNK), have also been vying for the eyeballs of moviegoers. With a 4.90% yield, Regal Entertainment looks good in a long-term portfolio. Add that to net income growth of nearly 11% from $142.3 million to $157.7 million in the fourth quarter of 2013 and the company looks strong.

With a smaller yield of 3.10% and profit that decreased 12% for the same period even though sales rose, Cinemark doesn't seem so impressive. However, the company had a one-time debt write-off during the fourth quarter. If investors look past that, the company would have reported a 10% net income increase. Of the three, Regal and Cinemark cost much less than IMAX with P/E multiples of 17 and 21, respectively, in comparison with that of IMAX at 44. However, as discussed above, with IMAX you pay for future growth and a company that has committed itself to shaking up the traditional movie theater experience.

Foolish takeaway
You will pay for the opportunity to grow with IMAX, since at a P/E multiple of 44 it's not cheap. However, in this space IMAX has the best future growth opportunities and ways to gain from international and technology trends. For those who remain uncomfortable with buying into a business at such a high valuation, both Regal and Cinemark look like they could be good buys, especially Regal. However, for those who are looking for a company that's making waves in its industry and growing into new markets, IMAX might be that company.