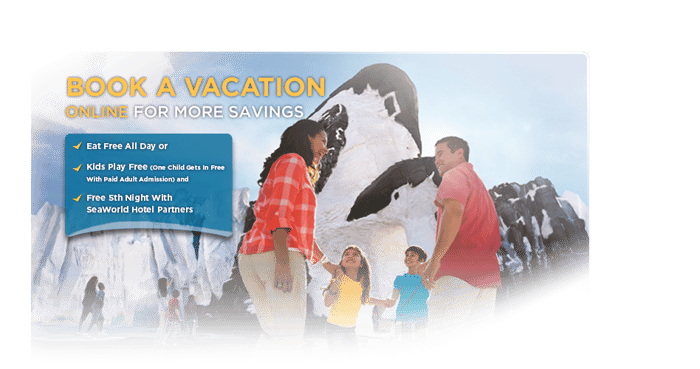 SeaWorld Entertainment (NYSE:SEAS) is a difficult company to figure out. On one hand, it delivered impressive revenue, adjusted EBITDA (Earnings before interest, taxes, depreciation, and amortization), and adjusted free cash flow improvements in 2013. On the other hand, the Blackfish documentary has led to a significant public backlash.

To add fuel to this fire, a California state legislator recently proposed to ban the captivity of killer whales in the state of California, which could lead to significant pain for SeaWorld's San Diego location. Fortunately, there's an easy solution for investors.

Only the numbers
In 2013, SeaWorld's revenue, adjusted EBITDA, and adjusted free cash flow increased 3%, 6%, and 52%, respectively. Revenue per capita increased 7%, but attendance declined 4.1%. Revenue increased despite declining traffic due to price hikes.

In the fourth quarter, revenue increased 3% year over year, but adjusted EBITDA slid 6%, and there was a net loss of $13.5 million. The net loss was expected since SeaWorld primarily relies on profits in its second and third quarters. However, the concern here is that SeaWorld only lost $8.5 million in the year-ago quarter.

Also in the fourth quarter, admission per capita grew 4.3% and in-park per-capita spending improved 5.7%, but attendance slipped 1.4%. Ironically, namesake brand locations in San Diego, Orlando, and San Antonio saw record traffic. But keep in mind that SeaWorld owns many other brands, including; Busch Gardens, Aquatica, Adventure Island, Water Country USA, Discovery Cove, and Sesame Place. Even if the company's namesake brand is performing well, it's the overall performance that counts.

Relentless pressure
While standing at a Santa Monica ocean pier with the Blackfish director and two former SeaWorld orca trainers by his side, California State Assemblyman, Richard Bloom, said, "It is time that we embrace that the long-accepted practice of keeping Orcas captive for human entertainment must end."

Former SeaWorld orca trainer, John Hargrove, stated, "This is about greed and this is about corporate exploitation, both of the whales and the trainers, but mostly the trainers."

If this ban comes to fruition, then SeaWorld will take a significant hit, not only financially, but to its reputation. This could also lead to a snowball effect in other locations.

With SeaWorld facing so many headwinds, it will be challenging for the company to reestablish its namesake brand. Given the passion of SeaWorld's adversaries, this will be a long-term fight. Fortunately, investors aren't required to involve themselves in the fracas. There are other ways to invest in the growing theme park industry.

Alternative options ... without the drama
Walt Disney (NYSE:DIS) should be the first option that comes to mind. Not only is it the dominant force in the theme park industry, but it's highly diversified. In addition to theme parks, its other segments include media networks (ESPN, ABC, and Disney channels), studio entertainment (Frozen is a tremendous success), consumer products (Disney will likely capitalize on Frozen's success), and interactive.

And not only is Frozen a huge success, but a sequel, as well as, a Broadway show are planned. Albeit only one part of Disney's entertainment properties, Frozen is a good example of how the company can capitalize on its success in many ways.

Consider top-line growth comparisons between the three companies since January 2012: 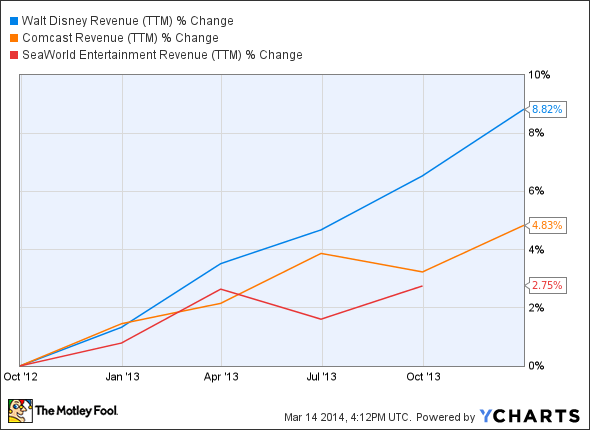 SeaWorld does offer a somewhat generous dividend yield of 2.40%, whereas Disney and Comcast currently yield 1.10% and 1.70%. Still, this doesn't make SeaWorld look more appealing than its peers.

The Foolish takeaway
It's not easy to predict which way SeaWorld will go, but it's a guarantee that it will be facing many headwinds related to public pressure. Given the fact that Disney is growing faster and doesn't come with such PR nightmares, while also trading at a more attractive valuation, you might want to dig deeper on Disney before considering SeaWorld.