Shares of Annaly Capital Management (NYSE:NLY) and American Capital Agency (NASDAQ:AGNC) fell sharply after the Federal Reserve announced on Wednesday it will keep short-term interest rates near zero while continuing to taper its monthly purchases of long-term bonds.

Although the news on the short end of the yield curve is positive for the two companies, as they borrow at short-term interest rates to finance massive portfolios of agency mortgage-backed securities, the same cannot be said for the Fed's decision to further reduce its monthly bond purchases.

These forces create an unhospitable environment for mortgage real estate investment trusts like Annaly and American Capital Agency, both of which hold copious amounts of agency-backed paper in their multibillion-dollar portfolios. Lest there be any doubt, the following chart shows the destruction this has wrought on their book values per share since the beginning of 2012. 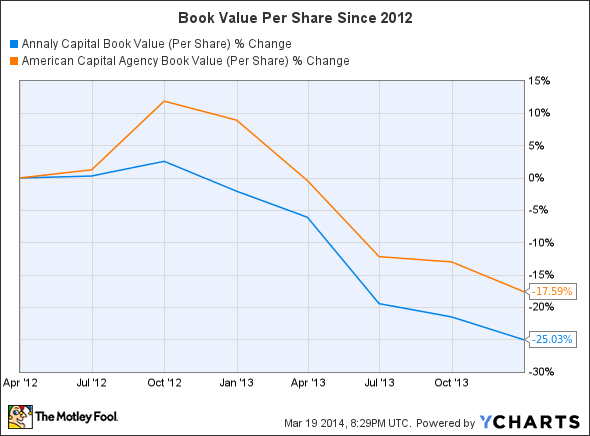