Shares of Bank of America (NYSE:BAC) soared on Thursday following the previous day's comments by Federal Reserve chairwoman Janet Yellen and new predictions the Charlotte-based bank could soon raise its dividend by as much as 400%.

Halfway through the trading session, Bank of America's shares were up by 3%, topping out at $17.98. It's the highest they've been since briefly eclipsing $18 in April of 2010.

It seems safe to say investors are responding first and foremost to the Federal Reserve's comments about future monetary policy. On Wednesday, the central bank intimated it will no longer look exclusively at the unemployment rate to determine when to increase the Fed Funds Rate.

Previously, the central bank said it will begin to move the rate higher once the unemployment rate reaches 6.5%. With the figure now approaching that level -- it was at 6.7% in February according to the Bureau of Labor Statistics -- the news gives banks more time to profit from historically low borrowing costs. 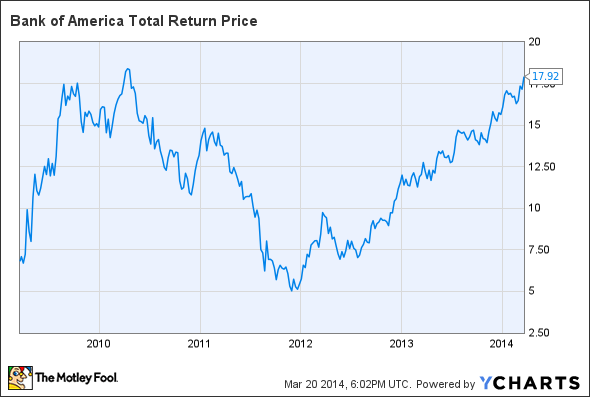 The second reason for today's performance appears to stem from anticipation Bank of America will not only raise its dividend, but do so by upwards of 400% if it gets regulatory approval to do so next week.

The Wall Street Journal published a table on Thursday showing the "average expectations of analysts polled by Thompson Reuters for large publicly traded U.S. banks participating in the Fed's stress test." According to the data, analysts believe that Bank of America will increase its dividend by 406% for the four quarters straddling the next two years.

Perhaps most surprising is the forecast that Citigroup (NYSE:C) will boost its quarterly payout by as much as 1,220%. This is something I've questioned -- most recently, here -- based upon comments from Citigroup's CEO and recent compliance issues concerning its operations in Mexico.

To be clear, however, as the analyst expectations cited by the Journal suggest, there's a decent chance that I'm wrong on this count. And if so, I apologize in advance. Either way, we'll know in less than a week.