Exelon Corporation (NASDAQ:EXC) is getting into natural gas. The company announced yesterday that it is purchasing ETC Proliance Energy, a Midwest regional gas marketer. This isn't your average acquisition, and Exelon could be shaping up for some serious change. Here's what you need to know.

Not your average natural-gas company
ProLiance isn't your average utility. It sells exclusively to commercial and industrial customers, and claims to be one of the largest regional gas marketers in the Midwest. With 2,500 customers spread across eight states, Exelon Corporation expects big things from ProLiance.

Exelon Corporation's merger with Constellation Energy in 2012 was meant to bring more natural gas assets on board, and this latest acquisition is more of the same. By bolstering Constellation's sales with exclusively commercial agreements, Exelon Corporation will be increasing not only its fuel-type diversity, but also its customer diversity.

"ProLiance has a strong reputation with its customers and provides a unique opportunity to grow our gas business in the Midwest," said Mark Huston, President of Constellation's retail division, in a statement. "We look forward to supporting the customer while leveraging a broader array of Constellation products and services."

Going for gas
Exelon Corporation stock has suffered massively over the last few years as natural gas has cut the competitiveness of nuclear energy. While Exelon Corporation enjoys steady sales and predicable costs from its 19,000 MW of nuclear, it simply hasn't been able to keep up with plummeting prices. 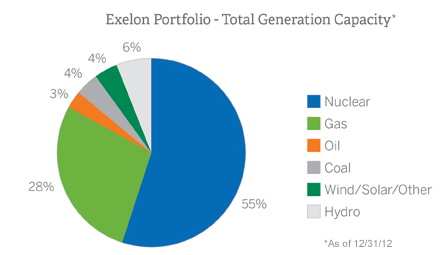 It's not alone, either. While nuclear has suffered, coal has been caught between the ultimate rock and a hard place. Not only has coal's cost-competitiveness suffered, but it's also been slammed with environmental mandates that "clean" nuclear energy has kept away from.

Exelon Corporation may have taken a page out of TECO Energy's (NYSE: TE) book with its latest natural-gas acquisition. As one of the only vertically integrated coal utilities around, TECO Energy hit hard times over the last few years. But its May 2013 $750 million acquisition of New Mexico Natural Gas Company, a regulated utility with 500,000 customers. The move added 50% to TECO Energy's customer base, but more importantly it eased TECO out of its coal addiction.

A powerful pair
Exelon Corporation isn't giving up on nuclear. It holds 20% of the country's nuclear assets, whose power plants provide a whopping 5% of all the U.S.'s electricity. Not only does it have scale and stability on its side, but the Obama administration's Blueprint for a Secure Energy Future have clearly marked nuclear as an important part of U.S. energy policy.

But so is natural gas. With massive domestic supply, increasing export opportunities, and advancing extraction techniques, natural gas is quickly taking its place as a power player. Exelon was right to merge with Constellation Energy in 2012, and this latest ProLiance add-on is another step toward profitable diversification in an area for which it's already intimately familiar.