First Solar (NASDAQ:FSLR) recently held an analyst day that caught the market off guard. Given First Solar's previous bleak guidance, the market was not expecting very much. Rather than more of the same, however, the company offered very bullish projections , leading the stock to rally over 20% to levels not seen since early 2011.

Analyst day details
One big reason for the rally was that First Solar sees growing profits and cash flows in the future. The company has an earnings forecast of $4.50-$6 per share for 2015 versus a forecast of $2.2-$2.60 for 2014. 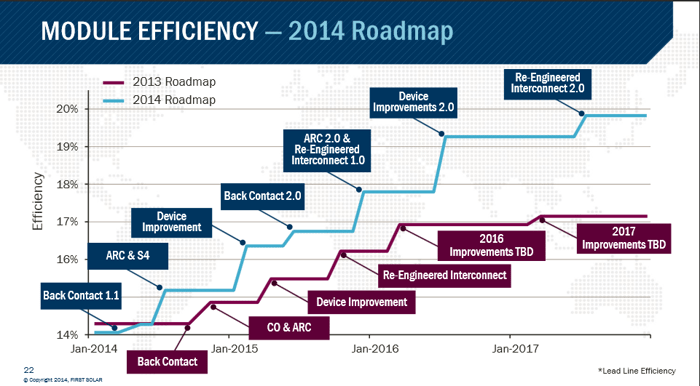 The company originally had a 2013 road-map of attaining 17% efficiency by 2017. First Solar's new road-map calls for a target of close to 20% efficiency by 2017. With more efficient panels, First Solar should realize higher margins, better utilization, and greater demand. The improved efficiency also reassures investors that First Solar will have a competitive product many years down the road and validates management's decision to stick with cadmium telluride rather than adopting polysilicon.

In addition to hearing about better panel efficiency on analyst day, investors also heard that First Solar is making significant progress in entering the rooftop market.

It turns out that First Solar is currently constructing a TetraSun technology pilot factory in Malaysia with an annual capacity of 100 megawatts. TetraSun was the company that First Solar bought April of last year. The company's polysilicon technology converts sunlight to electricity at around 21% efficiency at relatively low cost.

First production should occur in late 2014. First Solar believes that rooftop solar will be a major growth market for the company.

The bottom line
The market likes that the company is making progress in the rooftop market, and I think this is one of the main drivers behind its rally.

Investors have bid up SolarCity (NASDAQ:SCTY.DL) and SunPower (NASDAQ:SPWR) in part because they are doing very well in the rooftop market. Investors are currently doing the same thing for First Solar in anticipation of the company's future rooftop market-share gains.

I believe the optimism is justified. The rooftop market is 45% of the solar opportunity and growing rapidly. With falling solar costs, it is hard to imagine a future without solar panels on a significant percentage of rooftops. That future may still be a decade away, but it will eventually happen. The real question is which companies will win out.

One can argue that First Solar has a strong competitive advantage that should allow it capture significant market share fairly quickly.  The company has a $1.3 billion net cash position. Financing and access to financing is the key to growth in the rooftop market. With a significant part of that $1.3 billion available for financing, First Solar should have no problems growing.

In the near term, First Solar's entry into the rooftop market will not affect SolarCity and SunPower very much because First Solar will be starting off from a very small base. In the long term, First Solar's entry will likely reduce SolarCity's and SunPower's growth rates. That being said, barring one company making a proprietary technology breakthrough, the rooftop market is not a winner-take-all market where the leading company realizes great economies of scale. There is room for several participants, and First Solar will be one of them.