Blockbuster status -- the gold medal term awarded to therapies racking up sales of more than $1 billion per year -- is the Holy Grail for drug developers. Arguably, it's the chance to discover blockbusters that fuels industry R&D spend and offsets the loss of billions spent working on drugs that end up on the cutting room floor.

However, knowing which drugs will become blockbusters isn't easy. Industry watchers often predict big bucks for compounds in development that fail to live up to expectations. So, instead of guessing which clinical drugs might end up becoming the next big winner, in this article series I look at recently approved drugs already notching big time sales that are on their way to blockbuster levels.

One of these promising drugs is prostate cancer drug Xtandi, co-developed and marketed by Medivation ( MDVN ) and Japanese drug maker Astellas ( ALPMY 0.85% ). Xtandi's rapid rise pushed Medivation's shares to all-time highs last year, and with key developments on the way, blockbuster status may be likely. 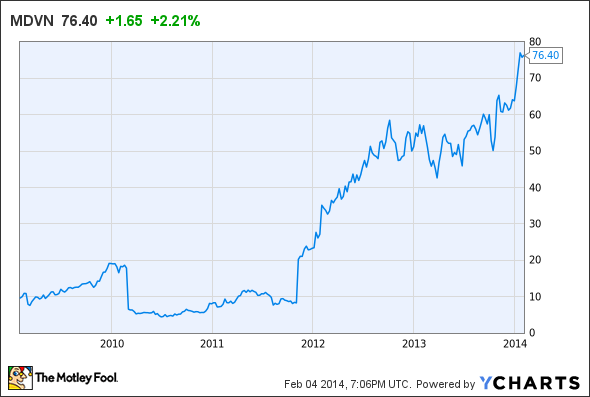 Addressing a big and growing need
Prostate cancer is one of the most common forms of cancer, affecting millions of men worldwide and resulting in billions in spending on treatment. There are roughly 192,000 new cases diagnosed annually, making prostate cancer the second most commonly diagnosed cancer afflicting American men. The cost to treat that ever growing patient pool is expected to surge from $12 billion a year in 2010 to as much as $19 billion by 2020.

Previously, the go-to treatment for advanced prostate cancer, or metastatic castration resistant prostate cancer, or mCRPC, was Sanofi's blockbuster taxotere. However, that drug lost patent exclusivity in 2010 creating a void that new treatments by Dendreon (NASDAQ: DNDN), with Provenge, and Johnson & Johnson ( JNJ 0.26% ), with Zytiga, have attempted to fill.

Despite last quarter's rapid sales pace, investors sold shares in Medivation following its fourth quarter earnings release. That release included guidance for a slowing of growth in the United States tied to Xtandi having mostly penetrated the market as a third line treatment.

However, while U.S. sales growth will decline in the coming couple quarters, Xtandi's global sales pace should quicken given Medivation and Astellas are rolling out Xtandi in European markets. The pace of sales in the U.S. should reexert heading into the end of the year if the FDA approves the drug as a second-line, pre-chemotherapy treatment.

Medivation and Astellas filed for that pre-chemo indication last week, and if the FDA gives the drug a green light, it will erase a competitive advantage held by Johnson's Zytiga since December 2012.

The combination of European launches and a potential approval in pre-chemo patients could prove big given that same scenario helped Johnson's Zytiga sales jump 77% last year. Since Xtandi arguably posted better results in pre-chemo studies than Zytiga, Johnson's success suggests Xtandi will reach a blockbuster run-rate this year too.

Fool-worthy final thoughts
Xtandi is Medivation's only currently approved product, which means the company's shares live or die by the drug's ability to win market share.That's a risky position for any biotechnology company given competitors are always working on new, better treatments.

Johnson, for example, spent $1 billion to acquire Aragon Pharmaceuticals last summer in a bid to get its hands on ARN-509, a potential Zytiga successor born out of the same research lab as Xtandi. However, Johnson could be years away from delivering ARN-509 to market, suggesting Xtandi has plenty of time to boost its market share in the meantime.