Dating back even before its years as an Altria Group (NYSE:MO) subsidiary, Philip Morris has been a reliable dividend stock. As the largest non-government tobacco company in the world, Philip Morris is well entrenched in its industry. It owns seven of the world's top 15 cigarette brands and commands a 28% global market share, excluding the U.S. and China.

Philip Morris is not just skating by; it is thriving. The company's strong brands, which include Marlboro and Parliament, enable it to raise prices to offset excise taxes. Even as excise taxes, marketing restrictions, and anti-smoking awareness put pressure on tobacco companies' bottom lines, Philip Morris' gross margin (including excise taxes) is roughly equal to what it was a decade ago. 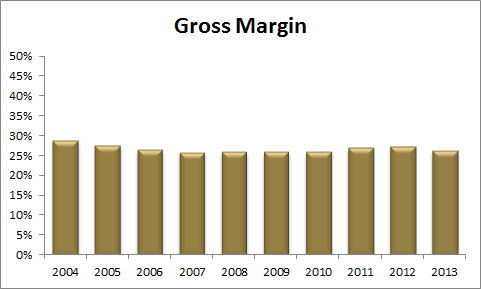 For a company that has such incredible staying power, it is a wonder why Philip Morris trades at less than 15 times 2014 adjusted earnings guidance. The market's pessimism likely centers around the company's European Union operations, where cigarette consumption is undergoing a sharp decline; 600 billion cigarettes were consumed in the European Union during 2010, 25% fewer than a decade prior. However, with significant growth opportunities in Asia, Philip Morris is in little danger of declining profitability. As a result, the company's growing dividend and prospects for capital appreciation make it an attractive buy for income investors.

Mattel is not playing around
Quick stats:

Like Philip Morris, Mattel is the market leader in a stable industry. The company's 16% share of the U.S. toy market is almost twice that of Hasbro (NASDAQ:HAS). Its brands include two of the best-known brands in the industry: Barbie and Fisher-Price. Given this backdrop, a 13 price-to-earnings ratio and a mid-single-digit yield seems like an obvious buy.

However, even though it sports some of the best-known toy brands in the U.S., the entire industry is losing out to video games and other forms of digital entertainment. Barbie sales in the U.S. have been cut in half since 2000, including a 12% decline in 2013 -- a stunning result for such a popular brand.

Fortunately, not all of Mattel's brands are experiencing declines. Sales of its popular American Girl dolls increased 11% in 2013. American Girl now accounts for 10% of companywide sales. Max Steel has also been an important growth contributor; introduced in 2001, a Latino version of Max Steel generated $100 million in sales in 2012 -- about 4% of Mattel's girls and boys brands international segment sales.

In addition, Mattel's $460 million purchase of Mega Brands gives it exposure to two of the fastest-growing toy categories; Mega is No. 2 in the construction building sets category and has a strong presence in the arts and crafts category. Mattel's international reach -- it derives 50% of its sales from outside the U.S. -- could propel Mega to greater heights in the years ahead.

However, the best reason to have high hopes for Mattel is the incredible product economics of the business. Research and development expenses run at less than 3% of sales; and while it is hard to know which new toys will be popular, those that turn out to be a hit are incredibly profitable. Despite pressure from declining Barbie sales, Mattel has actually increased its gross margin more than 6 percentage points -- to 53.6% -- over the past decade.

These incredible economics make it likely that Mattel will come out with new products in future years that will become significant contributors to the bottom line. As a result, income investors can count on a strong dividend and a high likelihood of market-beating capital gains.

Takeaway
Philip Morris International and Mattel are two companies that are different in all ways but this: Both offer solid dividends and a high likelihood of outsized capital gains. For income investors, it cannot get any better than that.