Intel, long considered to be a slow growth tech stock, could still have a few tricks up its sleeve. Here are three key ways Intel could surprisingly revolutionize the health care market.

When many people think of Intel (INTC -6.41%), the largest microprocessor company in the world, they think of a mature tech stock that has been stuck in neutral over the past decade. Intel has notably slumped since its Wintel heyday in the 1990s, missing a crucial leap to mobile processors -- a key market now dominated by chips licensed from ARM Holdings (ARMH).

However, Intel doesn't intend to quietly fade away, and it recently unleashed a new generation of tech that could revolutionize the health care industry within the next decade. Let's take a look at three of its most promising product lines.

3-D cameras for 3-D printing
Intel unveiled a new line of technology, branded RealSense, at CES 2014 in January. The centerpiece was the RealSense 3-D camera, which takes photos in three dimensions and captures distance and depth with the image data. This is a huge step up from the majority of current generation 3-D cameras, which produce a stereoscopic image from combined angles for a simulated 3-D effect.

The RealSense 3-D camera can be used to scan objects, making it possible to produce instant templates for 3-D printers. Intel has already inked a deal with 3-D printing company 3D Systems (DDD 6.22%) to convert its RealSense 3-D images into printable templates.

Intel's tiny Edison chips could be a game-changer for wearables
Intel also unveiled a tiny SD card-sized computer known as Edison at CES. Edison is a full-featured computer, powered by a 22nm dual core 400MHz Intel Quark processor, and is equipped with integrated Wi-Fi, Bluetooth, and other features. Intel demonstrated that Edison can be placed anywhere -- in chairs, appliances, and even coffee cups.

Intel demonstrated the possibilities of Edison with Rest Devices' Mimo Baby Monitor, which consists of a water-resistant turtle that attaches to a baby-sized "Kimono." Intel's Edison is installed inside the turtle, which takes temperature, breathing, and motion readings from the Kimono's sensors. Edison then delivers the data wirelessly to the parents' Google Android or Apple iOS devices, and can simultaneously activate other Edison-enabled devices across the network, such as a bottle warmer.

In the future, an adult version of the Mimo Baby Monitor could be used to monitor patients in hospitals or track the health of elderly patients at home. Edison could also be installed in a wide array of smart medical devices, such as pacemakers, glucose monitors, smart watches, and fitness bands -- meaning that a person in the near future could have multiple processors all over their body synchronizing to each other and the cloud. 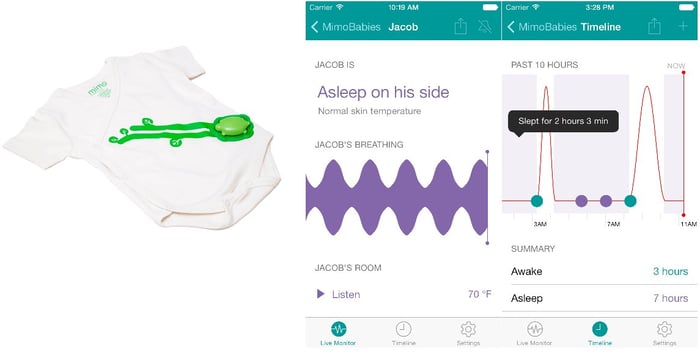 For Intel, Edison represents a way to leapfrog over ARM Holdings, which dominates mobile devices through licensing agreements with tech giants like Apple and Samsung. More importantly, Edison is Intel's way of showing critics that its aging x86 architecture, which some claim is less power efficient than ARM's chips, remains relevant in the age of wearable tech and the Internet of Things.

Providing raw horsepower for genome sequencing
In the big x86 vs. ARM debate, a common argument is that ARM chips might have dominated mobile devices, but they will never have the adequate horsepower to power high-end servers. ARM has responded to this criticism by rolling out higher-end chip designs, with a target of being installed in 10% of the server chip design market by 2017.

Therefore, Intel remains the top choice for higher-end server needs in health care IT and products like genome sequencers, which require massive horsepower. Illumina (ILMN 0.59%), for example, recently broke the "human genome sequencing sound barrier" by introducing a machine that can sequence the human genome for $1,000 -- a steep drop from the cost of $250,000 a mere decade ago. The machine, known as the HiSeq Ten X, consists of 10 machines for a total cost of $10 million. The HiSeq Ten X's Instrument Control Computer is powered by two high-end 2.7 GHz Intel Xeon 64-bit E5 processors.

NextBio, a private company that provides a knowledge-sharing platform for drug companies and life science researchers, also uses Intel's Xeon E5 processors to power its massive, constantly growing database of information. More powerful genome sequencing and data systems, like the ones from Illumina and NextBio, could lead to breakthroughs in locating new biomarkers and drug targets.

When we combine Moore's Law, which states that the number of transistors on integrated circuits will double every two years, with the fact that high-end Intel processors power most of these high-end health care machines, we can see that future medical breakthroughs might be highly dependent on Intel's processing power.

The Foolish takeaway
In closing, it's easy to dismiss Intel as a has-been stock being dragged down by a slowdown in global PC shipments. However, Intel also has incredibly deep pockets ($20.2 billion in cash and equivalents, compared to ARM Holdings' $955 million and AMD's  $1.1 billion) and a very lucrative pipeline of products that could revolutionize the health care market over the next few decades.

3 Dow Stocks That Are Screaming Buys in April