Aerospace major Boeing (NYSE:BA) derives its revenue from several divisions, of which the commercial airplanes segment happens to be the lead contributor. The commercial wing's share in the total revenue has been growing steadily, particularly in the last couple of years. It accounted for more than 61% of Boeing's revenue in 2013, and is expected to be a major growth driver in the coming years. Here are four reasons that support this belief:

Boeing's recent launches such as the 777X and a bigger model of 787 Dreamliner, the 787-10, claim to be more fuel efficient and come at competitive rates. Boeing's lead supplier of commercial engine GE Aviation, a segment of General Electric (NYSE:GE), has been putting in a lot on R&D to offer advanced engines that could reduce fuel consumption by 15%.

Demand for these jets is rising as fuel cost, which accounts for a third of the total operating expense of an airline, is surging. While this will increase Boeing's backlog, GE Aviation will be a beneficiary, too. The company may get more orders for commercial engines and services, bolstering revenue.

Rising global traffic is another factor that is pushing airlines to place orders with leading aircraft makers -- Boeing, which makes around 40% of global aircraft deliveries, is obviously one of the first choices.

Boeing had a mammoth commercial backlog of 5,070 aircraft by January end this year. European peer Airbus (OTC:EADSY), too, received huge orders in the past year that increased its backlog to a record high of 5,559 aircraft. Boeing's total contractual backlog in 2013 aggregated to a record of $422.7 billion of which more than 88%, or $373 billion, was for commercial airplanes. 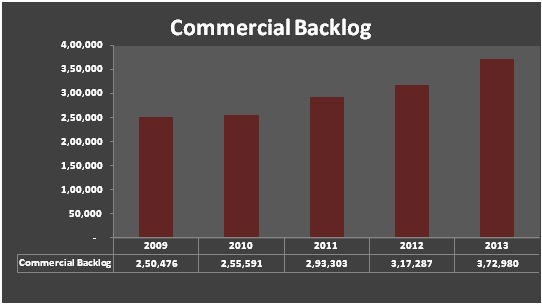 Demand from emerging economies
Boeing expects Asia-Pacific, primarily India and China, to be a massive market for its commercial jetliners. In the next 20 years, 36% of global commercial aircraft deliveries, approximately 12,800, would be made in this region. Asia Pacific is anticipated to grow at the rate of 4.5%, driven by 6.3% increased airplane traffic. In comparison, the world economy is estimated to gain 3.5% led by a 5% rise in the airplane traffic. According to Boeing's findings, the rising traffic would lead to a threefold increase in fleets from 5,090 in 2012, to 14,750 in 2032.

Airbus is also expected to benefit from the growing market. But Boeing's global deliveries have been higher than Airbus' in the last two years, and if this continues, the former would benefit more than the French manufacturer from the expanding market. Last year, Boeing occupied 43% of the commercial market by recording deliveries of 648 aircraft, while Airbus was close behind with 626 deliveries.

Plans for higher production rate
Boeing plans to accelerate its production rate to serve the growing aviation demand and turnaround backlog deliveries at a faster rate. It's already improved the production rate of the narrow body 737, the wide body 777, and the 787 Dreamliner.

Boeing increased the top selling 737 production rate from 35 to 38 airplanes a month in the first quarter of 2013, and plans to ramp up production to 42 a month in the second quarter of 2014. The company aims to increase this further to 47 aircraft a month by 2017. For the 787 model, Boeing expects to achieve a production rate of 10 a month from 2014, up from seven aircraft a month achieved in May 2013. This would boost the company's top and bottom line.

CEO Jim McNerney recently said that the company aims to widen profit margins further by making more commercial jetliners. Not only will the overhead cost get divided with more aircraft, but Boeing's average price per component will also fall owing to its volume-based contracts with suppliers. Moreover, it's entangled in a price war with Airbus and is desperate to reduce cost.

As a measure, the company has initiated a "Partnering for Success" program that aims to collaborate with suppliers. The company seeks to buy components at higher discounted rates from its part vendors. Presently, suppliers gain 15% to 20% from part selling, but Boeing wants them to squeeze it and get the price edge. As of now, only one third of its suppliers are part of this initiative. Once the remaining suppliers get involved, the company could enjoy substantial cost advantages.

Foolish conclusion
McNerney feels Boeing has "the biggest volume opportunity in the aerospace business over the next 10 or 15 years". The uptrend in the commercial aviation sector with encouraging demand for fuel efficient aircraft from emerging nations should nourish the company's growth. Higher production rate coupled with cost reduction initiatives should ensure success amid rising price competition. Overall, Boeing's long-term prospects look intact.