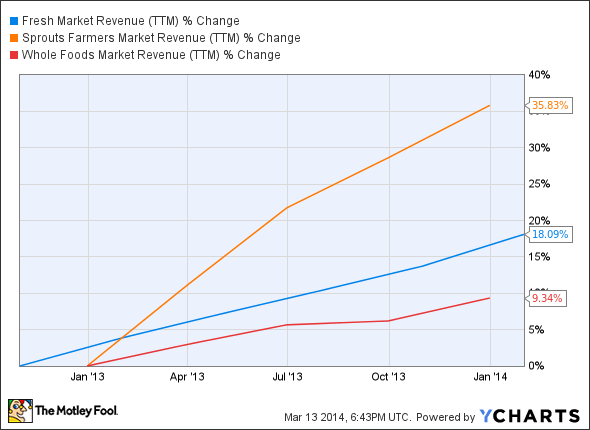 However, not all of these companies are performing well on the bottom line. Of these three companies, one offers fiscal dominance and stability, another offers a high-risk/high-reward opportunity, and the third, while offering some positives, lags behind its peers.

Not fresh enough
The Fresh Market is the one that is lagging its peers. However, there are many positives for the company.

For instance, fourth-quarter net sales jumped 15.1% year over year to $425.8 million. Comps improved 3.1%, impressive given the challenging consumer environment and severe winter weather. This was possible primarily thanks to promotions, which helped drive fourth-quarter average transaction size up 1.6% and transaction volume up 1.5%. On the other hand, when you have promotions, you often have a hit to margins and the bottom line. 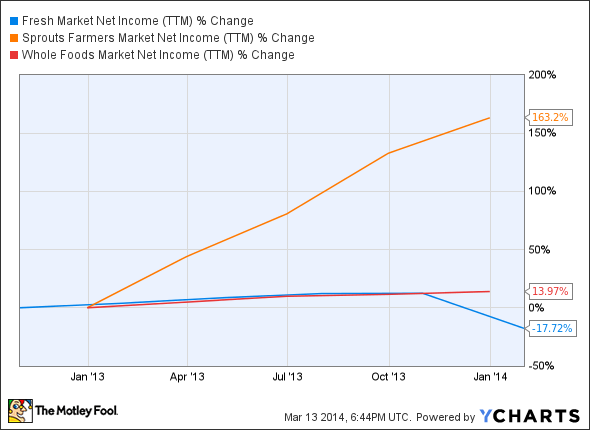 The majority of the pain began last October. Fortunately, The Fresh Market struck quickly to alleviate the problem: It has already closed four underperforming locations. It has also deployed a new analytics and forecasting method to better help predict sales at future locations. The Fresh Market has learned that it should be more aggressive east of the Mississippi River.

The Fresh Market still plans on opening a record number of stores this year (23 to 25), with the majority of the earnings-per-share growth related to these openings to be seen in the second half of the year. For fiscal year 2014, The Fresh Market expects to deliver diluted earnings per share of $1.30-$1.43 and comps of 1.5%-3.5%.

The Fresh Market believes that its fresh food, customer service, and warm and inviting atmosphere will help drive growth. While that's possible, and even likely, that's the same thing that Whole Foods Market and Sprouts Farmers Market offer. The former possesses more fiscal strength, however, and the latter offers more differentiation by selling natural and organic food for discounted prices.

While cash flows for The Fresh Market and Sprouts Farmers Market are strong enough to help support growth and manage debt, they won't have as much maneuverability as Whole Foods Market. This pertains to reinvesting capital into its business as well as returning capital to shareholders. For example, Whole Foods Market currently offers a dividend yield of 0.90%. Not terrific, but better than nothing, especially for a company that's still growing.

Sprouts Farmers Market is the fastest-growing of the three. It delivered a 27% year-over-year sales increase in its fourth quarter to $608.2 million. Comps improved a whopping 13.8%, indicating tremendous loyalty.

The Foolish takeaway
If you're looking for fiscal dominance in the organic and natural food grocery store space, which should lead to more growth opportunities and capital returns to shareholders, then you might want to consider Whole Foods Market.

As far as The Fresh Market, it's only trading at 36 times earnings, and it's growing on the top line and making moves to improve its bottom line. It doesn't offer more fiscal stability than Whole Foods Market or more growth potential than Sprouts Farmers Market, though.