Two media stocks square off in a battle of dividend fundamentals.

But few of us can invest in every single dividend-paying stock on the market, and even if we could, we're likely to find better gains by being selective. Today, two of America's (and the world's) most powerful media companies will square off in a head-to-head battle to determine which offers a better dividend for your portfolio.

Tale of the tape
Founded in 1923, The Walt Disney Company ( DIS -0.67% ) is the world's largest media conglomerate, with assets in film, television, publishing, and theme parks. The company has been a component of the Dow Jones Industrial Average since 1991, and is currently the only media representative on the landmark index. Headquartered in Burbank, California, Disney is perhaps best known for the Walt Disney Studios, which remains one of the world's largest film studios. The company also operates ABC Television Group, which includes the ABC television network itself and a portfolio of cable networks such as ABC Family, the Disney Channel, A+E Networks, and ESPN. Disney also owns and operates five world-class vacation destinations, with 11 theme parks and 44 resorts, across North America, Europe, and Asia.

Established in 1985 with the merger of Time Inc. and Warner Communications, Time Warner Inc ( TWX ) is a global leader in media and entertainment, with a similar operations profile as Disney spanning television networks, filmed entertainment productions, and publishing. Headquartered in New York City, the company operates pay-TV channels such as HBO and Cinemax, and it also owns a portfolio of cable TV networks including CNN, TBS, and TNT through its subsidiary Turner Broadcasting. Subsidiary Time is the publisher of major consumer titles such as People, Time, and Fortune in the magazine space. In the last decade, Time Warner spun off former acquirer AOL, Time Warner Cable, and Warner Music Group to increase shareholder value.

Round two: stability (dividend-raising streak)
Disney kept its annual dividend payouts firm through the global financial crisis of 2008, which means that the House of Mouse has only been increasing its dividend since 2010. That gives Time Warner the easy win, as it's been increasing its quarterly shareholder distributions every year since 2005. 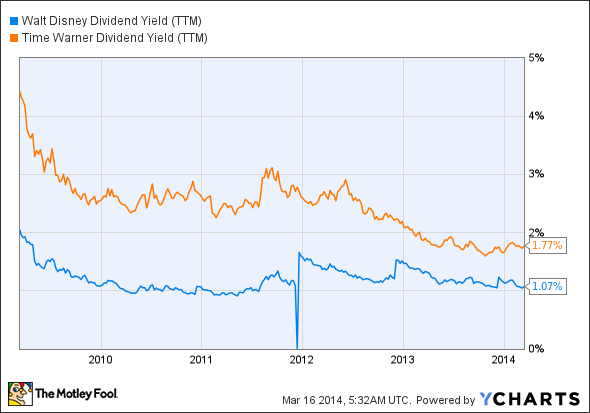 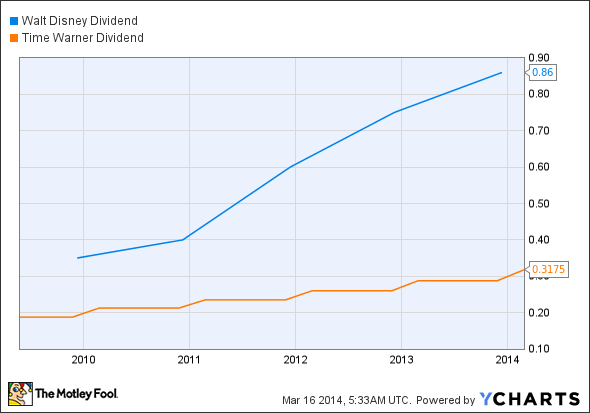 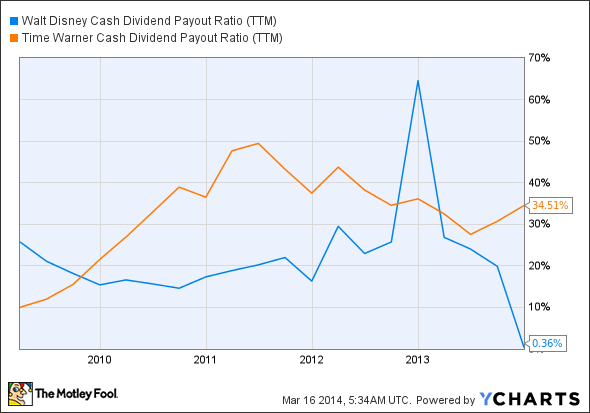 Bonus round: opportunities and threats
Disney may have won the best-of-five on the basis of its history, but investors should never base their decisions on past performance alone. Tomorrow might bring a far different business environment, so it's important to also examine each company's potential, whether it happens to be nearly boundless or constrained too tightly for growth.

One dividend to rule them all
In this writer's humble opinion, it seems that Disney has a better shot at long-term outperformance, thanks to its ubiquitous brand recognition and a more diversified business model. The company is likely to wind up creating more film franchises with the launch of Marvel's new X-Men and Guardians of the Galaxy comics series. Orlando's recent airport expansion project should also help lure a large number of new visitors to the legendary Disney World theme park. The company's combined properties seem more defensible than Time Warner's, which is the key differentiator in long-term investing for this type of industry. You might disagree, and if so, you're encouraged to share your viewpoint in the comments below. No dividend is completely perfect, but some are bound to produce better results than others. Keep your eyes open -- you never know where you might find the next great dividend stock!