Comcast spent more money lobbying in 2013 than every publicly traded company but one. Here's a look at how much the company spent and why it should factor into your investment thesis.

It's Sunshine Week 2014! For those unfamiliar with it, Sunshine Week aims to raise awareness and bring about more disclosure surrounding the U.S. government. Given that this is an investing site, our focus here is on publicly traded companies and the money they spend lobbying Washington. All of the data in this article comes from opensecrets.org and the Senate Lobbying Disclosure Act database .

Today, we're looking at Comcast (CMCSA -0.91%) . The media giant was one of the top five lobbying spenders out of all publicly traded companies in 2013. Of the $3.21 billion spent on lobbying last year, $18.8 million of it came from Comcast. In fact, only Northrop Grumman spent more than Comcast did.

Certainly, $18.8 million is a massive amount of cash to spend on advocacy, but how does it compare to Comcast's lobbying record over time? If it's a one-time occurrence, maybe we can dismiss the 2013 figure as an aberration. 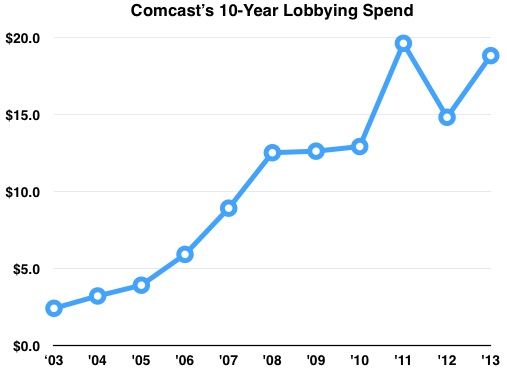 Part of this tremendous growth story can be explained by pointing out that Comcast itself has grown significantly over the last decade, its enterprise value up close to 100% in that chart. As a business grows, there are probably an increasing number of relevant issues to advocate for. Obviously, Comcast sees value in lobbying Washington, but how does its spending compare to its peer group? If it's in line, then maybe there is no need to worry about the nearly $19 million it spent last year.

Let's look at Comcast alongside peers DIRECTV, Dish Network, Time Warner, and Cablevision. Note that Time Warner, Inc. and Time Warner Cable are combined here. If we pooled the lobbying expenditures for these four companies, here is how it would break down on a percentage basis: 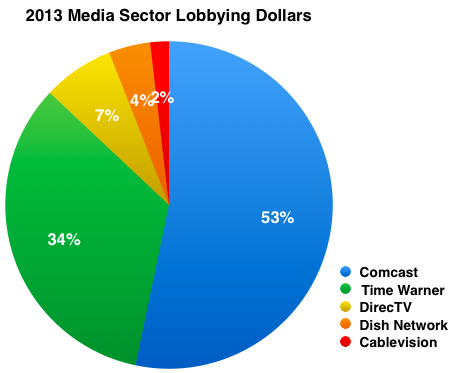 Note that Comcast still spends more for lobbying than the rest of its listed peers combined. Their business models are not entirely comparable, of course, but, regardless, one has to wonder what exactly Comcast is spending so much money on.

Here's a look at the company's 2013 lobbying record, broken out by the number of filed reports by specific issue code: 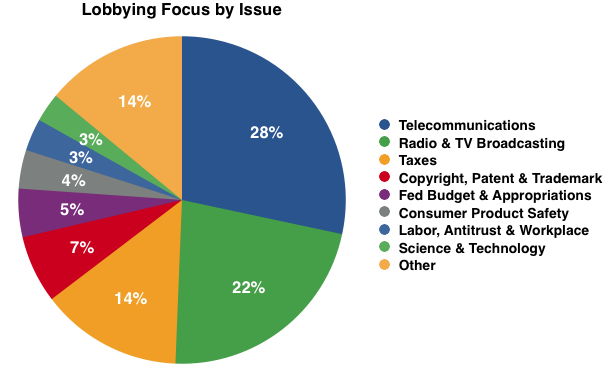 Labor, antitrust, and workplace! What are you doing here? It probably has nothing to do with Comcast's desire to swallow each and every one of its competitors. And why isn't your slice of the pie bigger? Maybe next year. Cynicism aside, even a cursory glance at these issues can help an investor brand-new to the stock to pick up what the company is and where it's headed. For the record, a deeper dig turns up three specific issues Comcast lobbied for concerning labor, antitrust, and workplace: "bonus depreciation issues," "oversight of antitrust issues", and "congressional oversight of Federal Trade Commission and Department of Justice concerning media antitrust issues." Interested investors can read more about the specifics of Comcast's other lobby issues here.

Why all of this matters to you
Now that we've flushed out Comcast's lobbying profile, it's fair to ask what it all means. Does lobbying really matter to investors? Does it even impact shareholder returns?

Academic studies and theoretical indexes both point to the superior performance of companies that lobby compared to companies that don't or to the S&P 500 index as a whole.

An academic paper out of the University of Mississippi published last summer concludes that there is a direct link between lobbying activity and shareholder wealth, with the authors writing, "Our results suggest that stocks of lobbying firms significantly outperform non-lobbying firms."

Further evidence of the success that lobbying brings comes from the investment research firm Strategas, which created an index that tracks the 50 companies that spend the most money on lobbying each year. It claims its index has beaten the S&P 500 for the last 15 straight years, implying the market is not properly valuing lobbying expenditures.

Aimee Duffy has no position in any stocks mentioned. The Motley Fool recommends DIRECTV. The Motley Fool owns shares of Northrop Grumman. We Fools may not all hold the same opinions, but we all believe that considering a diverse range of insights makes us better investors. The Motley Fool has a disclosure policy.