As much as I hate to say it, the economic recovery won't just go on forever. At some point, the growth will slow down. However, if one analyst is correct, the next few years of growth, as well as the inevitable recession to follow, could combine to produce tremendously favorable conditions for the banking sector to profit. If he's right, now is the time to get in!

Bove's predictions for the coming years

According to well-known bank analyst Dick Bove of Rafferty Capital, now is the time to get into bank stocks for several reasons. First, the sector has been and will continue to benefit as the economy continues to improve, and all signs point to pretty strong economic growth for at least the next couple of years.

What Bove said is that banks are currently operating at about 65% of their "capacity", or potential, and that current economic growth projections should result in this figure climbing to between 85% and 90%. Bove believes this will push bank valuations to 2.25 to 2.5 times book value, which is substantially above where the big banks trade now.

That's all well and good, but what about once growth begins to slow? Well, because of this growth and the inflation it is unlikely to cause, interest rates should begin to climb in the coming years, and Bove sees them climbing up to a 10-year Treasury yield of 8% -- a huge rise from the current yield of 2.7%. He predicts this will happen by 2017, culminating with the beginning of the next recession by 2018.

What it could mean for the banks
In the short term (next few years), it would mean higher valuations as banks are putting more of their resources to work and asset quality improves. Beyond that, higher rates would mean that interest rate spreads (how banks make their money on loans) would widen and profits could surge. This sounds great, but let's add some actual numbers into the mix and see what we could expect from the "big four".

If bank productivity increases, as Bove predicted, it could mean significant gains in bank stock prices. For example, using the low-end of Bove's price/book range (2.25), it would mean target prices of about $66 for Wells Fargo (NYSE:WFC), $118 for JPMorgan Chase (NYSE:JPM), and $46 for Bank of America (NYSE:BAC), which would represent gains of 39%, 109%, and 175% respectively. 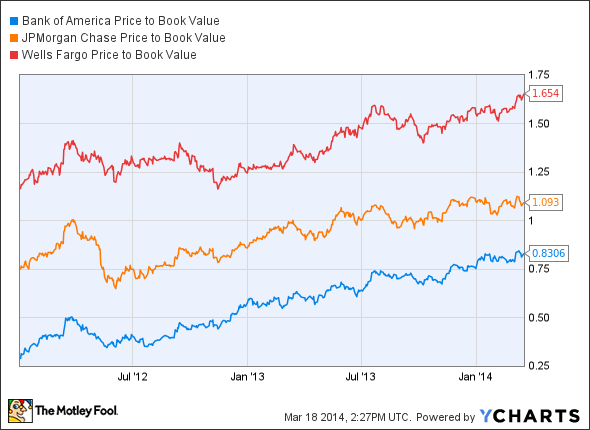 As far as the prediction of an interest rate spike is concerned, it's a little trickier to put some numbers into the equation, but let's give it a shot. The 10-year Treasury rate and the 30-year mortgage rate follow each other pretty closely, with a consistent gap of around 1.5% between the two. So, if Bove's prediction of an 8% Treasury yield comes true, it would mean a 30-year mortgage rate of around 9.5%. 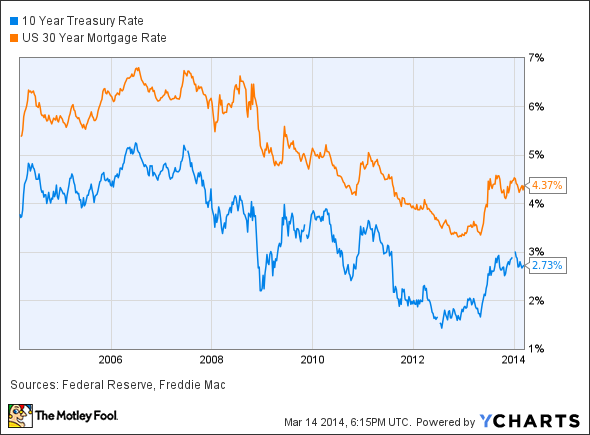 Well, the last time mortgage rates were that high was 1991, and at that time savings accounts averaged about 5% interest (including CD's and money market accounts), meaning that the bank's "spread" was around 4.5%. Spreads were around 4% during 2013, which is basically the average mortgage rate since savings accounts pay virtually no interest right now.  In other words, banks should be making about 20% more profit on new loans.

History doesn't lie
If Bove is correct, and the 10-year Treasury rate rises toward 8%, the price/book figures he suggests may be pretty accurate. In 2000 the 10-year rate peaked close to 7%, and this meant price/book ratios of above 2.5 for both Wells and JPMorgan, and about 1.9 for Bank of America.