Based on a weighted average of 85 different indicators, the Chicago Fed Index provides an overall picture of our nation's economy. An above-zero reading denotes economic expansion, while a negative number implies contraction.

After clocking in at a revised -0.45 for cold and stormy January, February's report puts business activity back in growth territory at 0.14. Analysts had expected a slightly more subdued 0.10 reading. From a longer-term perspective, however, the index's three-month moving average fell 0.2 points to -0.18. 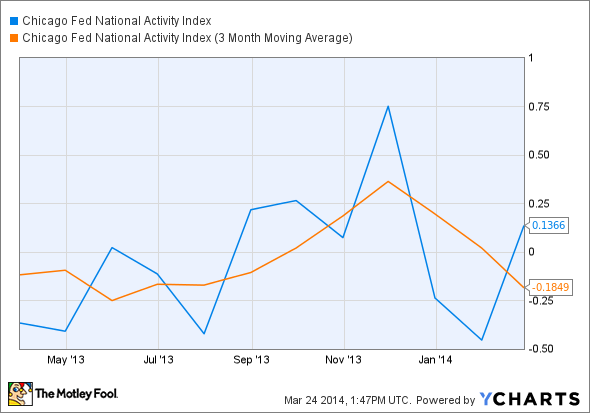 While three of the index's four broader categories made gains for February, production provided the main push behind the improvement. Production-related indicators added on 0.26 to the overall index, compared to a 0.38 subtraction the month before. Manufacturing made up most of its lost ground, expanding 0.8% after a 0.9% decline in January.

Employment pulled a slight 0.02 off the index after adding 0.11 the previous month, while housing knocked off 0.16 after subtracting 0.19 in January.