When Avatar was released in late 2009 it put both 3-D and IMAX (NYSE:IMAX) on the map. The movie grossed a whopping $2.8 billion worldwide and proved that large-format screens could attract consumers and that 3-D was a viable option.

But 3-D and IMAX were far from mature businesses back then. RealD (NYSE: RLD) and IMAX were both huge beneficiaries of Avatar's success, as you can see in the 2011 spike in revenue below, but you can also see that the increase in revenue didn't last long. 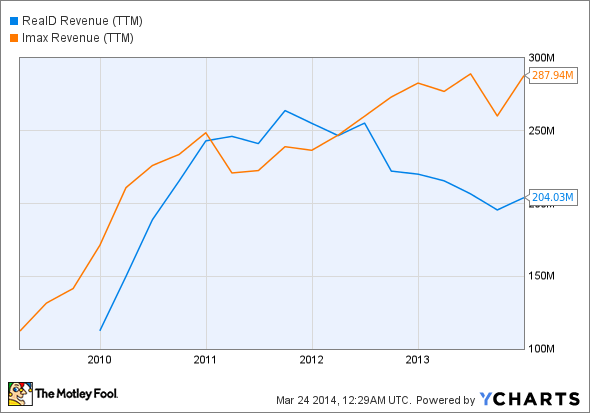 What's scary about the chart above is that RealD and IMAX both expanded their footprints rapidly between the end of 2010 and today. At the end of 2010, RealD had 15,000 theaters and has grown to 24,800 today. IMAX had 634 theaters at that time and now has 837 theaters. Yet RealD's revenue is down since then and IMAX's revenue is only up slightly.

Over the last four years, IMAX has learned a lot about what works in its distribution model.

What we've learned about 3-D and IMAX
After the massive success of Avatar, it seemed that every movie was released in 3-D with the thinking that people would pay the premium for almost anything. But neither 3-D or IMAX worked with every film, something the companies and studios are still getting used to.

Disney (NYSE:DIS) is probably the best example of learning the value of IMAX. Action films like Iron Man and Captain America work well on IMAX or in 3-D, but kids films like Cars 2 didn't have the same success. That's why IMAX's 2013 lineup was almost entirely action films compared to the year or two after Avatar, which included many non-action films.

The recent agreement between IMAX and Disney shows the shift toward action and includes three Marvel movies and Star Wars: Episode VII in the next two years.

As IMAX's network grows and studios learn how to use it, the company's revenue should grow as well. A Chinese studio recently launched the first Chinese-only IMAX film, so new markets are adopting IMAX as well.

The power of Avatar is back
Let's also not forget that James Cameron is reportedly shooting three Avatar sequels for release in 2016, 2017, and 2018. The original Avatar grossed $228 million at just 262 IMAX theaters, and the network potential has more than tripled since then to 837 theaters. By the time Avatar 2 is released, the network could be nearly 1,500 theaters and grossing $500 million or more isn't out of the question for each film.

Foolish bottom line
IMAX isn't a steal at 21 times forward earnings estimates, but it's the biggest and best box-office experience out there, and that's what consumers are looking for if they're going to venture out to a movie these days. The potential from the growing theater network and blockbusters like Star Wars and Avatar give it lots of growth potential ahead, which is why I think IMAX is a buy right now.