Kroger (NYSE:KR) recently reported an excellent fourth quarter and full fiscal 2013, though the news was perhaps lost in the shuffle over the merger between Safeway (NYSE: SWY) and Albertsons. Kroger has also been on a bit of an acquisition spree recently, lending some weight to rumors it may make a competing bid for Safeway.

Meanwhile, competitors such as Wal-Mart (NYSE:WMT) are expanding their own stores to compete more on Kroger's turf. With the competitive landscape changing, what should investors do about the nation's largest supermarket chain by revenue?

Turn and face the grocer

Kroger posted a healthy 3.6% comparable-store sales growth for the year; despite very slight margin compression, this allowed the company to grow adjusted earnings per share by 13%. Normally I shy away from using "adjusted" comparisons, as they can easily be the source of earnings shenanigans, but in Kroger's case, it makes sense to use last year's adjusted EPS. First, fiscal 2012 was a 53-week year, while 2013 had only 52 weeks, so comparing the two is already tricky. In addition, 2012 benefited from a $0.14-per-share legal settlement. The two combined accounted for 9% of Kroger's unadjusted 2012 EPS, a fact that the company disclosed at the time.

While it's tempting to compare Kroger's sales and earnings growth to that of its competitors, it's hard to actually find comparable competitors. By virtue of its many grocery brands, including Ralphs and Harris Teeter, Kroger is often compared to other midrange grocery heavyweights such as Safeway and SUPERVALU. But Kroger also operates a wide variety of other stores, ranging from multidepartment stores to convenience stores and even jewelry shops.

Unfortunately, the company reports all its operating results under one segment, claiming that these different formats somehow have similar economic characteristics and financial performance. I find it hard to believe that Kroger's jewelry stores have similar operations to its convenience stores, but that sort of aggregation makes Kroger more comparable to other multidepartment big-box retailers such as Wal-Mart and Target (NYSE:TGT).

While Kroger has managed to increase sales at about the same rate as Wal-Mart and Target, its operating margin is lower and less stable, even given Target's recent fall from grace. 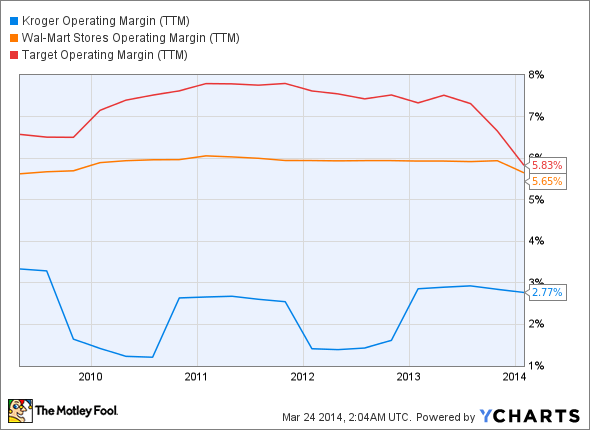 Ch-ch-changes
Kroger's margin may be ready to improve, though. In January, the company acquired the Harris Teeter chain of grocery stores, and in February it took over digital coupon system YOU Tech. The Harris Teeter acquisition gives Kroger more of an edge against Whole Foods,  whose operating margin is three times higher than that of traditional grocers. Harris Teeter isn't quite on the level of Whole Foods, but the chain's 227 stores tend to be found in affluent neighborhoods and offer more fresh food, giving it a higher profit margin than traditional rivals .

Meanwhile, YOU Tech should bring technological advantages. YOU Tech provides digital coupon solutions for retailers, such as Kroger's own app for Android and iPhones, which allows customers to get weekly ads and track reward programs without having to cut coupons or carry around another membership card. The acquisition should provide Kroger with a lot of delicious data to mine for customer preferences. Kroger plans to keep the platform open and continue to offer solutions for other retailers. Even if privacy concerns prevent it from mining coupon data from competitors, it will at least have greater control over its own data, and it will benefit from the growing trend toward digital couponing over paper coupons.

Finally, even if Kroger doesn't make a bid for Safeway, it's still likely to pick up a few of the competing chain's locations. Bloomberg reported that Kroger has already contacted Cerberus Capital Management about buying any Safeway stores the private equity firm doesn't acquire. It may score quite a few if the Federal Trade Commission decides that Cerberus needs to split off some of Safeway's assets to pass antitrust regulations.

The Foolish takeaway
Kroger isn't the most exciting retailer out there, and I'd certainly feel better if the company offered more details regarding its operations. Its margins are lower than other large-format competitors, but without more detail it's hard to say for sure where the problem lies.

That said, Kroger has been increasing sales year after year, and its recent acquisitions may help position it for better growth going forward. The company's low enterprise value-to-EBITDA ratio also makes it attractive, although it shouldn't be taken as a given that Kroger is undervalued. At an EV/EBITDA of around 7, Kroger is trading at the same valuation as Safeway's lowball buyout.