Gold is known as investors' favorite inflation hedge. While the precious metal has its merits, the majority of gold has no productive use. Potash, on the other hand, is a key part of industrial agricultural production. The recent gold crash shows just how unstable gold can be. Now is the time to look beyond gold miners to find alternative inflation hedges.

Prices since the U.S. left the gold standard 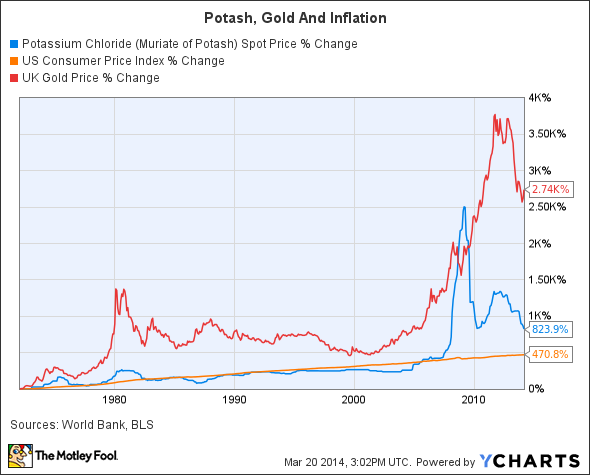 The above chart shows the change in gold, potash, and the consumer price index since 1972, just after President Richard Nixon took the U.S. off the gold standard. Within this time frame, both gold and potash have increased more than inflation; but gold increased more than potash.

Price increases after the 70's stagflation 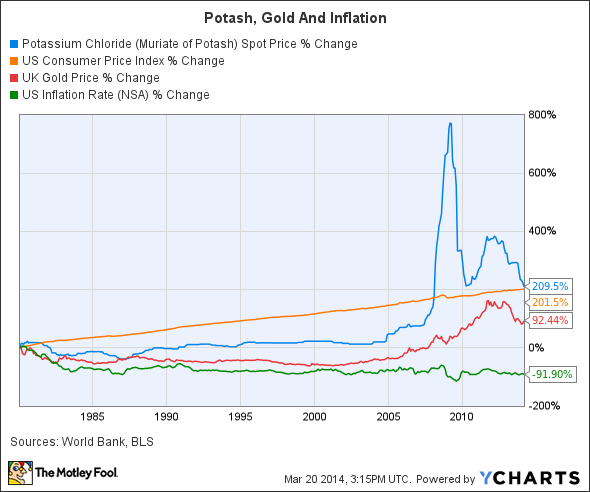 Now if you take a look at price increases from the 80s onward, a different picture emerges. While the rate of inflation falls and remains low, potash actually outperforms gold.

The bottom line: In times of falling and low inflation consider potash
Gold is not automatically a great inflation hedge. Even with the Fed's recent quantitative easing, the rate of inflation has remained low and gold has not performed as well as many would have liked.

By buying potash in 70s or 80s, you could have beat inflation without exposing yourself to the losses that 80s gold buyers faced.

Possible investments
It's not practical to buy a warehouse full of potash, so investing in a potash producer is a better idea. There is a limited number of potash miners in the world, and the majority have interests in closely related markets.

PotashCorp (NYSE:POT) is a big potash miner with interests in the potash, nitrogen, and phosphate markets. The company was hit hard by recent instability in the potash market. Its potash gross margin fell from $281 million in the fourth quarter of 2012 to $228 million in Q4 2013. The upside is that the market's price floor appears to have been reestablished at around $300 per ton.

Now that the market is stabilizing, PotashCorp's future is more secure. The downside is that its dividend is not expected to move in a positive direction for some time. PotashCorp's payout ratio is already 58%, leaving it little space to raise its dividend without hurting capital expenditures.

Mosaic recently decided to double down in the phosphate market, spending $1.4 billion to buy up CF Industries' phosphate operations. While its CF purchase will help its market share, Mosaic's margins will probably remain depressed as competition continues in the phosphate and potash markets.

Agrium (NYSE: AGU) is a different sort of player. It has a big focus on the retail markets along with its own production of fertilizers like potash. This strategy has worked out great, letting Agrium limit the impact of wholesale's losses. Before accounting for a small number of deductions, it ended 2013 with its retail segment accounting for 45.7% of its adjusted earnings before interest, taxes, depreciation, and amortization and wholesale accounting for 59.6% of its adjusted EBITDA.

Now that the wholesale markets are starting to calm down, Agrium is in a very good position. Its retail operations stabilize its profits, while its wholesale operations raise its overall margins.

The other key part of a good inflation hedge
One thing to remember when considering an equity investment as an inflation hedge is the importance of fixed debt. Fixed debt payments do not increase with inflation, while inflation raises all other prices including profits. This means that in real terms, debtors with fixed debt enjoy a shrinking debt load.

You can construct a portfolio with two levels of hedging by investing in companies with substantial, but not excessive, fixed debt loads. PotashCorp and Agrium shine in this area, as they both have billions in fixed-rate bonds. All other things held constant, Agrium is in a slightly better position to take advantage of inflation; its total debt-to-equity ratio of approximately 0.6 is higher than PotashCorp's total debt-to-equity ratio of 0.4.

Think differently
In popular conception gold and the SPDR Gold Trust are the primordial inflation hedge; but in low inflation or falling inflation environments, fertilizers like potash are strong alternatives. It is a good time to consider investing with lower potash and phosphate prices already priced into fertilizer companies' valuations. Investing in PotashCorp or Agrium gives you even more upside, as you benefit from inflation's ability to decrease their debt loads.