Solazyme (NASDAQ:TVIA) and FutureFuel (NYSE:FF) are two relatively small companies largely focused on the emerging bio-fuel market. However, they aren't the only players in the space. And some of the other companies, like DuPont (NYSE:DD), operate on a scale that Solazyme and FutureFuel can only dream about.

The small fry
Solazyme uses microalgae to produce oil from plant based sugars, like sugarcane and corn. It's a fascinating technology that uses "indirect photosynthesis" to create marketable products. The company has some important partners, including the U.S. Navy, which uses fuel Solazyme creates in its ships.

FutureFuel makes specialty chemicals and bio-diesel. It can produce nearly 60 million gallons of fuel a year. The company's process utilizes feedstocks such as soybeans, beef tallow, and pork lard. Unlike Solazyme, FutureFuel is a profitable company. That, however, has much to do with its specialty chemical business. In fact, in the company's annual report it notes that uncertainty, "...remains as to whether or not we will produce biodiesel in the future." And that's not in the Risks section, it's in the Business Description!

Part of the problem at both FutureFuel and Solazyme is size—the market cap of both is around the billion dollar mark. While they aren't mom and pop, they aren't huge, either. They simply don't have the staying power that larger companies may offer.

Big boppers
That's where companies like $60 billion market cap DuPont come in. The company's Industrial Biosciences unit is working on a plant in Iowa that will be capable of producing 30 million gallons of fuel a year, according to DuPont global public affairs leader Wendy Rosen. The plant should be done by the end of the year and will use corn stover as a feedstock. Corn stover is essentially what's left of a corn plant after the corn has been harvested.

Twenty eight billion dollar market cap Archer Daniels Midland (NYSE:ADM) is another biofuel player with huge scale. Interestingly, the agricultural giant works with Solazyme, providing that small fry with a big-name backer. However, Archer Daniels Midland's biofuel business goes well beyond this one partnership. The company produces both bio-diesel and ethanol. It's position in the agricultural industry is a big help in procuring feedstocks and in integrating its fuel making businesses into the broader ag industry.

Playing in private
Of course there are private players in the space, too, like POET-DSM Advanced Biofuels. This is a, "cooperative effort" between POET, "...one of the world's largest ethanol producers, with a 25-year history..." and Royal DSM, "a global science-based company..." The duo is building a demonstration plant in Iowa with the, "...goal of globally licensing..." its technology.

Steve Hartig, general manager of licensing at Poet-DSM, explains, "Basically, the plant will be mechanically complete at about the end of [Q1 2014], and we'll be starting up in second quarter." Abengoa Bioenergy is another company that looks set to start production at a biofuel plant early this year. 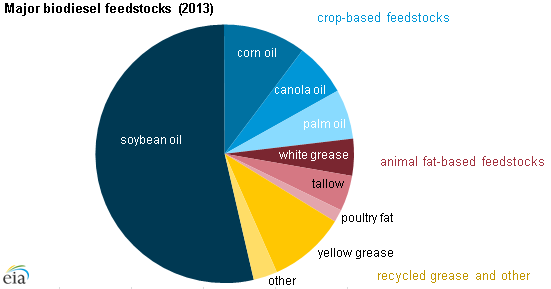 Is the tide turning?
With so many companies, including giants like DuPont and Archer Daniels Midland, playing in the biofuels space, it looks like there's real investment potential. And there are a number of big projects coming on this year that could prove to be important milestones in the industry. However, the sector isn't for the feint of heart. FutureFuel's warning that it might pull out of the bio-diesel market should be seen as a blinking red light that this is still a new and largely immature industry.

That said, the U.S. Energy Information Administration clearly points to the potential: "From 2002 to 2013, biomass energy converted to biofuels grew more than 500% as U.S. production of ethanol and biodiesel grew." That kind of growth is hard to ignore, but you may want to be careful how you get involved. The diversified businesses of DuPont and Archer Daniels Midland may be a better option for conservative investors, while aggressive types may like the excitement of smaller Solazyme and FutureFuel.

Bio-Fuel isn't the only big change in the U.S. energy patch...