Investors will soon learn whether Exelixis (NASDAQ:EXEL) will be able to expand the use of its Cometriq cancer drug beyond its current indication as a therapy for medullary thyroid cancer, or MTC.

Exelixis completed enrollment of patients in a phase 3 study of Cometriq in metastatic castration resistant prostate cancer, or mCRPC, in September, and the trials completion date was scheduled for March.

That means data should be coming soon showing whether Cometriq was as successful in the larger late stage study as it was in phase 2. If results come in as the company hopes, it will clear the way for Exelixis to file for a supplemental approval in mCRPC this year. That would pit Cometriq up against Johnson & Johnson (NYSE:JNJ), Medivation (NASDAQ:MDVN), and Bayer (OTC:BAYR.Y) in 2015. 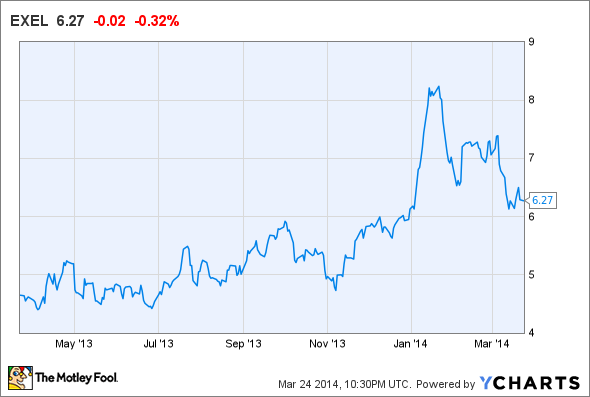 Starting out small
The FDA gave Cometriq the go-ahead as a therapy for MTC in 2012 and the EU's Committee for Medicinal Products for Human Use, or CHMP, offered a positive opinion on the drug for MTC in December.

However, those approvals aren't likely to produce big sales for Cometriq. MTC is a rare disease that accounts for just 4% of the 56,000 Americans diagnosed with thyroid cancer each year. Of those diagnosed with MTC, only patients who can't be treated surgically, or who have seen the cancer metastasize, are eligible for Cometriq.

Further diminishing the market opportunity in MTC is that Cometriq has to battle for share against AstraZeneca's (NASDAQ:AZN) Caprelsa, which won approval for MTC in 2011. So far, neither Cometriq nor Caprelsa are setting any revenue records. Cometriq sales are tracking at around $5 million a quarter, and Caprelsa's sales were just $30 million in 2012.

Expanding across multiple indications
Exelixis Cometriq overall opportunity; however, is much larger than MTC. The company has a slew of ongoing trials studying it in prostate cancer, liver, and kidney cancer. That broad potential is thanks to Cometriq targeting multiple receptors implicated in tumor growth, including RET, MET and VEGFR2. By blocking those receptors, Cometriq may slow or halt a variety of cancer, many of which are far more common than MTC.

For example, success in the soon-to-be reported prostate cancer trial would significantly increase Exelixis' patient population, given that there are roughly 233,000 new cases of prostate cancer diagnosed in the U.S. each year. Roughly one in every seven men will be diagnosed with the disease at some point in their lifetime.

The size of that patient pool has attracted a slate of recent therapies, including Johnson & Johnson's Zytiga and Medivation's Xtandi. Zytiga's global sales topped $1.7 billion in 2013; and Xtandi is on track to reach a billion dollar annualized run rate later this year -- assuming  FDA grants it approval in pre-chemotherapy patients.

In addition to Johnson's Zytiga, and Medivation's Xtandi, Bayer has also recently entered the market. The FDA approved Bayer's Xofigo in December, and Bayer is so confident in Xofigo, it spent nearly $3 billion acquiring Algeta, its partner on the drug, in January.

All three of those compounds are vying for a share of the market previously held by go-to prostate cancer therapy, taxotere, which was sold by Sanofi as Taxol. Before losing patent protection, Taxol was generating $3 billion a year in sales.

Despite a plate full of competitors, patients and doctors still need new treatments. An estimated 29,000 people die from prostate cancer each year, and given the average age of diagnosis is 66 -- and more baby boomers are reaching that age every day -- the demand for new therapies is only getting bigger.

Fool-worthy final thoughts
Investors should be watching over the next few weeks for those phase 3 results. If the results are solid, look for Exelixis to offer guidance on a timeline for its sNDA, including a potential FDA decision date.

Exelixis would certainly welcome the chance to get the FDA's green-light given its burning through cash. Exelixis spent nearly $50 million on research and development during the fourth quarter. That pace of spending has Exelixis' guiding for its cash stock pile to fall from $400 million to around $200 million by year end. An approval could go a long way to helping shareholders avoid another dilutive share offering -- the company raised $75 million more in secondary in January.

Despite the prostate cancer market getting crowded by new therapies from Johnson, Medivation, and Bayer, there's still plenty of opportunity. The National Cancer Institute estimates spending on prostate cancer will climb from less than $12 billion in 2010 to as much as $19 billion by 2020. However, one important question remains, will Cometriq's data be good enough for it to win its fair share of that market?