With so many new reports out there on an almost daily basis, it's difficult to decipher what's really going on in the retail space when it comes to brick and mortar versus e-commerce.

What most investors already know is that while e-commerce is growing at a rapid rate, it's still nowhere near as large as the brick-and-mortar space -- from a sales perspective. Therefore, e-commerce companies are likely to attract growth investors while primarily brick-and-mortar companies are likely to attract dividend investors. The key is figuring the best options.

Of course, you already know what's the best option for e-commerce, which is Amazon (NASDAQ:AMZN). There are some positive and negatives for Amazon if you were to invest in the company right now, but the long-term picture is crystal clear. In regard to brick-and-mortar retailers, determining the real long-term winners isn't as obvious.

Morphing malls
There were approximately 1,100 malls across the United States 10 years ago. Since that time, 400 of those malls have been repurposed or closed. Quiznos and Sbarro are two of the most recent victims, both filing for bankruptcy.

Then there's Sears Holdings (NASDAQ:SHLDQ) and J.C. Penney (OTC:JCPN.Q), both of which have suffered significant revenue and net income declines over the past five years: 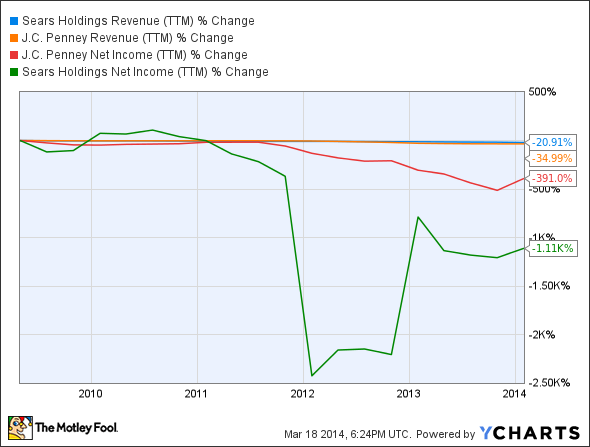 If foot traffic at the malls is down and the consumers that these stores target don't have as much disposable income as in the past, then it's a simple conclusion. Fortunately, malls might morph into entertainment arenas, which could lead to increased traffic in the future, but there would still likely be fewer locations.

A lot of investors are hopping on the J.C. Penney bandwagon recently. While it's possible the company navigates a successful turnaround, and I hope that happens, it's important to keep in mind that current results are still being compared to the Ron Johnson era.

At least J.C. Penney should have a better chance at a turnaround than Sears. Unlike J.C. Penney, many consumers and investors see Sears as having given up, which stems from the appearance of its physical stores.

If these two retailers continue to suffer, then it will increase market share for Macy's (NYSE:M). And in addition to winning in the brick-and-mortar department-store space, it's also highly focused on omnichannel integration -- making it easy for customers to shop when, how, and where they want via in-store, online, or mobile means.

Notice the considerable difference for Macy's on the top and bottom lines over the past five years compared to J.C. Penney and Sears: 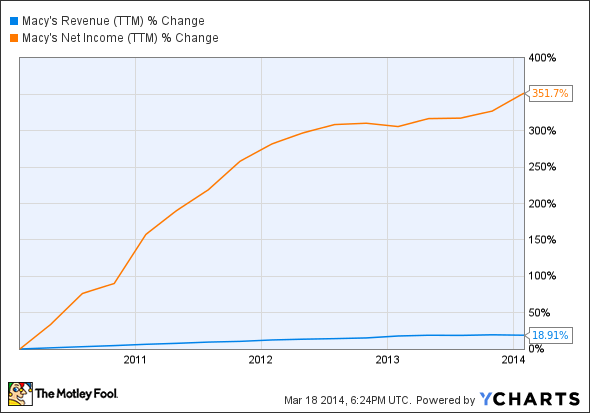 Macy's doesn't fall into the brick-and-mortar or e-commerce space. Rather, it fits into both. If you're considering and investment in strictly e-commerce, then let's take a look at Amazon.

Swimming downstream
There are two potential drawbacks to investing in Amazon. One is that the stock is expensive. At the moment, it's trading at 618 times earnings. The other potential drawback is that it flirts with profitability without making a serious commitment. In regard to the latter, increasing the annual Amazon Prime membership by $20 per year should help.

While Wal-Mart (NYSE:WMT) is still the largest retailer in the world, if Amazon continues at this pace, then it will one day steal the reigns from today's retailing giant. Considering e-commerce only represented 6% of retail sales in the fourth quarter of 2013, this would be like investing in Wal-Mart prior to its massive geographical expansion.

The Foolish takeaway
If you're looking for safe dividends, then you might want to consider Wal-Mart, which currently offers a dividend yield of 2.6%. Macy's offers growth in brick and mortar as well as e-commerce while also offering a decent 1.7% dividend yield.

As far as Amazon goes, it continues to grow its top line, and the increase in Amazon Prime membership cost should aid the bottom line. Therefore, the only real negative is valuation, making it high risk. But if you ignore valuation and focus on the underlying business, Amazon has enormous long-term potential.

In regard to Sears and J.C. Penney, they're both facing significant headwinds. Please do your own research prior to making any investment decisions.