While "Divergent" easily won the weekend and has a sequel on the way, "Muppets Most Wanted" just couldn't live up to its name. 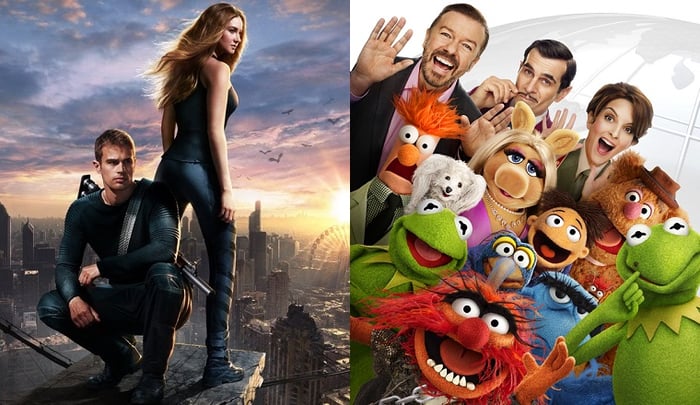 Divergent easily won the top spot at this weekend's box office, collecting a massive $56 million from domestic audiences. At first glance, however, that may seem disappointing as it's well below both Lions Gate's $85 million budget and the $70 million earned by the first Twilight film more than five years ago.

So why are shares of Lions Gate up more than 2% so far today?

First, Divergent's impressive Thursday evening sales alone proved more than enough for Lions Gate to greenlight the second movie in the trilogy. We don't have a specific timeline yet, but it'll be titled Insurgent.

And why not? The namesake novels from author Veronica Roth only got more popular with each release. The third book, titled Allegiant, even outsold the final Hunger Games by a five-to-one margin on Amazon.com in the month leading up to its release. When it finally was released on Oct. 22, Allegiant set a new first-day record for HarperCollins by selling an amazing 455,000 copies.

Next, despite generally unfavorable reviews from critics, polled audiences granted Lions Gate's Divergent movie a coveted "A" CinemaScore. That's not just die-hard Divergent fans speaking, either, so the film should enjoy universally positive word of mouth going forward. All things considered, don't be surprised if Divergent makes a global run at $350 million by the time it exits theaters -- not a huge number by any means, but a strong start to a promising franchise.

Muppets Most (un)Wanted
Divergent also more than tripled the $16.5 million debut earned by Disney's ( DIS 0.29% ) Muppets Most Wanted, which itself required a $50 million production budget and fell far short of early expectations in the $25 million range.

For perspective, 2011's The Muppets cost $5 million less to create, and opened to a solid $29.2 million en route to a $165.2 million global cume. If Muppets Most Wanted follows a similar trajectory over the next few months, it could struggle to break $95 million worldwide.

To its credit, Muppets Most Wanted did seem to put a dent in the momentum of DreamWorks Animation's ( DWA ) reigning box office champion, Mr. Peabody & Sherman. The animated flick fell a larger-than-expected 46.4% to $11.7 million for third place in its third week. Mr. Peabody & Sherman also gleaned roughly the same amount overseas, bringing the global total of DreamWorks' latest $145 million effort to $183.2 million.

This might seem discouraging since the original 300 had already earned nearly $162 million domestically by this point in 2007, but keep in mind Time Warner's $110 million sequel/prequel (side-quel?) is still strikingly popular overseas. Rise of an Empire simultaneously added another $21 million internationally this weekend, bringing its worldwide gross to $289.2 million. Not too shabby for a movie many quickly dubbed a failure even after its dominant start earlier this month.

Finally, Disney/Dreamworks Studios' tag team effort in Need for Speed continued to crash hard in the U.S., falling 56.4% from its disappointing debut last weekend to $7.8 million. Heck, even the 780-theater release of Freestyle's God's Not Dead managed to usurp the relatively new $66 million racing movie. Once again, though, international movie-goers came to the rescue by adding $29.2 million, making Need for Speed the world's second-highest grossing movie behind Divergent and bringing its worldwide total to $126.5 million.

In the end, this goes to show that while the U.S. box office is the world's largest, it isn't always the best indicator of a film's prospects.