Future installments
Cars 3 and The Incredibles 2 are both set to be released after 2015. In order to determine the potential for these two films, we must look at past results.

The sequel, Cars 2, didn't perform as well at the domestic box office, but it performed better than the original at the worldwide box office. This likely stemmed from the movie taking place overseas. This seemed to be a strategic move by Disney, but domestic moviegoers felt let down. Cars 2 had a production budget of $200 million. It grossed $191 million at the domestic box office and $560 million at the worldwide box office. Looking ahead, it will be interesting to see if Disney goes for the domestic or international moviegoer.

Star Wars news
Disney hasn't given much away, but there are some clues. These clues include that some very familiar faces will be in Star Wars: Episode VII and that there will be a trio of new young leads. The only character that we know is certainly returning is R2-D2.

We also know that JJ Abrams is the director, that John Williams is still the composer, and that Disney's open auditions called for a street smart orphan girl in her late teens as well as a smart and capable male in his late teens or early 20s. And according to The Hollywood Reporter, Adam Driver will play the villain.

Disney's approach of dropping small hints every once in a while is brilliant. In marketing, it has been proven that this is an effective approach, as it heightens consumer excitement.

Other reasons to consider Disney
In addition to the above potential growth catalysts, which should further improve brand recognition, Disney owns ABC, ESPN, and all Disney channels; it's a retailer; and it's a theme park operator. This diversification is what makes Disney so attractive to many investors. If one segment falters, another sector often picks up the slack. Below is a breakdown of revenue per segment for fiscal-year 2013:

Disney's future potential with Cars, The Incredibles, and Star Wars franchises can lead to revenue gains in each segment. In addition to aforementioned growth potential areas, these brands can be leveraged to the television market, implemented in theme parks, and be made into video games. Therefore, these brands go well beyond the box office.

Of course, Star Wars: Episode VII should be a massive success. The movie wouldn't even have to impress moviegoers to sell tickets. The brand is that strong. And in addition to future installments for the Cars and The Incredibles franchises, Frozen will have a sequel and a show on Broadway, and Shanghai Disney Resort is set to open on Dec. 31, 2015. Shanghai is a wealthy and highly populated city with more than 14 million people -- a very good combination for Disney. 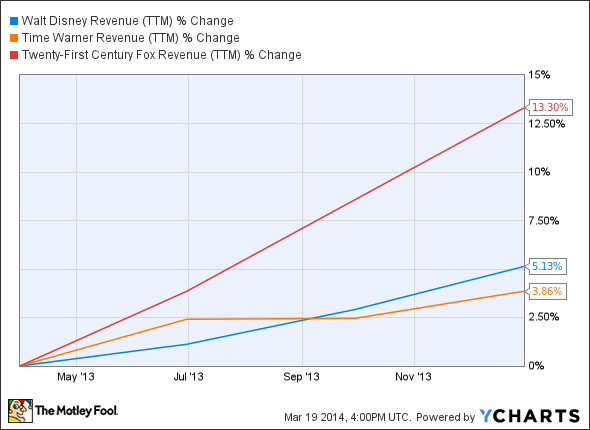 Twenty-First Century Fox did deliver a 15% increase in revenue in the second quarter, primarily thanks to the inclusion of Sky Deutschland revenue and a 14% boost in affiliate revenue growth in its Cable Networking Program segment.

In regards to filmed entertainment and future brand potential, The Secret Life of Walter Mitty and Walking with Dinosaurs don't compare to what Disney has to offer.

Furthermore, while Twenty-First Century Fox is impressive, it doesn't compare to Disney in merchandising potential. With all the aforementioned movie brands, Disney will have extraordinary merchandising opportunities, especially with Star Wars.

As far as Time Warner goes, it has been growing the slowest, but it does offer a 1.9% dividend yield, higher than Disney and Twenty-First Century Fox at 1.1% and 0.8%, respectively. This might entice dividend investors, but Disney is very capable of increasing capital returns to shareholders in the future.

Time Warner's fourth-quarter revenue improved 5% to $8.6 billion in the fourth quarter. TBS (cables #1 network in primetime among adults 18-49), TNT (#2 network in total day among adults 25-54), and HBO (most Primetime Emmy Awards of any network) all performed well. Warner Bros. delivered hits Gravity and Her.

Looking ahead, The Lego Movie may inspire a sequel, and 300: Rise of an Empire continues a successful brand. However, while everything is well at Time Warner, its brands can't be leveraged to the same extent that Disney can leverage its brands.

The Foolish takeaway
Disney has several potential future growth catalysts, partially in thanks to the ability to leverage some of these brands across all segments: added installments to Cars and The Incredibles, a sequel and Broadway show for Frozen, Star Wars: Episode VII, and Shanghai Disney Resort. While nothing is a guarantee, it would be difficult to find another company that is so fiscally sound and "mature" while also offering significant future growth potential. However, please do your own research prior to making any investment decisions.