According to the EIA, the availability of ethanol fueling stations has more than doubled over the last seven years, with areas outside the Midwest the fastest growers. 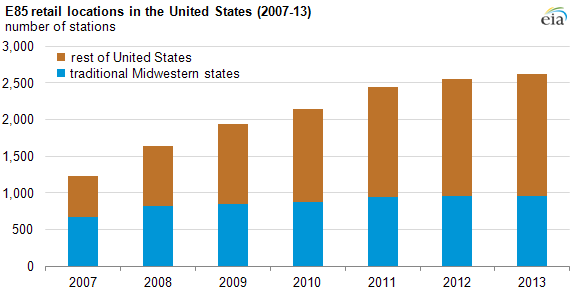 California and New York have seen some of the fastest growth in new E85 fueling stations, increasing from fewer than a dozen stations combined in 2007 to more than 80 stations each in 2013.

Currently, 2% of all retail stations in the United States offer E85, serving the approximately 5% of the U.S. light-duty vehicle fleet capable of running on E85, according to the report. This increased access could be the final piece of the puzzle in introducing E85 to the broader market.

So just how fast is ethanol consumption growing? In a separate report the EIA found that biomass energy consumption in the United States grew more than 60% from 2002 to 2013.

This growth is almost entirely due to ethanol but also a smaller amount of biodiesel and other biomass-based diesel fuels. So who stands to benefit from this increasing accessibility and demand?

Valero Energy Corporation (NYSE:VLO) is the first traditional refiner to enter the ethanol market with the purchase of 10 state of the art ethanol plants since 2010. On March 21, 2014 Valero announced that it has purchased an eleventh corn ethanol plant in Mount Vernon, Indiana, with an annual production capacity of 110 million gallons.

This purchase should come as no surprise to those watching the balance sheets. Ethanol operations accounted for $222 million in the first nine months of 2013 compared to an operating loss of $59 million for the first nine months of 2012. The $281 million increase was primarily due to a $315 million increase in gross margin (a $0.35 per gallon increase). This price increase was a result of ethanol storage levels reaching a three year low following producer cutbacks during the 2012 year when a poor corn harvest sent input prices higher.

But 2013 saw a better corn harvest dropping input prices. In yet another article, the EIA noted that producers should benefit from higher margins. From January 2012 through the last week of December 2013, the average price of corn delivered to Iowa ethanol plants was $6.61 per bushel ($236 per ton) -- significantly down from its short-term peak in summer of 2012 at over $300/ton. Margins for the production of ethanol have increased because of the sharp drop in corn prices after the 2013 harvest, combined with increased overseas demand. China appears to be leading the export demand, increasing its total imports in 2013 to 9.7 million tons. Compare that to 2008 when imports accounted for 4.5 million tons. That's over a 100% increase in just five years.

According to the company, a global population that will surpass 8 billion by 2030 is expected to consume 55% more energy than it used in 2005. but with petroleum reserves declining and greenhouse gas emissions from fossil fuels increasing, traditional approaches can't be the only answer to tomorrow's energy needs.

It should be noted that recently the correlation between ethanol inputs into gasoline and lower prices has recently come under fire. While the DoE, among others, maintains that ethanol inputs reduce the cost of gasoline, recent studies from MIT have called that into question. With 33% less energy than gasoline, but a cheaper price, it seems the jury is still out on this particular issue.

In the meantime Archer has been making huge gains in the ethanol and bio-diesel sectors. 2013 showed an operating profit of $454 million, almost double the 2012 amount of $241 million. Management highlighted ethanol as a key driver going forward in 2014.

So far we have gone over key aspects of why ethanol is important and why large companies are investing in this technology. However, for both companies discussed ethanol makes up a small fraction of overall operations. Perhaps there is a better way to capitalize on ethanol if you really believe in the future of this fuel?

Green Plains Renewable Energy (NASDAQ:GPRE) is a vertically integrated pure play in the ethanol industry. Over the last year the stock is up a whopping 168%, and the future is looking even better.

In the Q4 2013 report, President and CEO Todd Becker stated:

Margins for the ethanol industry expanded during the fourth quarter of 2013 and have remained strong in the near term. Ethanol and distillers grains prices reflect robust demand and tight supplies both domestically and internationally. As a result of these factors, as well as our recent acquisitions, we anticipate our first quarter 2014 results will be better than the fourth quarter of 2013. Finally, with our current hedging activities and visible margin structure, at this point we expect the first half of 2014 to be our strongest on record.

Bottom line
Ethanol is a growth industry and large players are making headway in this burgeoning sector. Investing in established companies with an eye on the ethanol market could be a safer investment than going for a pure play. But those who can tolerate a bit of risk might be happier with a Green Plains over an Archer Daniels Midland or Valero.