SolarCity stock has fallen significantly over the past month. Is the long thesis still on track?

SolarCity ( SCTY.DL ) stock has retraced significantly over the past month. Shares were on fire up until one month ago. So why did the stock fall, and has the bull case changed? 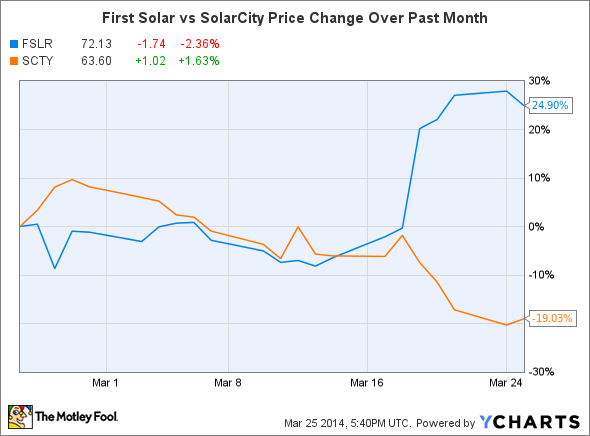 The second reason is that solar sector sentiment has weakened recently. Solar stocks are very susceptible to sentiment shifts because the majority of their present value is in their future potential. Because the future is not set in stone and subject to many opinions, the market's view of future potential can change dramatically and with it, solar stock prices.

The third reason is that many momentum investors left at the same time because sentiment weakened. Up until a month ago, Tesla ( TSLA -6.42% ) and SolarCity were all benefiting from a reflexive loop, where the higher their shares rose, the greater their chances of success; the greater the chances of success, the better the businesses looked fundamentally and the more their shares would rise. This type of market dynamic naturally attracted many short-term trend followers and momentum investors. Because sentiment weakened, many of those momentum investors left at once, causing the two stocks to correct.

The bottom line
Ultimately for long-term investors, I don't think the long thesis has changed.

SolarCity management has done a remarkable job in executing their plan of attaining one million customers by 2018. Over the past year, SolarCity grabbed significant market share from competitors. It also lowered costs beyond original forecasts. Because management executed superbly in the past, there is no reason to doubt management's future execution.

One can argue that SolarCity will be one of those few rooftop companies that compete against the grid in ten years. More than any other solar firm, SolarCity speaks Wall Street's language. With its 2018 one million customer goal, SolarCity wants to 'get big fast,' and management is using Wall Street to do so. SolarCity is on the leading edge in terms of getting financing from securitization; SolarCity is active in mergers and acquisitions; and it also uses secondary offerings. Wall Street banks have returned the favor by assigning the company a low cost of capital, which in turn allows SolarCity to gain market share. In my opinion, SolarCity is Wall Street's unofficial pick to win the rooftop sector.

There is no question that SolarCity is a risky bet -- it is a high-beta stock with significant short interest. Most of SolarCity's current value is in its future potential. But there is also no question that the company has a chance at being a disruptive force in the utility sector. With its close connection to Wall Street banks in addition to its access to Tesla R&D, SolarCity has significant competitive advantages. If SolarCity succeeds and disrupts the grid, its stock price could be many multiples of what it is currently.