It’s not as scary as you think.

No matter how you cut it, shares of 3D Systems ( DDD -6.37% ) are expensive on paper. While this may scare many investors into missing out on a great opportunity, Foolish investors aren't ones to automatically dismiss "overpriced" stocks from becoming the latest additions to their portfolios. After crunching the numbers, the longer an investor holds 3D Systems starting from today, the better the chances that they'll stand to make a profit over the long term.

On a high level, 3D Systems is the Amazon.com of 3-D printing, aggressively investing to improve its long-term business prospects. The company has been deploying heaps of cash to make acquisitions, grow market share, and improve its technology. Consequently, 3D Systems' bottom-line earnings power is likely to remain constrained for the foreseeable future. This is why it's better to evaluate 3D Systems by how much investors are willing to pay for its revenues. 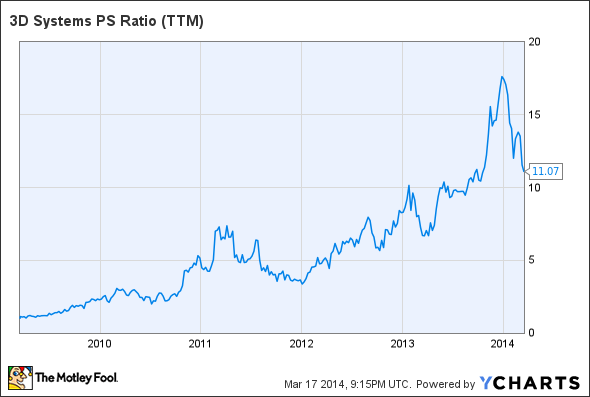 Getting realistic
You could easily argue that 3D Systems deserves to trade at a high premium to the market because 3-D printing offers tremendous disruptive potential to revolutionize how the world designs and manufacturers, and 3D Systems is a leading company in the space. However, investors should still expect that 3D Systems' price-to-sales multiple will eventually contract to a level more in line with companies or industries that have similar revenue growth trajectories and characteristics.

Over the last five years, Google has grown its revenues by nearly 18% per year, and over the next five, analysts expect revenues to grow by another 17% per year. Like 3D Systems, Google enjoys being a leader in its space and is often described as a disruptive company. Assuming 3D Systems can grow its revenues by a similar long-term growth rate, Google's current price-to-sales ratio of roughly 7 seems like an appropriate ballpark valuation estimate for 3D Systems. Of course, Google and 3D Systems are completely different businesses with different models and profit margins, but what unites these businesses is their ability to disrupt the status quo. Because the market often assigns premiums to industry disruptors, the likelihood exists that 3D Systems will continue to trade at some kind of premium to the market. 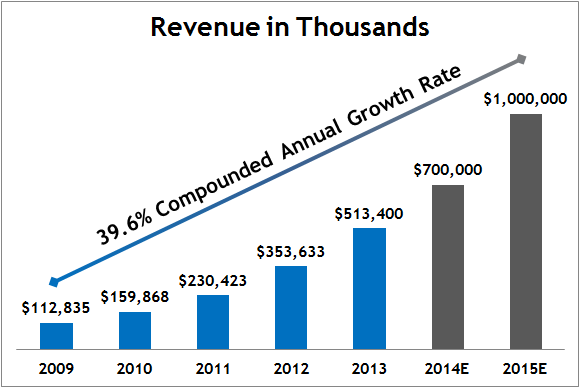 While this may seem like a conservative estimate based on 3D Systems' current revenue trajectory, the 3-D printing industry as a whole is expected to grow by about 19.3% a year through 2021, and analysts expect 3D Systems to grow its revenues by about 23% per year over the next five years. Additionally, 3D Systems has made nearly 50 acquisitions in the last three years to help drive stronger revenue growth. Investors should probably discount this historically strong revenue growth rate to some degree.

It quickly becomes apparent that the longer 3D Systems shares are held, the less 3D Systems has to grow its revenues to generate long-term returns for investors. Historically, 3D Systems' acquisition strategy has helped it generate incredibly strong revenue growth and the company's future revenue estimates suggest this will likely continue in the years ahead. In other words, it isn't entirely out of the question for 3D Systems's long-term return to be 10% to 15% or more per year over the next decade. The magic of compounding would turn today's $60 stock into a $155 or $240 one.

A friendly reminder
If 3D Systems price-to-sales ratio were to compress from 11 to four and revenues remained at 2013 levels, investors would lose 64% of their initial investment. Although 3D Systems’ current revenue trajectory makes this “doomsday” scenario seem highly unlikely, there are unfortunately no guarantees when it comes to investing. It’s crucial for investors to understand that if 3D Systems grows its revenues at a rate slower than a price-to-sales multiple compression over a specified period, investors will face losses. The severity of these losses will be determined by a combination of the rate of compression and 3D Systems’ corresponding (if any) annual revenue growth.

Buying shares of 3D Systems at today's levels is really a vote of confidence in the company's ability to significantly grow revenues over the long term, and that the risk you're taking is less than the potential reward. Regardless of how confident you are in 3D Systems' ability to drive future revenue growth, never buy more than you're comfortable losing if 3D Systems lost 100% of its value.

Pulling the trigger
If 3D Systems' acquisition strategy continues far into the future, it'll make it even easier for the company to drive long-term revenue growth fast enough to more than offset a major price-to-sales multiple contraction. The evidence already suggests that 3D Systems is making the right kinds of acquisitions, so there's currently little incentive for this strategy to change.

Of course, a big portion of 3D Systems' future returns are going to be dependent on what investors are willing to pay for its revenue growth -- and anything is possible when it comes to investor sentiment. Investors may grow tired of 3D Systems' acquisition strategy, but the backstop of strong industry growth builds a margin of safety into 3D Systems' revenue trajectory and gives investors more confidence to endure the ups and down for the long haul.

Naturally, Foolish investors won't let this "expensive stock" get in the way of what appears to be a great long-term opportunity.