Please ensure Javascript is enabled for purposes of website accessibility
Free Article Join Over 1 Million Premium Members And Get More In-Depth Stock Guidance and Research
By Patrick Morris - Mar 25, 2014 at 8:00AM

After the latest results from the stress test, when compared to Wells Fargo, JPMorgan Chase, and even Citigroup, Bank of America has real reason for concern.

The Federal Reserve released its results from the stress test last week and it turns out Bank of America ( BAC -2.46% ) -- and its shareholders -- should be stressed.

The results
At first glance, the stress test results for Bank of America, Wells Fargo ( WFC -2.81% ), Citigroup ( C -2.06% ), and JPMorgan Chase ( JPM -1.49% ) reveal the reality that under the "severely adverse scenario" as stipulated by the Federal Reserve -- which involved unemployment topping 11%, GDP falling by 6%, home prices dropping 26%, and stock markets being cut in half -- things turn dramatically downwards for all the major banks. In total, they have estimated losses of a staggering $150 billion over nine quarters.

Unsurprisingly, Wells Fargo comes out on top relative to the big four in every major category gauged in both the size of the drop seen from the initial standing to the stressed standing, and final result. It has higher capital and leverage ratios -- which measure its ability to insulate against risk -- and also has dramatically lower bottom-line losses: 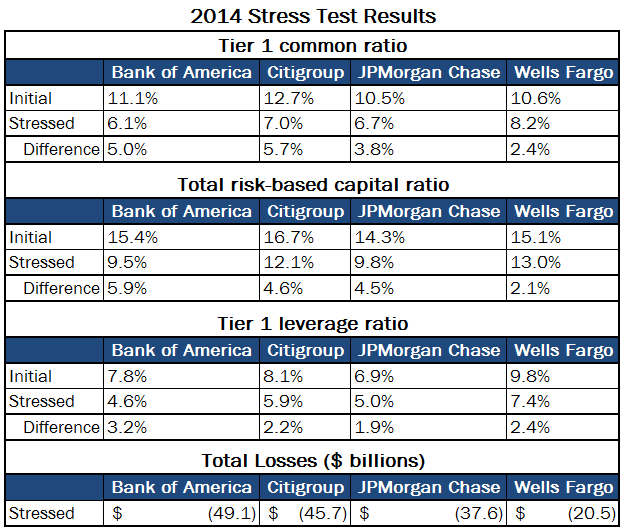 But of course, Wells Fargo has a fewer percent of its operations in the riskier investment banking and trading operations than the other three, so these results largely do not come as a surprise.

However, one thing that is surprising -- and a bit troubling -- is both the position of Bank of America relative to its peers, and also the wide disparity between its own projections and the Federal Reserve's.

The reason for concern
Bank of America has undoubtedly been improving in both 2012 and 2013, but at first glance of the results, the dramatic losses witnessed by Bank of America in the severely adverse scenario do raise concerns. Not only does it have the widest gap between its initial standing and standing under the severely stressed scenario of the four major metrics measured, but it also has the lowest results. This would indicate of the big four, it faces the most operational risk.

In addition, as shown in the chart below, there is also a wide disparity between where Bank of America projects it will stand after the nine quarters of stress versus what the Federal Reserve thinks:

It must be noted there are disparities between what all the banks project from internal results and what the Federal Reserve projects -- for example Wells Fargo notes it suspects its losses would be $2.4 billion versus $20.5 billion projected by the Fed -- yet the gaps seen by all of them certainly pose questions.

The major takeaway
As a result of Bank of America nearly tripling its income in 2013 to $11.4 billion from $4.2 billion in 2012, many have concluded the ship has been fully righted and the firm is navigating on the journey to complete correction from the depths of its woes seen during the financial crisis.

The banks are positioned better now versus where they once stood, and it's incredibly likely Bank of America will continue to evolve and its shareholders will be rewarded. However, these results serve as a stark picture to remind investors there is indeed a risk posed by it and the other biggest banks.