Sometimes, strong earnings aren't enough to help push a company's share price higher. Investors have a tendency to focus on both current earnings and management's expectations for the future. Nike (NYSE:NKE), the largest shoe company in the world, found out about this harsh reality the hard way.

In spite of reporting revenue and earnings that exceeded analyst estimates, the company's shares fell more than 3% in after-hours trading because the company provided a lukewarm signal that its growth might slow down moving forward. Given all of this information, does this look like an opportune time to buy into the company at a discount or would this present too much risk for the Foolish investor?

Nike smashed the forecasts
For the quarter, Nike reported revenue of $6.97 billion. This represents a nearly 13% increase from the year-ago quarter and it exceeded the $6.69 billion that analysts expected. In its release, management attributed the rise in revenue, for the most part, to attractive growth in its North America segment as well as its Western Europe segment. In aggregate, these regions saw revenue rise 15%.

In terms of profits, Nike did even better. For the quarter, the business saw its earnings per share come in at $0.76. This represents a 4% gain from the $0.73 the company reported in the year-ago quarter and it came in $0.04 above the forecast.

Although higher sales helped the company's bottom line, it saw a negative effect from a 16% increase in the company's selling, general and administrative expenses. Demand creation expense (i.e. advertising and promotion expenses), which jumped 18%, made the largest contribution to the company's soaring costs. According to the company, some part of its rising costs stemmed from its preparation for the World Cup.

On the downside, management announced that worldwide futures orders, which represent orders placed by customers which the company expects to fill in the near future, rose only 12%. While this points toward an attractive growth rate for a $70 billion company, it left investors with a sour taste in their mouths. 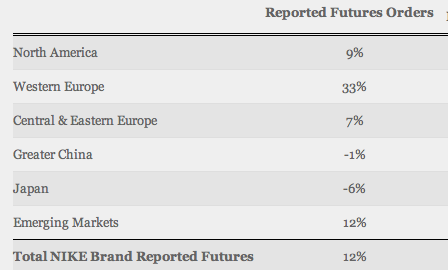 How does Nike fare in comparison with Deckers Outdoor?
Based solely on its performance, investors might think that Nike's strong growth and respectable rise in earnings per share would warrant a soaring share price, but how does the company stack up against its peers? Although it is smaller in terms of both revenue and market cap, investors should keep an eye on Deckers Outdoor Corporation (NYSE:DECK).

In its most recent quarter, Deckers Outdoor saw its revenue rise an impressive 19% from $617.3 million to $736 million. The largest contribution to this increase came from the company's UGG brand, which enjoyed an 18% rise in sales. The far-smaller Sanuk brand saw its revenue rise a jaw-dropping 45%.

Looking at profits, the picture appears even sweeter. For the quarter, the company saw its earnings per share rise 46% to $4.04 from the $2.77 management reported in the year-ago quarter. In addition to benefiting from rising sales and a 1% reduction in share count, Deckers Outdoor saw its cost of goods sold fall from 53.7% of sales to 48.9%. Lower sheepskin costs served as the primary driver behind this decrease in combination with the company's use of UGGpure, a cheaper alternative to its table-grade sheepskin.

Foolish takeaway
Based on the data provided, it looks pretty clear-cut that Nike had a strong quarter but the future outlook of the company has investors slightly concerned. In the long run, Nike's large market position and economic moat will likely convert into strong returns for shareholders. However, for those who are interested in a company with higher growth prospects, Deckers Outdoor may have nice prospects. On top of generating growth that has outpaced Nike, the company's rise in profits lately has been impressive.