Charts and graphs can be very useful. They're a great tool for making sense of trends in both the long and short term, and for sorting out one-off events from the bigger picture. But they can also lie better than any other medium if you're looking at the wrong data. Mark Twain would have a lot of fun with today's financial charts, if only to rip them apart with a twinkle in his eye.

Take a look at this EBITDA margins chart, for example, and tell me what you see: 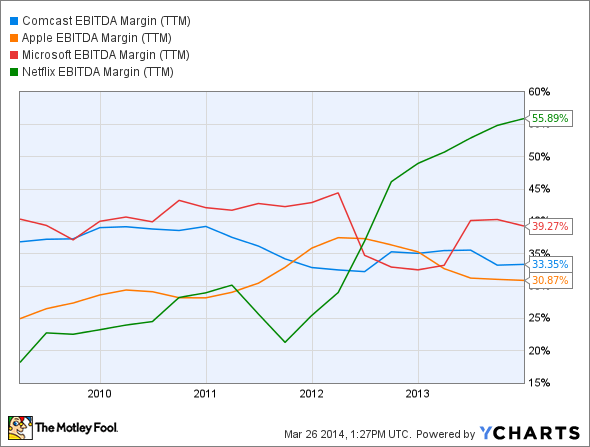 These are some of the most profitable businesses on the market today. Microsoft (NASDAQ:MSFT) collects copious amounts of cash from a high-margin software focus with very low capital requirements. It makes perfect sense that Microsoft's EBITDA margins run high.

Apple (NASDAQ:AAPL) is riding a decade of fantastic success where it established itself as a seller of high-end, or even luxury, products. The age of smartphones has been very kind to Apple's EBITDA profits.

Likewise, Comcast (NASDAQ:CMCSA) loves to charge very high prices for its cable TV and Internet services. With very little competition in most of its local markets, consumers often have no choice but to pay up. Alongside the rest of the cable industry, Comcast is raising its subscription prices at more than twice the pace of inflation. Again, this is great for the company's EBITDA profits.

These are strong businesses with very healthy profits, including exceptional EBITDA margins. And yet, Netflix (NASDAQ:NFLX) is crushing all of them right now -- and still climbing higher.

That flies in the face of Netflix's razor-thin net profits and negative free cash flows. 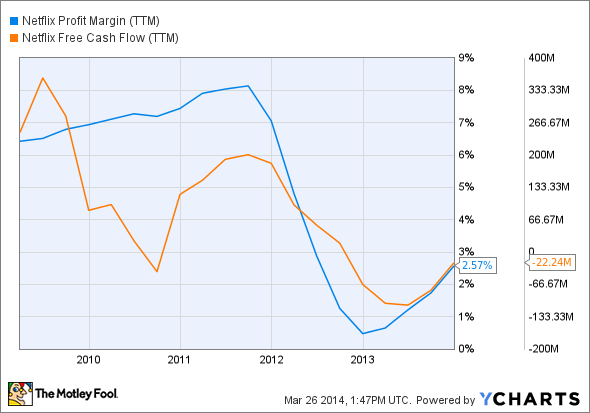 And that's a clear signal to take a closer look at the numbers. How is it possible that Netflix is showing market-trouncing EBITDA profits even as other profitability markers are pointing way down?

As always, the answer comes back to Netflix's massive content costs.

Netflix moves its streaming content expenses onto the income statement and balance sheet by way of amortizing a cash flow item. It's an accounting treatment that spreads the taxable impact of content costs over the usable life of the licenses, which often is several years.

These items are not included in EBITDA calculations, which is why Netflix's EBITDA margin chart looks so incredibly... impossible.

There are many reasons to love Netflix's stock, especially now that share prices have dropped more than 17% in just a couple of weeks. I do believe that the company's domestic growth has several years of healthy improvements left in it, and that the international growth strategy will pay huge dividends in the long term. The high costs of rolling out a global service are holding Netflix's profits back for the next several years, but should be well worth this short-term pain in the end.

So there's a solid investment case to be made for Netflix. But don't buy Netflix shares based on fat and rising EBITDA profits.

Management would tell you the same thing. Netflix doesn't include EBITDA profits in its quarterly earnings report; the company hasn't mentioned EBITDA in an SEC filing since 2002, and hasn't mentioned the metric in earnings calls since 2006 -- way before the whole streaming saga even started.

Lies, damned lies, and looking at the wrong numbers -- yep, that sure sounds like a tight family of dangerous deceptions.