Oil production out of the Gulf of Mexico has been slow to recover from the devastating blow it received from the Deepwater Horizon blowout. However, the decline in production has stabilized of late, and now the Gulf is primed for growth. In fact, its best days could lie ahead.

The following slide from Enterprise Products Partners' (NYSE:EPD) most recent analyst day presentation gives a glimpse of what production in the Gulf might look like in the years ahead. 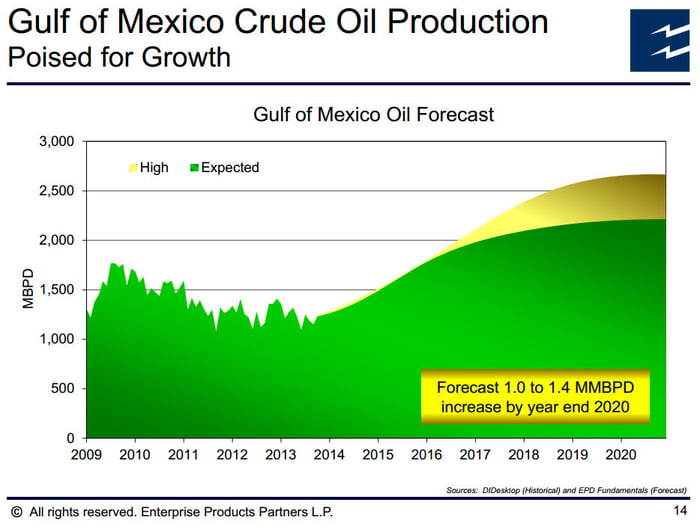 Enterprise Products Partners, which is a key logistics partner of oil and gas producers in the Gulf, sees production growth of more than 1 million barrels per day by the end of this decade. On the high end, oil production could nearly double from its post-Deepwater Horizon bottom.

One of the reasons Enterprise Products Partners is so bullish on the Gulf is because the industry currently has more rigs running now than it had before Deepwater Horizon. In fact, not only are there four more rigs running now for a total of 48, but 16 additional rigs are expected in the Gulf by the end of next year. These rigs are expected to bring the large inventory of recent discoveries online, with the top 25 holding more than 5 billion barrels of oil equivalent.

New major discoveries
Over the past few years, exploration and production companies made several major new discoveries in the Gulf. Late last year, BP (NYSE:BP), for example, announced it made what it's calling a "significant" discovery at its Gila prospect, which is 80% owned by BP and 20% owned by ConocoPhillips (NYSE:COP). While we won't know the extent of that discovery until appraisal wells are drilled, it looks like a big find for BP. It should help jump-start the company's reemergence in the Gulf following the blow it received for its part in the Deepwater Horizon disaster.

Meanwhile, Anadarko Petroleum (NYSE:APC) has had a lot of recent success exploring for oil in the Gulf. Last year, it announced a discovery at its 30% owned Phobos prospect, which is also 50% owned by Freeport-McMoRan (NYSE:FCX). Anadarko also announced a discovery at its Coronado prospect, which is 35% owned by ConocoPhillips. These discoveries are critical to keep oil production in the Gulf of Mexico growing.

Next wave of investors
Another important factor in the growth of the Gulf of Mexico is the fact that we're seeing new investors enter the region. ConocoPhillips, for example, is relatively new to the Gulf of Mexico. However, the company has invested heavily in exploration over the past few years. Those investments are paying off as ConocoPhillips is a partner on four significant oil discoveries including Gila, Tiber, Coronado, and Shenandoah.

Of particular interest is Shenandoah, which is an Anadarko Petroleum-led discovery. Last year, an appraisal well discovered that the reservoir could be two to three times bigger than the 300 million barrels of oil estimate that Anadarko originally thought was present at Shenandoah. That suggests the discovery could turn out to be a world-class development for Anadarko and ConocoPhillips, which will help to renew the excitement drillers have for the deepwater of the Gulf of Mexico.

Another major new investor in the Gulf is Freeport-McMoRan. The copper and gold giant bought its way into the Gulf last year when it acquired Plains Exploration & Production. However, it's not sitting by idly as the company recently emerged as the big winner in the Gulf's latest lease auction. The combination of development projects currently under way as well as exploration prospects in hand gives Freeport-McMoRan confidence in its ability to double its Gulf of Mexico production by the end of the decade.

Investor takeaway
With the Deepwater Horizon disaster now in the rearview mirror, producers in the Gulf are focusing on pushing production higher. The combination of massive finds is pushing veteran Gulf producers like Anadarko Petroleum and BP to continue investing while at the same time drawing in new investors like ConocoPhillips and Freeport-McMoRan. Add it all up, and the Gulf of Mexico is getting ready to really shine as production surges in the years ahead.