Harley-Davidson and Polaris Industries face headwinds in Europe, but each company has a strategy to overcome the challenges abroad.

Over the past three years heavyweight motorcycle registration in Europe has declined from 328,500 bikes in 2011 to 281,800 in 2013. This presents a problem for companies like Harley-Davidson ( HOG -2.33% ) and Polaris Industries ( PII -1.83% ) which each produce and sell 601+cc motorcycles. While they face similar problems, each company is handling the European decline differently.

Moving market share
In Harley-Davidson's biggest market, the United States, it has 54.9% of the heavyweight motorcycle industry. In Europe, the company had increased its market share by 0.7% to 12.8% by the end of 2013, but the total number of Harleys registered had declined.

The slowdown in the heavyweight motorcycle industry in Europe results from economic struggles in the region. Many see Harley's products as luxury items and the company's sales correlate with overall economic conditions. 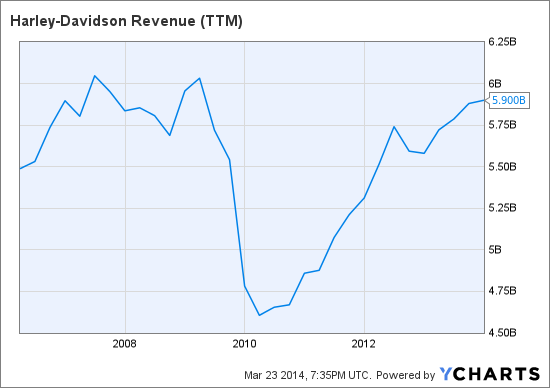 The chart shows how Harley's revenue dropped during the U.S. housing crisis. Economic problems in 2013 could have caused some of the motorcycle industry's decline. Europe is recovering from its previous year and despite setbacks surrounding the crisis in the Ukraine, predictions call for GDP to grow 1.5% in 2014 and 2% in 2015.

Harley had positive growth in France and Germany during 2013 and the company believes it is doing well in executing everything it can control. CFO John Olin said, "We will continue to focus on what we can control, which includes building our brand experience across Europe and expanding our distribution network in emerging markets in that region." The company hopes this plan will lead to gains in market share while the economy recovers.

More than motorcycles
While Harley-Davidson depends on the heavyweight motorcycle market in Europe, Polaris has a more diversified portfolio of products. 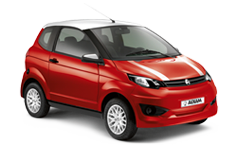 The company's small-vehicles segment has been doing particularly well in Western Europe and it helped grow the area's revenue by 177% during 2013. The purchase of Aixam, which has over 40 points of share in the European quadricycle market, primarily drove this growth.

The European, Middle East, and Africa, or EMEA, region was up 61% for Polaris's fourth quarter, driven by the launch of Indian Motorcycles and increases in side-by-side vehicle, snowmobile, and parts, garments, and accessories , or PG&A, sales. In Europe, Polaris has been outperforming rival snowmobile and off-road vehicle producer Arctic Cat. In its most recent quarter, Arctic Cat's European net sales fell by over $7.7 million. CEO Claude Jordan explained, "We experienced significant headwinds due to the European economy" and this also effects Polaris abroad.

As with Harley, many see Polaris and Arctic Cat's products as luxuries and their sales easily fluctuate with economic conditions. The off-road vehicle market, Polaris's core, dropped alongside motorcycles in Europe, but thanks to the company's product diversity it still had a successful year on the continent.

Turning around
The struggling European economy has had a negative impact on the heavyweight motorcycle market, which includes the Harley-Davidson and Indian Motorcycle brands. Harley-Davidson is doing all it can to grow its brand and market share in Europe and it should see sales increase if and when the economy recovers. Polaris has the advantage of product diversity and it has not seen its European sales drop. With the relaunch of Indian Motorcycles, the company could potentially take market share from Harley. For now, the company will enjoy the benefits of its small vehicle segment and its Aixam acquisition. Overall, both companies remain at the mercy of the European economy.