TransCanada Corp. and others with a vested interest in the Keystone XL pipeline have been waiting sometimes not-so-patiently for a ruling by President Obama on the final stage of the line. Should that ruling be negative, China will be better off for it.

At some point, there will be a new pipeline carrying Canada's bitumen away from its Alberta production site. The key question is whether it will be taken to refineries on the U.S. Gulf Coast, or maybe to the country's West Coast, preparatory to being loaded onto tankers for shipment to Asia. Whichever of the possibilities prevails, however, will make a big difference in both America's energy picture and geopolitics in general.

It's no secret that approval of the final part of a four-phase Keystone Pipeline system (the first three phases are already operational) has been awaiting President Barack Obama's imprimatur for some time now. The line was first proposed nearly a decade ago, in February 2005, by Calgary's TransCanada Corp. ( TRP ). The first three completed phases extend from Hardisty, Alberta, to refineries in Illinois or to others on the Texas Gulf Coast, via the hub and tank farm at Cushing, Oklahoma.

The Phase Four fight
The fourth phase -- still controversial and unapproved -- would also begin near Hardisty before heading south to Baker, Montana, where U.S.-produced crude would be added. It would then continue through South Dakota and Nebraska, where it would join up with the existing Keystone line at Steele City. It's the portion through Nebraska that is environmentally sensitive, and that will likely make or break the project's ultimate disposition. 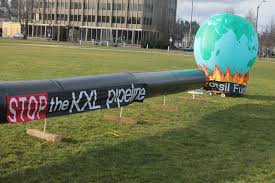 But producers in Alberta are hardly inclined to cease their operations in the face of a U.S. turndown for Keystone. Indeed, they have a couple of alternatives to knuckling under to dependency on the U.S. markets.

Pushing for a western route
For starters, Enbridge ( ENB ), TransCanada's Calgary neighbor, is pushing hard for approval of a proposed Northern Gateway line. That 36" diameter pipeline would begin in Brudenheim, Alberta, before heading straight west for about 730 miles to the coastal town of Kitimat, British Columbia. The 525,000 barrels that would constitute the line's daily capacity would then be loaded on tankers bound for Europe or Asia. (For the most part, China.)

But even though it would operate entirely in Canada, the Northern Gateway won't garner approval in the manner of a hot knife slipping through butter. It continues to face considerable opposition from Aboriginal groups, including the Yinka Dene Alliance, an organization formed in an effort to block approval of the line. Beyond that, there have been threats by First Nations groups to bore holes in the line, with the avowed intention of creating leaks.

Obviously TranCanada and other supporters of Keystone must convince the opposition and the powers that be in Washington, D.C., that transporting bitumen through the pipeline would be far safer than the current use of rail and barges. Enbridge, however, faces environmental opposition both to its pipeline and to the vastly expanded parade of tankers that would result along British Columbia's coast. The latter effort was potentially made more difficult during the past weekend by attention to the 25th anniversary of the Exxon Valdez oil spill in Alaska's Prince William Sound.

Many First Nations groups are united against the Northern Gateway proposal.

An Enbridge line approval would boost already expanding Kitimat. With a population of slightly more than 8,000, the town sits strategically on the Douglas Channel, more than 50 miles inland from the Pacific Ocean. As such, its tanker traffic would be at least somewhat protected from ocean storms. And while it's being considered as the terminus for the Northern Gateway, Kitimat is also the site of an in-the-works liquefied natural gas facility owned by Chevron and Apache. Further, another proposed LNG facility may be constructed near the town by a consortium led by Royal Dutch Shell.

Yet another alternative
But should both TransCanada and Enbridge be prevented from completing their proposed pipeline projects, there exists yet a third alternative for Alberta's producers. Kinder Morgan Energy Partners (NYSE: KMP) already operates a relatively small 710-mile Trans Mountain pipeline that begins in Edmonton, Alberta. The line carries Canadian bitumen to refineries and terminals in the center of British Columbia, the Vancouver area, and Washington's Puget Sound region.

Kinder Morgan has proposed expanding the line a dozen-fold, such that it would be capable of transporting about 600,000 barrels of crude per day. Approvals would seemingly come more easily for upgrading the already-exiting line, and the entire effort would almost certainly be cheaper than either of the other projects.

A Foolish takeaway
I urge Fools to carefully monitor events north of the border, given their significance for global energy. That watch should include attention to the three companies seeking a bitumen blessing. My nod for relative strength currently goes to Enbridge for its greater operational diversity, which includes renewables, such as wind and solar. More about that in a subsequent article.