As Albert Einstein might have said, it's all relative isn't it? This thought comes to mind when considering the performance of FedEx (NYSE:FDX) and United Parcel Service (NYSE:UPS) over the winter period. An unusual confluence of events came together to hit both companies over the period, and investors should not be quick to superficially judge their future prospects based on an untypical quarter.

While most attention has been focused on the disruptions caused by the extreme winter weather in the U.S., there were three other factors involved as well.

First, the Christmas selling season contained six fewer days than last year, creating a natural tendency for bottlenecks in shopping to be created. Throw in the poor weather (which reduced feasible days to go shopping) and the result was a massive spike in e-commerce shipments.

Second, partly in response to weather and issue of reduced shopping days, retailers increased their last-minute promotions. This led to more last-minute shipping.

Third, the increase in e-commerce came in higher than many, including UPS, had expected.

Arguably, UPS was hit harder than FedEx by the weather because it saw its adjusted operating profits decline 12.7% in its fourth quarter. UPS's response is to invest in technology in order to generate operational efficiencies. The good news is that these measures should improve the company's performance anyway and are not just related to dealing with unusual spikes in demand.

Ultimately, these effects had a significant effect on FedEx's operations. According to FedEx CFO Alan Graf on the recent conference call:

FedEx's profitability improvements are on track
Moreover, FedEx's plan to improve profitability by $1.6 billion before the end of 2016 was declared to be "not only on track, but probably ahead of plan" on the conference call. This is impressive, bearing in mind the difficulties in the quarter and that fact that global growth has not being as strong as FedEx's hoped when it outlined its plan in 2012. Given that operating income was only $2.5 billion in 2013, the profitability improvement planis a significant earnings driver for the company. Development on this front is a lot more meaningful than one bad quarter of weather.

In fact, even with the bad third quarter, FedEx is still managed to increase operating income margins across all of its segments. 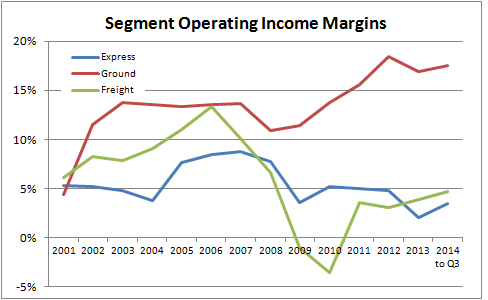 Where next for FedEx and UPS?
Ultimately, FedEx was forced to reduce guidance to $6.55-$6.80 for the full year to May 2014.  However, the real question is over earnings for 2015, because the analyst consensus implies a near 33% increase in EPS from the mid-point of FedEx's updated guidance for 2014. Obviously, a lot of this depends on the share repurchase program and the impact of productivity improvements in 2015.

The good news is that the productivity plans are on track, operating income margins are improving, and FedEx sees global GDP growth improving from 2.8% in 2014 to 3.1% in 2015. Add in the long-term opportunity for burgeoning e-commerce sales and the possibility of world trade improving, and FedEx and UPS have good prospects going forward.