Turbines are important, but transmission is vital to the wind industry's success.

The Keystone XL saga has been playing out for some time now, and it would seem that the uncertainly regarding its future will soon come to a close. Until that time, though, it will continue to distract the public from other energy stories -- in particular a power transmission project that's charging up the Midwest.

Although no protesters are chaining themselves to the White House fence over this (as Keystone XL protesters did earlier this month), it still represents a potential hurdle in the development of numerous wind power projects.

A miss in Missouri?
Long-distance power transmission is essential to the widespread adoption of wind power. Unlike the network of pipelines transporting natural gas throughout the country, wind power doesn't have a wide distribution network. Attempting to address this, Clean Line Energy Partners is in the process of developing the Grain Belt Express Clean Line. Providing up to 3,500 MW of wind-generated electricity, the proposed high-voltage direct current, or HVDC, transmission line would transport wind energy originating in Kansas to Missouri, Illinois, Indiana, and other markets farther east.

The proposed project is not without its opponents; Missouri landowners have been very vocal about their disapproval of the project. Attempting to block the approval of the project, the Missouri Landowners Alliance has filed a protest with the Federal Energy Regulatory Commission, and it has filed a complaint with the Missouri Public Service Commission. Despite these actions, Clean Line, after what it refers to as "an extensive public involvement and routing process, during which [it] met with landowners, tenants, conservation and agricultural organizations, elected leaders, community leaders, and others," announced this week the proposed route for the approximate 750-mile HVDC line -- 206 miles of which go through Missouri. 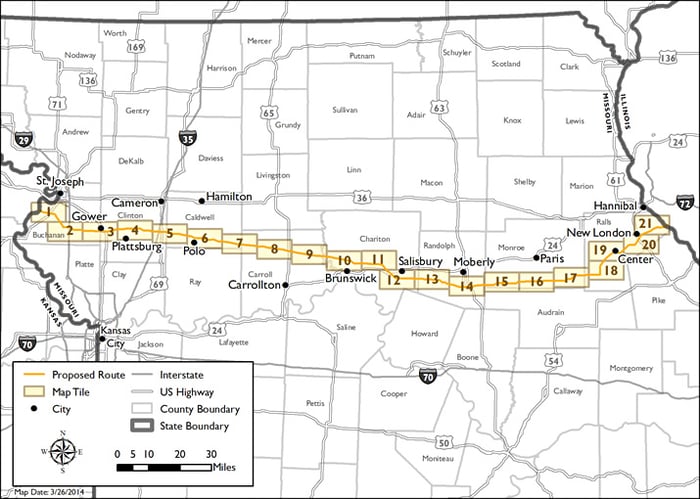 Rooting for the route
Clean Line, in an attempt to appeal to Missourians, is partnering with local manufacturers to develop the project. A global leader in power and automation technologies, ABB Ltd. ( ABB 0.34% ) will manufacture transformers for the project's collector system, where new wind farms will connect to the line. ABB is no stranger to massive power transmission projects. This past month alone, the company won a $110 million order to strengthen the power infrastructure in Saudi Arabia, and it won a $45 million order to strengthen the Swedish power grid. It's also no stranger to the U.S. market -- revenues from the Americas accounted for $3.22 billion of the $11.37 billion in total revenue.

Also vested in approval of the project is General Cable ( BGC ), which Clean Line selected to manufacture of 23 million feet of steel core for the transmission line conductor and to manage ongoing inventory and logistics. For this and other projects, the supply orders for General Cable are approximately $100 million. Certainly not insubstantial, this pales in comparison to the $1.55 to 1.60 billion in revenue the company is guiding for in the first quarter.

Other endeavors
Although the Grain Belt Express is most noticeable in the news, Clean Line has four other projects in the works: Centennial West, Western Spirit, Rock Island, and Plains and Eastern. 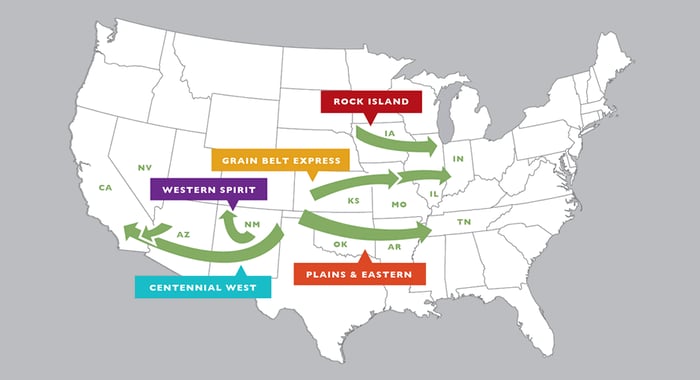 Like with Grain Belt, Clean Line has secured relationships with other companies to develop the projects. For example, Clean Line has selected Fluor ( FLR -2.26% ) to provide engineering, procurement, and construction services for the Plains and Eastern Clean Line -- a transmission line which, according to the company, "will allow for the delivery of 3,500 megawatts of power and interconnect approximately $7 billion of new clean energy projects."

The company also forged a strategic alliance with Siemens AG ( SIEGY -0.81% ), which will provide direct current technology solutions for the Rock Island transmission project. Additionally, Clean Line states that it "will work together to develop, design, and implement the HVDC converter stations, where the direct current will be converted to alternating current and vice-versa." Siemens has another interest in the approval of the project. As one of the major suppliers of wind turbines to the American market, Siemens would surely be in high demand to provide its turbines to project developers if there were to be major advances in the energy infrastructure.

Foolish takeaway
Even though the U.S. had over 12,000 MW of wind power under construction at the end of 2013, according to the American Wind Energy Association, wind power has always played second fiddle to solar in the U.S. But, that's not to say that there aren't plenty of signs that wind power is becoming an increasingly viable option for energy production. It won't be easy. There will always be opposition, but it's worth keeping a close eye on industry developments if investors are considering investment in wind-power affiliated companies.