Teva faces patent expiration on its $4 billion-a-year Copaxone in May.

The Supreme Court dealt the latest blow to Teva's bid to shore up its Copaxone revenue stream this week. Teva had hoped the Court would take up a lower court ruling that invalidated patents protecting Copaxone until September, effectively moving up Copaxone's patent expiration to May. However, the high court opted for a second time against adding the case to its calendar, casting new doubt on Teva's ability to outmaneuver generic threats from Mylan ( MYL ) and Novartis ( NVS 0.06% ). 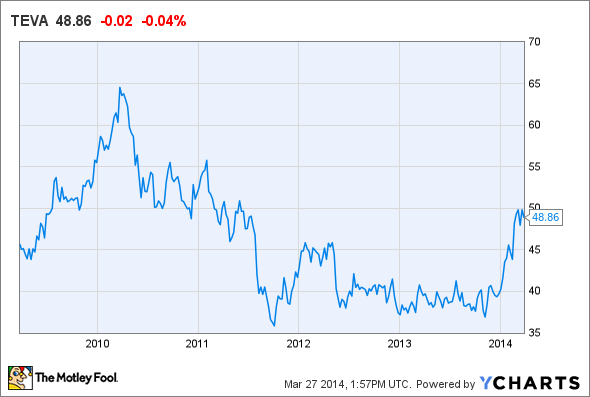 Shuffling the deck
The Court's decision wasn't unexpected, but it would have been welcomed by Teva given it's thigh-deep in attempts to convert patients currently taking once-daily Copaxone to a thrice-weekly 40 mg variation that is still covered by patents.

So far, Teva has successfully shifted roughly 9% of its patients to that new formulation. Since Copaxone had sales of $4.3 billion last year, that means roughly $400 million worth of sales have been protected.

That's bad news for Mylan given the company has been planning for Copaxone's patent expiration since it inked a deal for U.S. rights to Indian pharmaceutical company NATCO's Copaxone biosimilar in 2008. It's also bad news for Novartis' Sandoz, the company's generic business that has already commercialized three biosimilars. Sandoz has been working with Momenta ( MNTA ) on a Copaxone copycat since 2006. Previously, Sandoz and Momenta successfully collaborated on developing the first generic version of Lovenox.

Of course, it remains to be seen if the FDA will green-light either Mylan or Sandoz's version of Copaxone. Both have ANDAs filed and pending at the agency; however, the lack of a transparent path to commercialization for complicated generic biologics has some wondering when the FDA will announce a decision.

That has some investors increasingly optimistic that the hit to Teva's top line from Copaxone's patent loss will be less than feared last year. One of those investors, billionaire George Soros, used last year's sell-off to make Teva his fund's single largest holding exiting 2013.

Fool-worthy final thoughts
Even if the path to approval is uncertain, biosimilars will inevitably arrive for a variety of biologics, including Copaxone. Sandoz, for example, already markets generic versions of Neupogen and Epogen.

However, just how much share biosimilars will eat away from branded versions remains an important question. Many believe that biosimilars pricing will undercut brands by about 30%. That's far less than the average 80% discount generics of small molecule drugs like Lipitor command. Since the price advantage will be less, Teva may see its post-expiration sales slide far less than the industry is used to. Historically, makers of small-molecule compounds have seen revenue drop 70% to 90% once generics hit the market. Industry watchers think branded sales of biologics may slip just 30% in the first two years.

If Teva is able to convert patients to the new, longer lasting formulation, and it holds onto more market share for the original formulation (if biosimilars arrive), then Teva's future won't be as bleak as investors feared when they sent shares to five-year lows during the past two years.