The threat to $4 billion in sales for Teva's (TEVA) blockbuster Copaxone has the company making moves to protect its MS market share.

Drug makers have a love hate relationship with the FDA. The U.S. regulatory watchdog is responsible not only for approving their drugs, but also for approving generic competitors. This year, the FDA could be both Teva's (TEVA -0.46%) best friend and worst enemy.

The agency has already given Teva the go-ahead for its new higher dose Copaxone formulation, a move that could significantly slow a Copaxone cliff-dive when the top selling MS drug loses patent exclusivity in May. However, the FDA could also soon approve a Copaxone biosimilar from both Mylan (MYL) and Novartis Sandoz and Momenta (MNTA) too.

That risk to 20% of Teva's sales had investors heading for the exits from the company's 2010 peak to their 2013 low.  However, hopes that Teva won't endure as much top line damage as feared has sent shares higher this month. 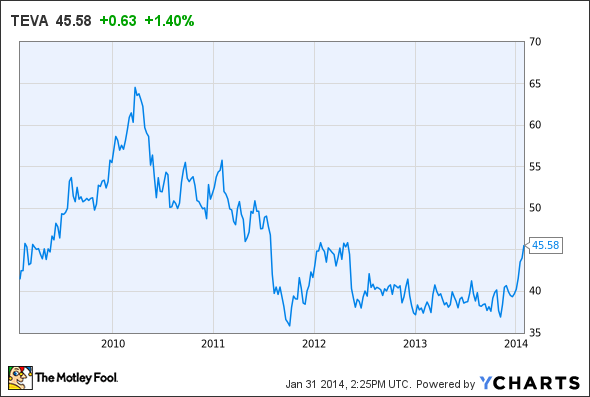 Overblown threat?
There's little question Copaxone is a significant drug for Teva and that the loss of exclusivity would eat away a large share of the drug's $4 billion in annual sales.

However, there is some debate whether a biosimilar from Mylan will win the FDA's nod ahead of the May patent expiration. Historically, most generic drugs have been based on fairly easily replicated formulations. As a result, those generic equivalents are close enough to the original for the FDA to feel confident there won't be any unplanned risks tied to their use.

Copaxone isn't one of those easily replicated drugs. It's a more complex biologic instead. That presents the FDA with a whole new slate of considerations it needs to address, including whether biosimilars pose bigger risks to patients than traditional generic equivalents.

Mylan hopes the FDA will decide biosimilars don't need to be bio-exacts. To bolster its case, the company's Copaxone formulation is the version developed by Indian pharmaceutical company Natco. Mylan acquired the U.S. marketing rights from Natco, which developed and launched its version in India in 2007, during 2008.  That means Mylan has been able to provide years of data for FDA review

Ducking and moving
When it comes to the generic threat, Teva hasn't had its head in the sand. It's been working hard on solutions to blunt the risk of lost sales. Unfortunately, its efforts to solidify Copaxone's revenue stream beyond expiration up until now have come up short.

A potential successor drug, laquinimod, also known as Nerventra, failed to significantly outperform a placebo during clinical trials back in 2011 That drug was dealt another arguably inevitable blow when the EU's Committee for Medicinal Products for Human Use, or CHMP, decided this month that the drug's risk reward profile didn't warrant approval.

In addition to that fumble, Teva has also failed in multiple lawsuits aimed to delay the launch of generic competitors. In July, Mylan and Sandoz won dismissal of Teva's suit claiming the two are infringing on Teva's patents.

The absence of a successor drug and legal failures mean Teva will have to either hope it can convert patients to its new longer lasting Copaxone, or that the FDA will opt against -- or drag its feet -- on the biosimilars.

Previously, a similar analysis resulted in the FDA giving the go-ahead to Sandoz and Momenta for enoxaparin, a biosimilar to Sanofi's Lovenox that notched $320 million in U.S. sales during 2012. Both Watson and Amphastar have since launched their own Lovenox biosimilars too. Those approvals arguably provide a path for the FDA to follow in judging the Copaxone biosimilars, but given Lovenex is a less-complex drug than Copaxone the path may not be as direct as some may hope.

Regardless of whether the FDA does green-light Mylan, Sandoz and Momenta, Teva is working on converting as many of its current Copaxone patients to its new formula. That newly approved version is dosed three times a week, roughly 50% less often than the existing Copaxone formulation. That dosing schedule may prove a compelling marketing advantage that allows Teva to hold onto a much larger portion of the drugs sales than previously feared. If so, investor worries may end up proven overblown.

Todd Campbell has no position in any stocks mentioned. Todd owns E.B. Capital Markets, LLC.  E.B. Capital's clients may or may not have positions in the companies mentioned. Todd also owns Gundalow Advisor's, LLC. Gundalow's clients do not have positions in the companies mentioned. The Motley Fool recommends Momenta Pharmaceuticals and Teva Pharmaceutical Industries. We Fools may not all hold the same opinions, but we all believe that considering a diverse range of insights makes us better investors. The Motley Fool has a disclosure policy.