Generic drug launches will pick back up in 2014 and 2015, boosting sales for drugmaker Mylan.

Mylan (MYL) investors had a great 2013, with shares soaring nearly 60%.  However, Mylan's sales inched up just 0.5% higher through the first nine months of 2013.  So, why have Mylan's investors been so bullish?

Answering that question means recognizing that the number of brand name drugs that lose patent protection can make or break the year for generic drugmakers like Mylan. That so called "patent cliff" took a breather in 2013, as only $28 billion worth of drugs lost their market exclusivity. That was down considerably from the $65 billion that went off patent in 2012 and meant Mylan's growth slowed in 2013 from its torrid pace in 2012. 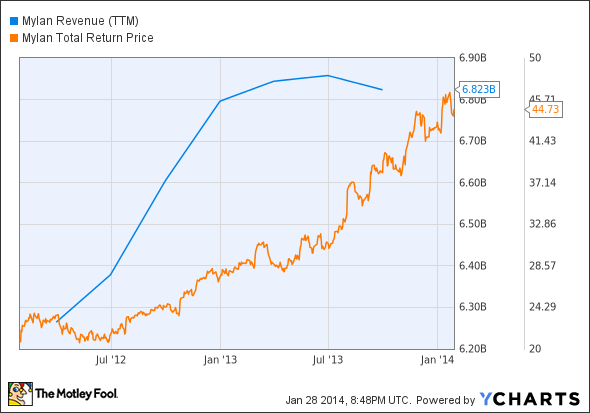 However, the pause in expiration is yesterday's news and forward looking markets are already pricing in opportunities tied to patent expiration coming this year and next.  The value of drugs coming off patent is estimated at $34 billion in 2014 and an eye-popping $66 billion in 2015.

Launching new drugs offers sales growth
A slower pace of patent expiration last year meant that Mylan's new products sales sank to just $108 million in the third quarter, down from $299 million a year ago. New launches were worth just $229 million in sales during the first nine months of 2013, down 70% from $783 million in 2012.

However, last year's lackluster launch schedule may set the stage for improving year-over-year growth as launches pick up steam this year. To that point, Mylan has already rolled out three new drugs in January.

The first is a generic version of Pfizer's overactive bladder drug Detrol. The drug has been a solid revenue producer for Pfizer, racking up sales of $571 million for the 12 months through September.

The second is an alternative to Novartis' immune suppressant Myfortic. Novartis, which is also preparing for the patent loss on its $1 billion Sandostatin this year, sells Myfortic as a treatment for kidney transplant patients to help prevent rejection. Novartis generated U.S. sales of $239 million in 2012 and $306 million in the 12 month period ending September.

Building blocks for a a solid year
The combined value of those three launches is over $1 billion dollars. That's a good start, but there's more coming, including the possible launch of generic Copaxone.

Mylan hopes to be among the first to roll-out an alternative to Teva's (TEVA 1.49%) $1 billion-a-quarter multiple sclerosis drug, which loses patent protection in May and accounts for 21% of Teva's global sales.

To capture that market share, Mylan partnered with Indian pharmaceutical company Natco in 2008 for the rights to their Copaxone biosimilar.However, while Mylan claims it's ready to launch that version when Teva loses patent protection in May, Mylan and Natco still need to get the green light from the FDA.

However, Mylan still has plenty of chances for growth without FDA approval for that particular product thanks to 287 ANDAs pending FDA approval. Forty-one of them are potential first-to-file drugs representing $24 billion in annual brand sales, according to IMS Health. That suggests there will be plenty of other launches over the next two years.

Fool-worthy final thoughts
Mylan is doing a great job of converting sales growth into shareholder friendly earnings. Since 2008 the company's adjusted earnings per share have grown a compounded 34%, which outpaces the respectable 10% compounded revenue growth in the period.

The launch of these three generics, future launches, and the integration of Agila suggest Mylan's track record of earnings success will continue this year too. Mylan is guiding for 12% top and 19% bottom line growth in 2014, and analysts have bumped up their 2014 earnings estimate to $3.39 per share from $3.34 last fall.

Looking even further ahead, Mylan's long term projection is for 13% compounded annual revenue growth over the coming five years, resulting in earnings per share of $6 in 2018.  If they can deliver on those goals, Mylan shares may still have room to move higher.

Todd Campbell has no position in any stocks mentioned. Todd owns E.B. Capital Markets, LLC.  E.B. Capital's clients may or may not own shares in the companies mentioned.  Todd also owns Gundalow Advisor's, LLC.  Gundalow's clients do not own shares in the companies mentioned. The Motley Fool recommends Teva Pharmaceutical Industries. We Fools may not all hold the same opinions, but we all believe that considering a diverse range of insights makes us better investors. The Motley Fool has a disclosure policy.