Apple (NASDAQ:AAPL) is expected to expand into the health care market with the release of iOS 8 later this year. Its Healthbook app -- which will reportedly serve as a mobile hub for personal health data -- is expected to take advantage of the motion-sensing capabilities of the new M7 chip, which was introduced in the iPhone 5S. Apple has hired top talent from several medical device and sensor companies and held meetings with the FDA regarding this work.

All of these facts have fueled speculation that Apple's long-rumored smartwatch will boast health monitoring capabilities that easily exceed the capabilities of wearable devices like Nike's FuelBand and Samsung's Galaxy Gear. According to a report in 9-to-5 Mac, Apple's Healthbook app is designed to track blood sugar levels, heart and respiration rates, hydration, weight, and physical movements.

Apple's iPhone 5s -- the first iPhone to use the M7 chip. Source: Apple.

Apple already has a large footprint in the health care industry thanks to native EHR (electronic health record) apps for physicians and medical apps for iOS devices. However, those apps benefit third-party developers and don't necessarily translate to higher sales of iPhones or iPads.

Therefore, iOS 8 and Healthbook could present Apple with a golden opportunity to expand its presence in the health care industry. Two major strategies, in my opinion, could turn Apple into a health care heavyweight by the time iOS 8 is released.

1. Why doesn't Apple acquire Nuance?
Nuance (NASDAQ:NUAN), the speech recognition company best known as the creator of Siri, has long been considered a prime acquisition target for Apple. Carl Icahn's rising stakes in Nuance and Apple have led to speculation that the activist investor will push for a marriage of the two companies -- something he insists he will "never" do.

Thanks to higher demand for these products, Nuance's health care segment generated $227.3 million in revenue last quarter and accounted for 46% of the company's top line. If Apple were to acquire Nuance, it could closely integrate Nuance's 360 products into the Healthbook ecosystem. Moreover, Apple wouldn't need a Nuance-free version of Siri, which has long been rumored to be in development.

Apple would also inherit Nuance's partnerships with Cerner and Allscripts, which integrate Nuance's speech recognition technology in their EHR apps. With a market cap of $5.35 billion and $2.36 billion in debt, Nuance would be an easy acquisition target for Apple, which finished last quarter with $40.77 billion in cash.

2. What can Apple learn from Microsoft?
Although the exact features of Healthbook aren't confirmed yet, it's likely Apple will rely on iCloud to store its personal health data.

However, we should consider Google's (NASDAQ:GOOGL) and Microsoft's (NASDAQ:MSFT) previous efforts in the EHR market to better understand Apple's situation. Google tried to tie together the EHR universe with Google Health, but it ultimately failed due to market fragmentation, privacy concerns, and the lack of participation from hospitals and insurers. Microsoft took advantage of its position in big data to roll out HealthVault, a cloud-based EHR system, in 2007. 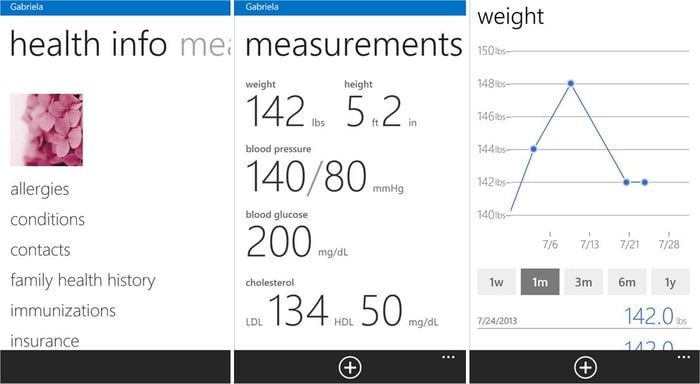 Microsoft didn't force users to use the HealthVault software or app to access the system. Instead, it inked partnerships with EHR companies like Allscripts and Greenway to integrate their mobile EHR apps with HealthVault, allowing the data to be synchronized across both platforms. The data could then be accessed from the HealthVault site via a web browser or mobile app. Instead of trying to tie together the entire EHR market as Google tried to do, Microsoft offered EHR companies mutually beneficial partnerships.

iCloud certainly would be an ideal central hub for storing health data, but the platform primarily caters to the consumers' need to store photos, music, documents, applications, bookmarks, iBooks, and notes. Unfortunately, there have been complaints about synchronization issues between various iOS devices using iCloud.

Therefore, Apple should give iCloud a HealthVault-like EHR upgrade before iOS 8 is released and ink new deals with EHR companies for direct integration. Apple might even be able to convince companies like Allscripts and Greenway to simultaneously sync their EHR data to HealthVault and Healthbook.

The Foolish takeaway
Many medical app and peripheral developers prefer iOS over Android since the hardware and software configurations across a single generation of devices are identical. By comparison, Android's fragmented universe can cause problems with stability and performance.

Acquiring Nuance and imitating Microsoft's HealthVault strategy could turn Apple into a major force in health care by the time iOS 8 is unveiled later this year. More importantly, those two moves will create a more robust and reliable framework for Healthbook's users.