Please ensure Javascript is enabled for purposes of website accessibility
Free Article Join Over 1 Million Premium Members And Get More In-Depth Stock Guidance and Research
By Pratik Thacker - Mar 28, 2014 at 9:42AM

Despite a dull outlook, there are some interesting reasons to add Deckers to your portfolio.

Most footwear retailers are performing well and have been posting great numbers despite declining consumer confidence in the U.S. Proof of this came when Deckers Outdoor Corporation ( DECK 5.02% ) posted its fourth-quarter results, which came in way ahead of the Street's estimates. However, Deckers' dull outlook worried investors.

Snapshot of the performance
Driven by higher demand for Deckers' products, revenue climbed 19.2% to $736 million over last year's quarter. The growth indeed came from all sides and across all segments as the retailer sold full-priced products across all of its geographies.

Going by segment, the UGG brand, which makes up 94% of Deckers' revenue, grew sales 18% from the year-ago quarter. High demand for products like boots drove this demand as cold weather forced people to buy winter wear.

Promising performers included the retail segment as well as the e-commerce segment. The retail segment grew sales 31.4% to $178 million as 40 new stores and comparable-store sales growth of 6.1% added to its revenue. Even revenue from Deckers' e-commerce business jumped a whopping 33.9% to clock in at $117.3 million. This online business growth not only came because of higher demand for the UGG, Sanuk and Teva brands, it also came because of the introduction of new international websites.

One of the key problems for Deckers has been the rising cost of sheepskin, which has increased the company's manufacturing costs. However, sheepskin prices have declined recently and this has shown up in Deckers' bottom line and gross margin. Earnings for the quarter surged 46% to $4.04 per share while gross margin expanded 480 basis points to clock in at 51.1%.

Stacking up well against peers
Deckers has been doing well in comparison with other industry players such as Nike ( NKE 1.41% ) and Wolverine World Wide ( WWW 2.46% ). The stock price appreciation of the three footwear retailers appears in the chart below: 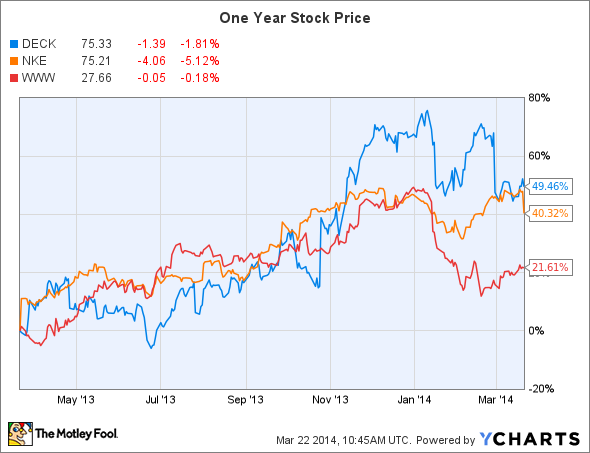 Deckers Outdoor provided a higher return than these peers at 49.5% over the last year. This mainly occurred because higher demand for its products resulted in growing quarterly numbers.

Nike, too, has performed well over the last year as reflected by its stock price appreciation of 40.3%. Nike has been able to do well mainly because of its drive for innovation. Its continuous launches of innovative products have helped it gain customers' attention. For example, its Nike+ FuelBand attracted people who want to keep track of how much calories they burn and how they burn them. Also, its light-weight running shoes have been a customer favorite. In fact, Nike is on its way to launch its Nike MAG line with power laces in 2015. Moreover, the company has advertised its products well by marketing them at sporting events such as the Olympics and the upcoming World Cup.

Wolverine World Wide has given the lowest return of this group at 21.6%. This was mainly because the company has witnessed less customer interest in its products. Although Wolverine posted a 13.6% increase in its fourth-quarter revenue, the jump mainly occurred because it bought the performance and lifestyle businesses of Collective Brands. Demand for the company's heritage brands has been decreasing. However, the company has taken steps to attract customers. It plans to introduce new products and it has also strengthened its marketing efforts, as it has partnered with celebrities to improve demand.

What the future has in store?
Despite delivering a strong quarter and outpacing its peers in terms of stock price performance, Deckers Outdoor posted a dull outlook for the current quarter. It expects first-quarter revenue to grow by 6% along with a loss of $0.16 per share. The company expects a loss because of the costs associated with opening 28 additional stores.

In order to grow its revenue further, the footwear retailer has been eyeing expansion into new regions. It plans to expand its presences in China and Japan. Moreover, it plans to introduce new products which should instigate demand.

Additionally, Deckers has taken steps to decrease its dependence on sheepskin, which has been prone to price fluctuations. It has been trying to increase the proportion of non-sheepskin material in its merchandise by introducing casual footwear made from a different material. In fact, it has developed UGG Pure, a new material which will reduce its dependence on sheepskin. Therefore, this company has formulated strategies to grow its top and bottom lines.

Final thoughts
Although a dull outlook provides reason for caution with Deckers, many positive factors are also present. The company's past performance has been good, and its strategies of increasing its sales and keeping its costs under check look interesting. Investors should consider betting on this growing retailer.