Investors need to understand the challenges of the fast-casual segment before plunking down their investing dollars.

Fast-casual is the restaurant sector's hottest trend. Championed by Chipotle Mexican Grill ( CMG -2.07% ), many new players are rising by ditching table service in exchange for faster and higher-quality food. In 2013, fast-casual restaurants torched the competition with unit growth. However, the eye-popping growth potential of this trend has Wall Street bullishly tolerating some eyebrow-raising valuations.

Not all fast-casual stocks will beat the market. Before investing, one really needs to assess the risks in the fast-casual segment.

Competition is fierce
With various companies celebrating "long runways" for growth and very few fast-casual plays on the stock market, you may be lulled into believing that the competition is weak and all of the fast-casual options will beat the market. However, the space is getting crowded.

Consider Chicago's own Potbelly ( PBPB -3.09% ) as an example. With its small size -- around 300 locations -- management expects 10% unit growth to continue for a long time. It's the only play of its type on the stock market, but the overall fast-casual sandwich shop space includes many privately-held companies. Some competitors have much larger footprints and better financial positions. In comparison with Potbelly, Jimmy John's has a better-known concept, a bigger size with over 1,600 locations, and a faster growth rate as it has been adding over 200 locations per year. Financially speaking, Firehouse Subs's CEO Don Fox has said that his company doesn't even need an IPO because the chain doesn't really have "any significant capital needs."

So, publicly held fast-casual chains face privately held competition, but even beyond that many old restaurants are attempting rebrands to capitalize on the fast-casual trend.

Captain D's may be 45 years old, but it has made recent changes such as introducing grilled fish as an alternative to fried fish and attempting to give itself a chill beach look. These changes have apparently been successful as the chain's comp-sales increased 3.2% in 2013.

As you can see, the fast-casual market goes far beyond what you see on Wall Street. Many privately-held chains compete in this market, and some non-fast casual chains have shifted toward becoming fast-casual. Not all of the players will succeed in the end.

Fast-casual isn't always fast
The term "fast-casual" is often loosely used. It often just refers to a restaurant that doesn't use waiters and serves high-quality and/or trendy food. The term doesn't always mean speedy and efficient, although quickness has been an important factor in Chipotle's rise to the top.

Chipotle has a four-pillar strategy for increasing customer throughput by speeding up transactions. Pillars include training new employees outside of peak hours and having a staff person stock food before the restaurant needs it so that the line never has to turn its back on customers. This strategy resulted in Chipotle's huge 5.6% comp-sales increase in 2013.

Panera ( PNRA ) recently had to address the customer throughput issue. In the third quarter of 2013, the chain's transactions fell 1% -- the equivalent of just six to 12 transactions per day per location. Profits literally walked out the door because of unwillingness to wait in slow lines. To fix the falling transactions, the Panera workforce increased by 35 hours per week per location, though whether this actually speeds up operations has yet to be seen.

Another reason for speedy success comes from Chipotle's user-friendly menu. The company offers a simple and streamlined menu. The only real customer decisions happen when the customer chooses which ingredients to add while going down the food assembly line. Panera admits that its menu recently grew exceedingly complex, which led to longer customer decision times and resulted in slower throughput.

To fully maximize earning potential, a fast-casual player needs to be...well, fast. Many are not. 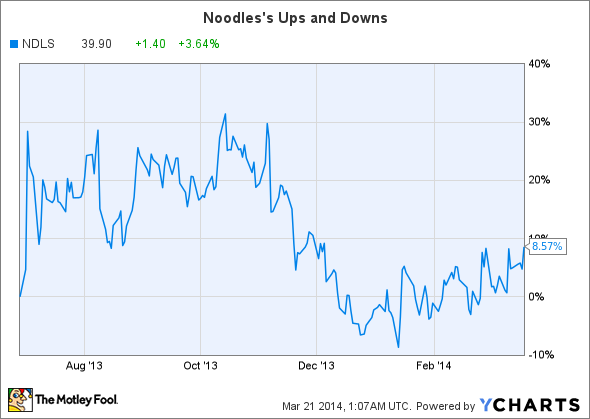 When Noodles ( NDLS -1.25% ) went public, the stock skyrocketed from $18 per share to over $50 per share as investors went bananas over the 300+ location chain's plan to expand to 2,500 locations. Since then the company has turned in positive results -- such as 2013's 66% net income increase and 3% comp-sales increase -- but investors have turned cautious as Noodles still totes a P/E over 100. A secondary offering at $39.50 also contributed to the stock's decline.

Noodles's business performed, but its stock did not. I believe it will perform long-term as management hits growth targets and improves margins, but in the meantime investors will have a wild ride. Many investors can't take the ups and downs.

Closing thoughts
The market has been in a fast-casual frenzy and it's easy to get swept away. With two more IPO's on tap -- Zoe's and Papa Murphy's -- the party keeps on raging. To be sure, many opportunities exist, but not everything fast-casual is worthy of your investment.