Rocky markets can take a toll on even the most stalwart investor, but selling dividend-paying companies into weakness isn't your best bet. In the past, dividend investors have been much better served by taking a long view that allows dividends to offset Wall Street's whims and whispers.

That could be particularly true for these three dividend-paying health-care companies: GlaxoSmithKline (NYSE:GSK), Merck (NYSE:MRK), and Quest Diagnostics (NYSE:DGX). They not only pay healthy dividend yields that can blunt the pain of a sell-off, but they're also strong performers during the coming quarter. That suggests investors may not want to sell them, and investors who have been considering them may want to step in and buy them. 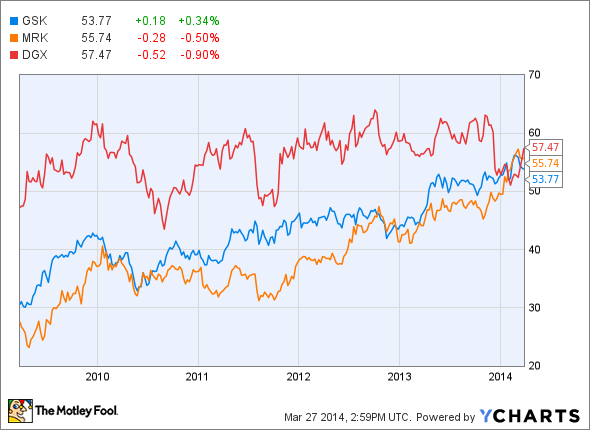 The strongest dividend
GlaxoSmithKline's product lineup includes the most successful asthma medication on the market. Advair is not only among the mostly widely used drugs for treating asthma, but it's also a major moneymaker. The drug posted global sales of more than $8 billion last year, but it's not the only asthma drug in GlaxoSmithKline's catalog. GlaxoSmithKline also markets blockbusters Flovent and Ventolin. Those three drugs notched nearly $12 billion in sales from respiratory therapies last year. That market-leading position should be stronger this year given the FDA approved two more potential respiratory blockbusters last year. Those two drugs, Breo Ellipta and Anoro Ellipta, are used to treat chronic obstructive pulmonary disease and analysts project the two could eventually generate a combined $2.7 billion in peak annual sales.

Although important, asthma and COPD drugs aren't the only products propping up the company's sales. Glaxo delivered more than $42 billion in revenue last year and nearly $9 billion in profit after taxes, thanks to drugs designed to treat a variety of diseases including cancer and cardiovascular disease. The company also has an $8 billion consumer health-care business. Those are all good reasons to take a chance on its shares, but for those requiring another reason to step in during a rough-and-tumble tape, GlaxoSmithKline's shares have managed to climb in eight of the past 10 second quarters, producing an average 4.8% return. Importantly, GlaxoSmithKline's forward dividend yield is 5.7%, which means that even if shares do fall next quarter, its dividend will help ease any pain.

Quickly recovering
The patent cliff took a toll on Merck's top line when its top-selling asthma drug Singulair lost patent exclusivity in 2012. Merck also lost protection on Temodar and Maxalt last year, threatening another $1.5 billion in sales. However, it's not all bleak for Merck given the company still expects sales of $42 billion to $43 billion and earnings of $3.35 to $3.53 this year. While that's down from the $44 billion and $3.49 per share recorded last year, Merck's future may brighten thanks to promising cancer drug MK-3475. Strong performance in trials as a melanoma treatment and FDA breakthrough status has investors hoping for a quick and easy path to approval. The drug may also offer opportunity as a therapy for non-small cell lung cancer. In addition to MK-3475, Merck also has late-stage studies under way in ovarian cancer, diabetes, psoriasis, and Alzheimer's disease.

Those opportunities could put Merck back on a path to sales and profit growth, but for investors needing an extra push toward owning shares, it's worth noting that Merck has also gained in eight of the past 10 second quarters, posting a nearly identical 4.8% average return to GlaxoSmithKline. It's even less correlated to the S&P 500 than GlaxoSmithKline at 0.48 for the period, which means that even if markets fall, its shares may not. If Merck's shares do drop, the company pays a 3.2% forward dividend yield that may help offset any weakness.

Additionally, Quest is in the midst of a restructuring that it hopes will save it $500 million in annual costs. If so, the company's solid cash stream, which helped Quest repurchase $1 billion in shares last year, should continue to reward investors. It is guiding investors to expect $900 million in cash from operations and $3.90 to $4.10 in earnings per share this year. That cash flow and solid earnings outlook should provide investors with a healthy dose of stability, but for those wondering if headwinds will be too strong this spring, shares have also been solid performers in the second quarter. Over the last 10 years, shares are up eight times, producing an average 4.6% return. Investors should also know that Quest does have the highest standard deviation of these three companies for the period, which means it may be more volatile, and the highest correlation to the market of the three, which means it's most likely to follow the market's path. Regardless, its 2.4% forward dividend yield appears rock-solid given its cash flow.

Fool-worthy final thoughts
Investors shouldn't be jumping in an out of stocks based on emotion. Instead, taking a calculated approach can produce impressive returns over time, especially for dividend-paying companies. GlaxoSmithKline and Merck aren't free of business challenges, but they're both large drug developers with a proven history of creating innovative and dividend-friendly therapies. If big pharma isn't on your dividend wishlist, lab testing giant Quest may fit the bill given a larger, longer living population is likely to increase rather than decrease testing demand over the coming decade.